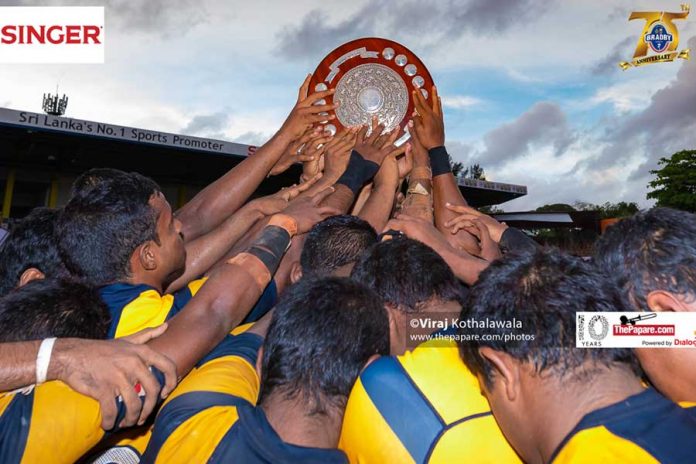 In his 2015 award-winning movie, Leonardo Di Caprio played the role of a man who was left for dead after being mauled by a bear. In a harsh winter, he was fending for himself and against all odds, dragging his badly battered body across the dirt, some of his limbs hanging by a thread. A human rag doll– marooned and seemingly with a sealed fate.

That is how Trinity would have felt after the hammering they received in the Bradby first leg, followed by a walloping from St Peter’s. They had copped 66 points in two weeks and were on track for a triple 30+ hiding at “Jurassic Park” by Royal. 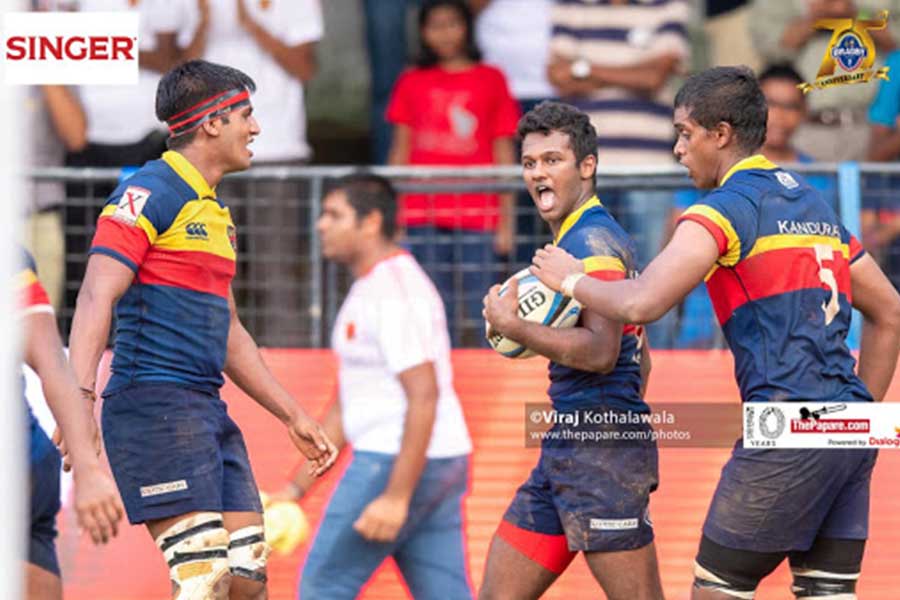 Well, that was supposed to be the script. But as Leo Di Caprio did in The Revenant, the man who came back from the dead, Trinity– hauled themselves up to the mountain, pushing them almost and over the brink. Almost.

It was an incredible performance with possible, generational consequences. A belief, that a team which was written off could play with such inspiration, to do the improbable and almost achieve the unthinkable.

Trinity was back from the dead and walked out from their ICU, feeding tubes and all, dangling off their nostrils, dressed in a blood splattered hospital gown. They made it almost to the podium, only to be denied– as they were about to climb the final step. It was a desperate slip as they barely found a handrail to cling onto but in a frenzied hurry, it all sank in the cruelest fashion.

There lay The Revenant, as their supporters rushed in with jubilation, carrying them on their shoulders as Trinity sat up with a fist pump. Their adversary in Royal, victors of the Bradby on aggregate, clapped more in relief but deep down there was admiration, knowing they were well beaten by an opponent who was pummeled to within an inch of his life, but…stood up, wiped the blood off his brow and came back swinging. It was like the warrior who rose from a Golgotha. What an epic.

A riveting spectacle and one which we were all privileged to witness. You couldn’t write it in the stars. 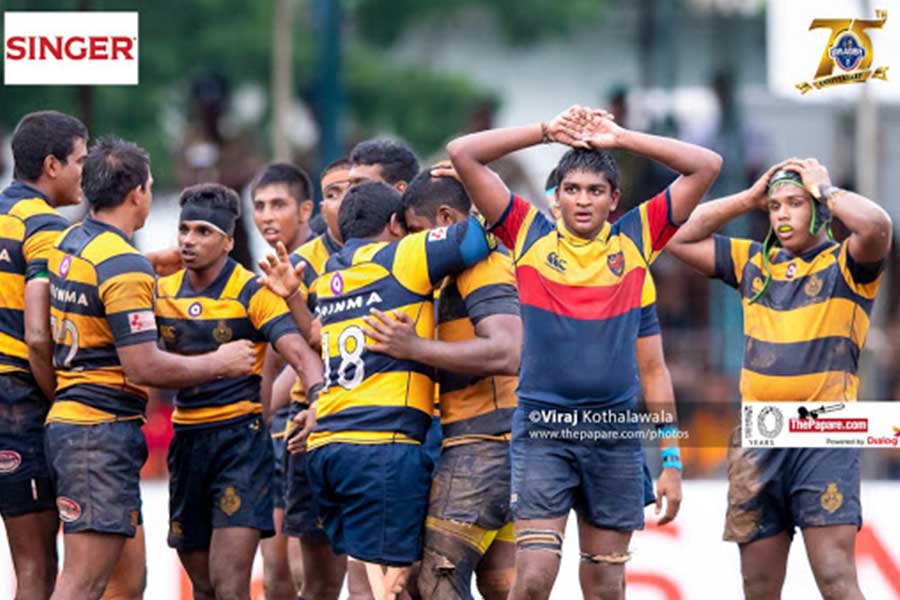 On that adrenaline-fueled rush, let’s look at five key findings after the most spellbinding Bradby shield for a long while. The 75th edition is now done and dusted.

Since coining the term “Jurassic Park” for the Royal Sports complex from about a year ago (last year’s Bradby), it had only aided and abetted to the mythical status of this venue. That of, how dominant and intimidating, Royal have been on their home turf.

That was until this Saturday gone by. Trinity in their almost blaze of glory, shattered this glass barrier like a crash test dummy on myth busters. It was a courageous strike fueled by a belief that their season was at crossroads. On the back of a massive pre-season (spending spree) trip to Wellington and serial changes in their set up, Trinity needed a result. They got it and almost filled their cup.

Beating Royal at the complex after 5 very long years, seemingly like 5 decades, their faithful had something to cheer about. Royal was 12-6 in all shield encounters coming into this and now, they were 12-7.

It was an almost fantasy-like end to what would have been a Bradby fairytale.

Games such as these create and churn out heroes from the most likely and pivotal positions. In what was a captain Buck Rogers-like performance, Trinity skipper Reshan Bandaranayake stepped up to the plate.

It was courage under fire. A masterclass of will, which in turn brought out some skill.

Initially, after butchering a kick receive and fumbling to a knock on, he put that set back and the many catcalls behind him. Every time he was on the bottom end of another high ball, he started to commandeer Trinity back into the game.

The background noise, a sign of the times and new age “Royal” supporters, were soon, thinning away as he emerged with terrific counter strikes in a game where both teams traded in beautiful carnage. A man of the match performance.

It seemed to me, just like Captain Buck did in the 25th century, he too was playing for his team and their lifeline. He, along with his merry men, almost, manufactured a victory from their prototype of a defeat.

3. Indominos Tyrannosaurus Rex versus the Raptor

Coming into this game, the hosts and home town juggernaut were the only obvious bet for a victory. Their record and form line at “Jurassic Park” was truly savage. 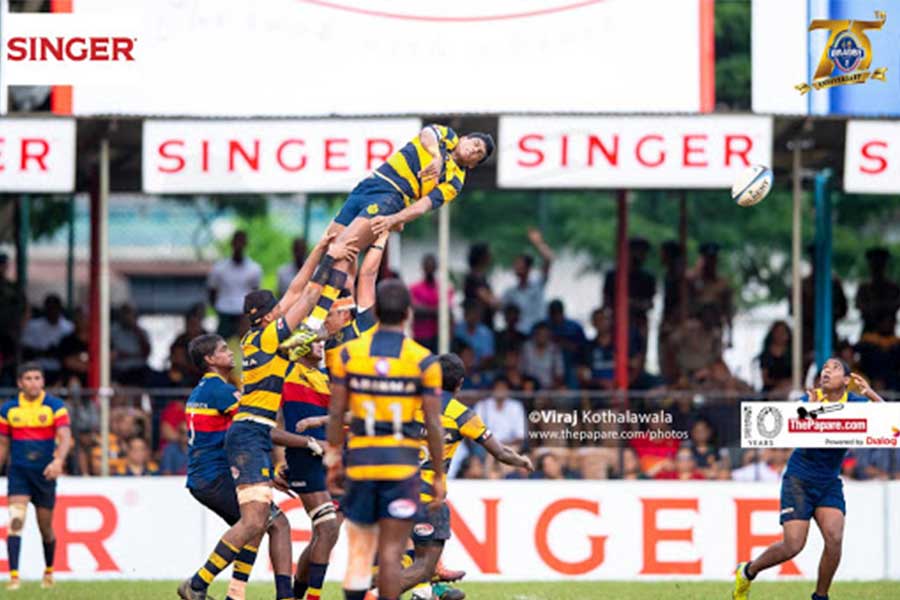 Most visiting teams know what’s coming but there is very little they can do. You become a sitting duck or lunchtime snack for this Indominous T-Rex, a hybrid dinosaur who is at the top of the food chain. Just like from the movie.

Royal look to intimidate and bully their opponents and overrun them into submission. In a complete reversal of form, Trinity and their Raptor-like attitude– took it to the big boy and cut him down to size.

Fleet-footed nature and with unceasing determination to carry, props Nimesh Ekanayake and Maadi Abdullah played an absolute blinder. Smashing into their opponents like ocean waves onto boulders. It was a hair-raising finale.

Seventy minutes of cat and mouse came to an iconic finish. Trinity won but lost out on the shield. The Raptor almost cooked the T-Rex’s goose. Almost.

4.The audition for RHOC

So, here’s the part most of you have been waiting for. The glamour and off-field talent. The Kandy leg turned it on with some style and threw down the challenge for Colombo.

In what was a most emphatic response and a newmarket-handicap like effort, the Colombo glamour blew the upcountry out of the water. It was a technical knockout. In the words of an enthusiastic viewer, “it was a no contest”.

No single play obviously made it on a day where patterns of play and hard graft stood out like a stallion on the loose. Trinity’s two big front rowers with telling carries which led to a beautiful try were all part of a well-constructed sequence.

Naming rights sponsors SINGER who made a wonderful decision to sign up ThePapare.com as their official and exclusive broadcasting partner. It has been an incredible ride and what a start to what would be a long relationship to come. The broadcast quality and passion in which it was delivered, did the Bradby and their sponsors absolute justice. 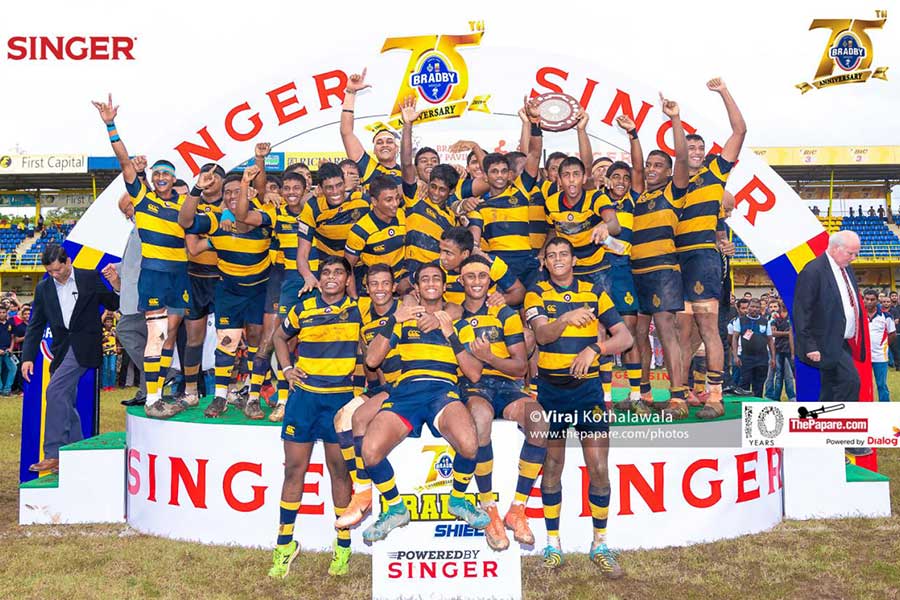 A photo finish which went down to the wire where the underdogs who would have otherwise rolled over and played dead, woke up from their slumber. It was all about attitude and unlike the altitude, they used to prep for last year’s Bradby. They had found their mojo and played like true Lions.

In the very words of The Revenant, Hugh Glass, the fictitious character played by Di Caprio– “As long as you can still grab a breath, you fight”. That is exactly what they did with actions which spoke louder than words. Trinity had finally, earned their respect. Deep down inside, despite winning the shield, Royal had given them their dues. The final handshakes and hugs were evidence enough.