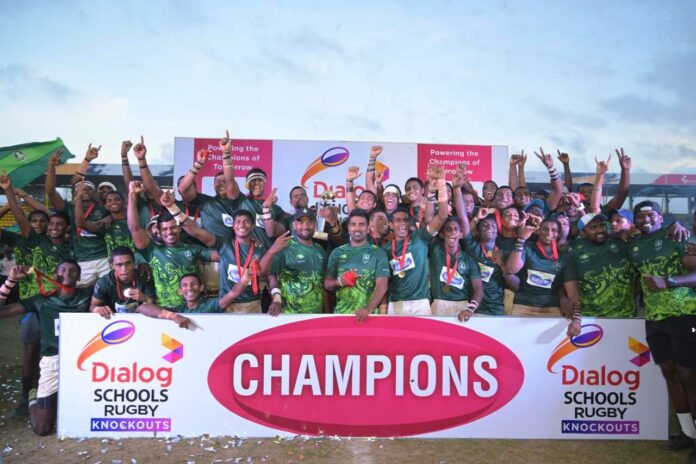 Isipathana the only unbeaten team this season, came in as favourites to this final and they lived up to that tag as they dominated the early exchanges as Malith Mihisara added a penalty to start the scoring for the green machine.

League champions scored again after the restart when winger Rinesh Silva broke the Joe’s defence into pieces and the move was later finished off by skipper Dahan Nithina. (IC 10 – 00 SJC)

Pathana lost their second-rower Soorya Dodangoda for a high tackle and that didn’t stop the green machines as their playmaker Naveen Kanishka touched down for the second try. (IC 17 – 00 SJC)

The dominance of Isipathana continued as Malith Mihisara slotted over another three pointer to increase the lead and the first half came to a close with another try from the green machine as Rinesh Silva yet again was unstoppable as he created some space for his playmaker Naveen Kanishka and he managed to send his hooker Venura Kodagoda over the whitewash, Malith Mihisara continued his good form as converted his third kick.

Isipathana went to sleep in the 10 minutes of the second half as Joes made a comeback. Dilhara Subash collected an overthrown lineout and gained some valuable yards towards the try line, few plays later the big man Naveen Marasinghe blasted through the Pathana defence to open the scoring.

A few minutes later Isipathana was down to fourteen when Soorya Dodangoda was sent to the bin for a late charge. Joes took the advantage of the numbers as Dilhara Subash opened up a gap as he went through the defence and sent his flanker Sachinthana Vidyana over to cut the deficit.

Joes was in full swing as they continued their uprise as the big man Naveen Marasinghe score his brace by bulldozing past three Pathana defenders from the 45-meter line.

Joes lost momentum after handing over possession to Isipathana from a line out as the green machine took the maximum few phases later as the winger Praveen Stephan stepped his way past a few Joes defenders to increase the lead.

St. Joseph’s lost their playmaker Dilhara Subash as he was sent to the bin for a late high shot but Ruchitha Rodrigo added a penalty to bring down the deficit to 10 points but the floodgates opened up when Rodrigo was sent to the naughty chair for a high tackle. (IC 32-22 SJC)

Pathana commended their onslaught as scrum-half Sehandu De Costa moved the ball quickly to the line as Soorya Dodangoda sent his winger Praveen Stephan over. A few minutes later Sehandu De Costa managed to sneak past the Joes defence to score in the left corner.

The Icing on the cake for the unbeaten double champs Isipathana came when their main weapon Tharindu Wewalapanditha powered over for the final try as Isipathana clinch the knockout after 2016.