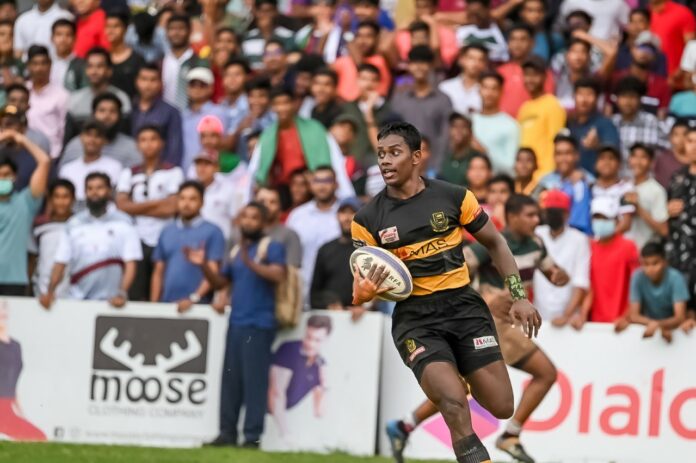 Both teams made their way into the encounter following a sublime league-winning showing. The physically challenging Dons outfit visibly overpowered the lads from Colombo 10, leaving no room for slip-ups.

It took the Dons just 9 minutes to get off the mark, a penalty curtesy the boot of Rajaratna – this penalty opened up the flood-gates.

Side-to-side Rugby continued through the first quarter as the both teams defenses managed to stay put. Eighth-man Peiris broke through the resistance to score the first try of the game as DS upped their game two decibels.

Prop Wijesinghe scored with half time on the horizon, putting a cushion between the two sides. Rajaratna failed with the extras on both occasions, as the Dons moved into double figures. (DS 13-00 Zahira)

Winger Udawatta put the game to bed before lemons with what was undoubtedly the moment of the match, set up by Skipper Seneviratne. This try left Zahira with a mountain to climb after the break. Rajaratne found his feet after the two earlier misses, making no mistake from underneath the post.

The second half continued on the same footing, as Zahira College failed to show up at the Park, yielding 2 further unanswered tries, this time by Seneviratne and lock forward Balasooriya.

Both tries came off good-flowing, fast-moving Rugby, putting the result in favor of the Dons, without a doubt. Rajaratna’s luck turned on its head as he continued to nail the kicks off the tee. (DS 34-00 Zahira)

The boys from Colombo 10 continued to fight, finally getting their first points on the board, a penalty, courtesy Kitchil’s left foot. (DS 34-03 Zahira)

Zahira’s Shaif scored after the hooter – however, it was just a consolation score, moments after Wijesinghe scored his second of the evening. Rajaratna converted as Zahira were put out of their misery by referee Hasantha Weeranga.