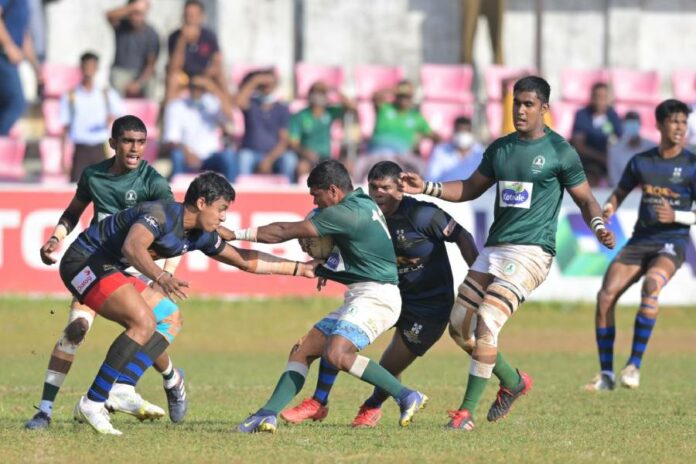 Both teams entered the fray on the back of momentous victories as the Presidents Trophy was just a game away. The Thomians made minor tweaks to their forward pack as Isipathana were in full strength vying for more silverware.

It was the Black and Blue who scored the first points of the day off the boot of Yehan Bulathsinghalage as he pierced the posts after an early exchange of unfruitful play by both sides. (IC 00-03 STC)

Chamidu Chirath burst through the Thomian defense moments later to score the opener as the Pathana lads found their feet. A penalty off the boot of Rinesh Silva followed the failed conversion by Malith Botheju as the Green Machine heated up to its task. (IC 08-03 STC)

Rinesh Silva added to his points tally as Bulathsinghalage scored his second off the evening, either side of the Silva and Soorya Dodangoda try, putting a comfortable cushion between the two sides at the lemons.

Both tries were converted by Botheju as he has a field day of the boot and with ball in hand.

With a comfortable lead on the scoreboard, the Pathana lads brought about their razzle-dazzle to score minutes into the second stanza. Bulathsinghalage saw yellow prior to the try from Praveen Jayakanth as the visiting lads from Mount Lavinia as they lost their head with frustration creeping in.

Botheju continued on his merry way from tee, leaving putting the game to bed with more than 20-minutes left in the game. (IC 29-06 STC)

Hakeem marched into the game, making an instant impact off the bench both in attack and defense. Akira Perera failed to make an impact due to the lack of front foot possession, however, the winger soon made immense, breaking the line to see Hakeen dive over after a few phases.

Bulathsinghalage kept his 100% record off the in-tact, however, his inability impact the game amidst pressure from the Green Machine, meant the Thomians ended their XV’s season with a defeat to the Unbeaten league champions.

With the win, Isipathana booked their place in the Final of the Presidents Trophy Knockouts as they seek to do the double after 2014.