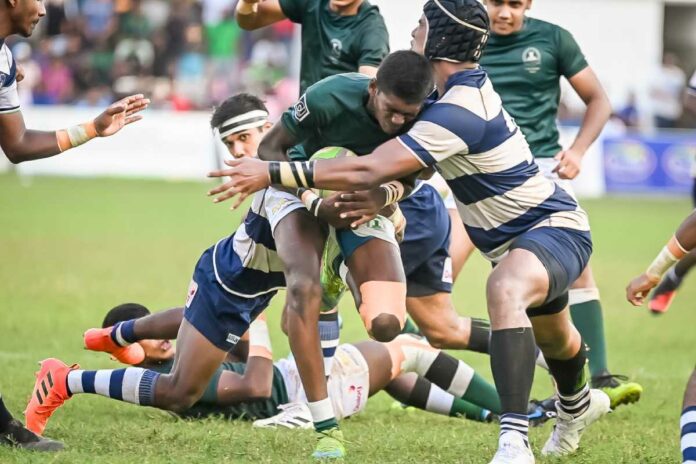 Isipathana College defeated St. Joseph’s College 16 (1T 1C 3P) – 13 (1T 1C 2P) at Havelock part to set up a final day showdown with Royal College to battle it out for the rights to the Dialog Schools Rugby League title for 2022.

The home team headed in as favorites while the Josephians boosted their team sheet with the returning Teran Karunanayake for this all important clash.

On a sunny evening at Havelock Park, hosts Isipathana kicked off proceedings as a sumptuous 70-minutes of rugby awaited.

Isipathana Lock Hettiarachchi scored first, breaking off a maul to touch down. Botheju added the extras as the hosts tipped the game in their favor. (IC 7:0 SJC)

The Josephians lost Five-eighth Dilhara Subash and Fullback Isuru Isuru Kanchana in friendly fire in the motion of a tackle as the visitors’ injury woes continued.

Josephian replacement Five-eight Chamodh Wimalasiri saw yellow as the first half came to an end.

With the Josephian defense holding out the hosts in the first half, Isipathana brought about their running game in search of answers to unlock the visitors’ defense.

Both sides traded penalties, Pathana with three and the Josephians with two as Silva and Ruchitha Rodrigo, both were lethal off the boot, leading their respective team. (IC 16: 06 SJC)

Action heated up as Pathana Prop Dinusara saw yellow, leaving the Josephians with an opportunity to grab back momentum.

Naveen Marasinghe extended his lead at the top of the highest try scorer list with a try to make the final few minutes exciting! The big Josephian No.08 barged his way through from close range to cut the deficit to 3-points after the successful conversion from Rodrigo. ( IC 16:13 SJC)

Pathana hung on in the final exchanges as they secured a hard-fought win against the Josephians to set up a final showdown against Royal College in the final week of the Dialog Schools’ Rugby League.