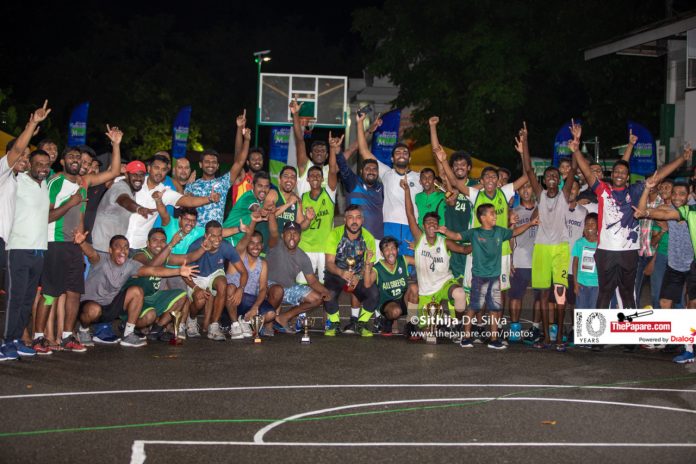 The Isipathana College 3×3 Basketball Championship 2019 was conducted with a total number of 20 teams. The teams were drawn into four groups and played in a round-robin basis.

The team at the top slot of each group was promoted into the Cup Championship while the rest of the contenders competed in the Plate and Bowl championships respectively.

The knockout stage tipped-off with the quarter-finals of the respective categories. Apart from the main event, the organizers had taken measures to organize a 03-pointer contest and half-court shooting contest.

The bowl finals were the first to shoot off, with team Oryx and Ali Boys in an interesting face off. Ali Boys came out as victors in that match giving them the position of Bowl Champions.

Team Falcons and Team Tesseract went head to head in a heated battle for the Plate title. Both teams comprised of very similar age group players. The match went on to extra time and the Falcons emerged on top as the final scores read, 7-6.

With the end of an exciting the Plate final, the crowd was pumped for a nail-biting Cup final. The two teams comprised of the following individuals:

Old is Gold opened the scoring with Ranga getting a pass under the basket. Fawshan controlled the pace of the game and coordinated the offense for the warriors. Both teams were 2-2 at the 5-minute mark.

The slightly wet conditions made driving the ball and handling it very difficult and saw the two teams opting for different strategies.

At the end of regulation time the teams were tied at 5-5. During over-time, a fumble by Amar saw the ball being taken out of bounds, and Sujeewa dished out a shot from the perimeter which sealed the game 7-5 at full time.

The Return of the 3×3 Basketball Bonanza!