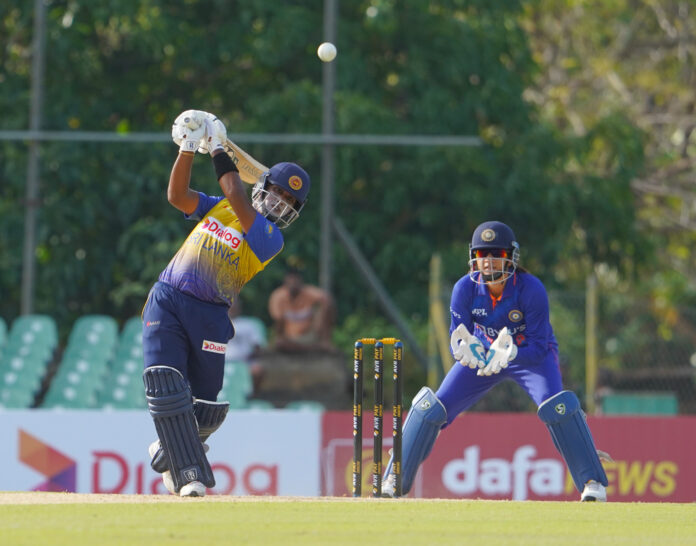 Chamari Athapaththu was at her prodigious best in the 3rd and final T20I against India at the Rangiri Dambulla International Cricket Stadium as Sri Lanka registered their 1st ever T20I win against India at home.

Chasing 139, the same target set for the hosts in the 1st T20I, Sri Lanka’s intentions were made clear early on by 16-year-old Vishmi Gunaratne as she drop kicked one through the midwicket boundary in the 1st over. Unfortunately, the youngster didn’t stay much longer, dismissed in the same over by Renuka Thakur.

Sri Lanka never got bogged down despite the loss of Gunaratne and Harshitha Samarawickrama soon after as Nilakshi de Silva joined Athapaththu for a record 3rd wicket partnership of 77, which turned out to be the catalyst in the game. De Silva made 30 and by the time she was dismissed, Sri Lanka were more of less home thanks to a belligerent 80* by the skipper.

Earlier in the day, the hosts did well to restrict India to 138 after Harmanpreet Kaur won the toss and opted to bat first.

Shafali Verma, Smriti Mandhana and Sabbhineni Meghana were dismissed within the 1st 10 overs and India were in a spot of bother at 52/3, but a fluent and busy partnership between Kaur and the impressive Jemimah Rodrigues saw them post 138 – what they would have thought was a very competitive total.

The ODI leg of the tour will commence on the 1st of July at the Pallekelle International Cricket Grounds.