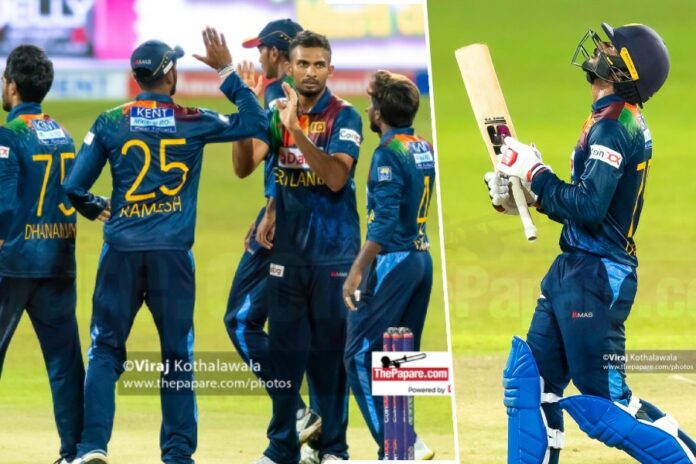 Chasing 133 runs to win, Sri Lanka were in a spot of bother at 105 for 6 in the 18th over. However, Dhananjaya De Silva, who took only 34 balls for his 40*, was ably supported by Chamika Karunaratne, who made 12 off 6 as they took the hosts over the line with 2 balls.

The three-match T20I series is levelled at 1-1 with the series decider to be played on Friday (29th July) at the same venue.

Earlier during the chase, Sri Lanka lost wickets at regular intervals. Avishka Fernando was the first to be dismissed courtesy of a smart catch by Rahul Chahar near the deep square-leg boundary line. Sadeera Samarawickrama played an all or nothing of a shot against Varun Chakravarthy and was clean bowled for 8. Skipper Dasun Shanaka, promoted at number four, danced down the track to Kuldeep Yadav and was stumped for 3.

Minod Bhanuka made a handy 31-ball 36 at the top of the order but failed to clear the rope while attempting a slog-sweep off Kuldeep Yadav. After being 66 for 4, De Silva was joined by Wanindu Hasaranga as the Indian spinners were tightening the screws on the run-scoring. In the last 6 overs, Sri Lanka needed 46 to level the series. Hasaranga and de Silva added 28 runs standoff 20 balls to ensure Sri Lanka were back on track.

Hasaranga departed for 15 in the last ball of Chahar’s spell and Ramesh Mendis lasted only 5 balls before becoming Chetan Sakariya’s first T20I wicket. Karunaratne’s gigantic six off Bhuvneshwar Kumar’s last over, the penultimate over swung the game in favour of the hosts.

After being asked to bat first on a slow surface, India got off to a sensible yet cautious start. Debutant Ruturaj Gaikwad made 21 off 18 before he was undone by Dasun Shanaka’s bouncer. Shikhar Dhawan top-scored for the visitors with a 40-ball 42 including 5 fours.

However, the Indian skipper attempted a cross-batted stroke and was castled by Akila Dananjaya. Sanju Samson lasted 13 balls but made only 7 as Dananjaya bamboozled him. While Devdutt Padikkal looked good during his 23-ball 29, he was bowled trying to sweep Wanindu Hasaranga.

India were 94 for 2 in 15 overs but managed only 38 runs in the last 5 overs. Padikkal’s wicket meant Sri Lanka were able to tighten the noose even further. Nitish Rana fell for 9 off 12. Bhuvneshwar Kumar made 13 off 11 to ensure the bowlers had something to work with. India was able to manage just 8 boundaries in the innings – the lowest they’ve managed in a T20I after batting all 20 overs.

The visitors had to make wholesale changes to their team after eight players were deemed close contacts of Krunal Pandya and had to be isolated in the Team Hotel. Pandya was tested positive for Covid-19 yesterday. Therefore, they had to play all the remaining 11 players in the squad. With 4 debutants in the lineup, India was probably two batsmen short in their playing XI.