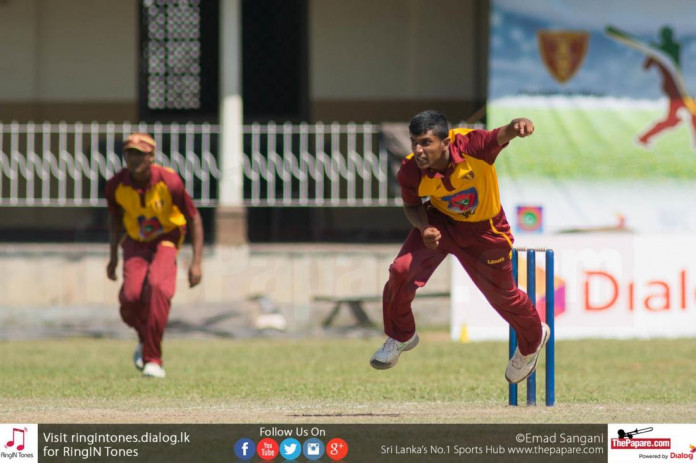 Both teams had quite a good squad and were looking forward to the game. Zahira won the toss and chose to bat first.  Zahira had a great advantage since it was their home ground and the support given by the spectators was tremendous. The maroons were geared and wanted a win which would give them more confidence for the upcoming big match.

The two flamboyant openers of the home side were sent back to the pavilion without much runs on the board, as the batting team didn’t look too good at the crease. The other top order batsmen arriving in to the middle too were sent to the dugout in quick succession. Kavishka Anjula had great bowling figures reading 2/2 in his second over of the innings. The only batsman to perform was Ramzan Rafaideen, scoring 20 runs in 56 balls. Alongside Anjula the other bowlers Ashen Damsika, Supun Wangoda and Thirina Jayalath each took two wickets to restrict the batting team. At the end of 32.2 overs Zahira were all out for 75.

In the beginning of the second innings, it was all smiles in the Ananda dressing room since they had a small target to chase. The opening batsmen did a good job giving a decent start to the maroons. At the end of 5 overs Ananda were 30-1. The captain Nisal Fransico played an excellent knock of 40 runs to bring his team closer to victory. Other top order batsmen such as Sahan Suraweera and Kamesh Nirmal helped build partnerships to bring their team closer to the target. The bowling of the home team looked quite good, however they didn’t have enough runs on the board to attack. Mohamed Najath and Sajith Sameera both took one wicket each to put some pressure on the opponents. The Ananda batsmen were running very well between wickets which kept the scoreboard ticking and released the pressure. A good day of cricket for the TB Jayah trophy concluded at the Zahira College grounds with Ananda College pulling off an easy win.