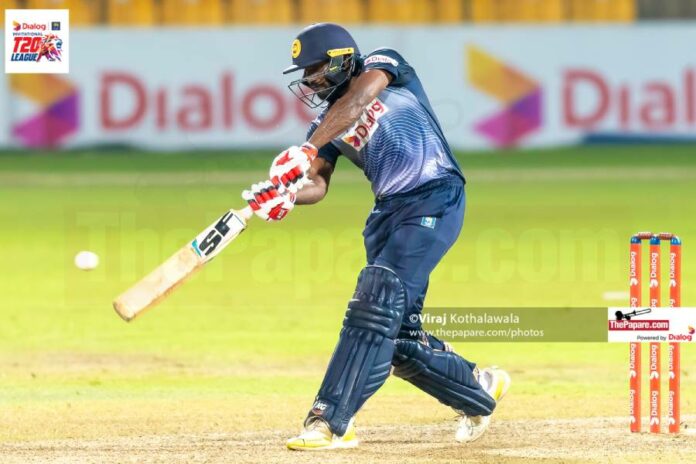 The SLC Greys pulled off a thrilling victory against SLC Blues in the 6th match of the Dialog-SLC Invitational T20 League 2021.

The Greys, who decided to take first lease of the crease, got only 3 boundaries during the Powerplay. They were down and under after the 1st 10 overs with only 54 runs on the board, having lost 4 wickets including the man in-form, Dasun Shanaka.

At the centre was Charith Asalanka, who had just come into the tournament after his break, and Lahiru Madushanka, a not-so-popular Sri Lanka cap who played 4 ODIs and 2 T20Is for Sri Lanka since 2017.

In the stands were the Sri Lankan Head Coach, Mickey Arthur, and member of the selection panel, Romesh Kaluwitharana.

These two up and coming Cricketers had a golden opportunity to show everyone what they were capable of, and they did that in style.

For the next 10 overs, the pair scored a whopping 111 runs. Asalanka played a rather composed inning while taking on even the slightest of an edge he got over the bowlers. He made a classy 54 off 47 balls.

Madushanka, on the other hand, was a complete package. He kept everyone on the edge of their seats as his 39-ball showdown saw 5 massive sixes and 5 fours. He scored an entertaining 74 runs not-out to catapult Team Grey to a strong score of 167 runs.

The Blues seemed to have lost their plot quite early in their chase when they stumbled down to 96 for 5 in the 15th over. All their experienced guns were back in the hut by then without making any impression, except for Sadeera Samarawickrama.

Sadeera kept his fine form going as he looked much more positive than what he was during the India series. The confidence from his last innings was visible in the way he managed to clear the ropes over extra-cover with ease, playing a couple of beautiful inside-outs.

The Blues needed 68 runs off the last 5 overs and young Ashen Bandara, who seemed to have silenced many of his critics already, was given the task. The right-hander gave a spirited fight in trying to carry his team to victory. He scored 29 off just 15 balls, but hailed one straight to deep mid-wicket while trying to take on Dasun Shanaka in the penultimate over.

Seniors Shanaka and Pradeep were the pick of the bowling for Team Grey. Both of them picked up 2 wickets each while managing to keep their economy rates below 6.

With this win, Team Grey take the box-seat in the points table.