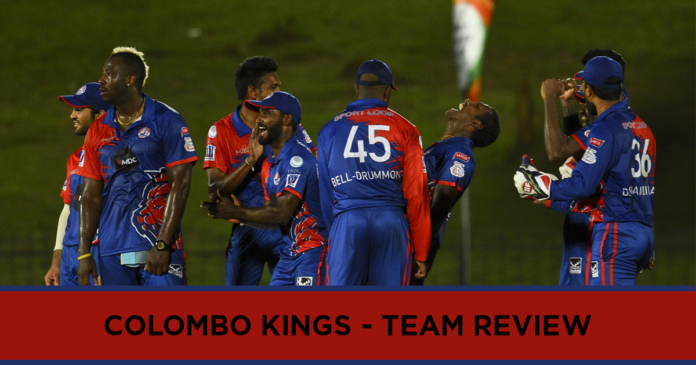 The Colombo Kings quite literally ruled the league stage of the Lanka Premier League, easily topping the leaderboard, but had an ‘off-day’ at perhaps the worst possible time, the semi-finals.

Arguably the best team on paper coming into the LPL, the Colombo Kings had a comfortable journey to the semi-finals, losing just 2 of their 8 league games. One of those 2 losses came against the Galle Gladiators and ultimately proved to be the catalyst in the Gladiators’ campaign. They did seem like the only team to have the better of eventual winners Jaffna Stallions, beating them twice reasonably comfortably in the league phase. A loss in their last game, may have arguably given them a chance at the Stallions once again in the semis, but it wasn’t to be.

Their campaign started off shakily as they conceded 219 in the tournament opener to Kandy Tuskers. But a flashy 80 off 46 deliveries by Dinesh Chandimal and a blitzkrieg at the end of the innings by Isuru Udana help them scrape through to a tie and a win in the Super Over. They followed that narrow win with an absolute thrashing of the Gladiators in their rain-curtailed 2nd game, where Andre Russell showed the LPL what a real T20 superstar looked like with 65 off just 19 deliveries. A 34-run win in a 5 over affair, massive!

It was the batting that really clicked for the Kings over the next 6 games, with the two losses being the only blemishes to their record. A win in the final league game against the Dambulla Viiking sent them into top position on the table, setting up a semi-final against the Gladiators.

Unfortunately for the Kings, come semi-final day, it did not matter how well they had played in the league as they crashed to their lowest first innings total of the tournament (barring the 96 off 5 overs in the rain-shortened game vs GG). 150 was always going to be tough and it was made toucher as players pulled up with injuries left right and center. In our estimation they dropped at least 7 catches during the tournament, perhaps the most crucial one in the final over of the semi-final when Dhananjaya Lakshan was put down by Ahamed. So injury hit were the Kings that Mathews admitted they may have struggled to put together 11 players if they had made it to the final.

Dinesh Chandimal started the tournament with a bang and by doing so, threw his hat into the mix of openers vying for the position in national colours. He made two quick-fire fifties in winning causes and held his own with the keeping gloves as well.

Ashan Priyanjan was a bit of a surprise package with the ball while adding some important knocks in the middle order for the Kings. Dushmantha Chameera was able to generate some pace, to the joy of all Sri Lankan fans and played a key role with the ball. Daniel Bell-Drummond was another who had a decent tournament, saving his best knock for the semi-final where he made 70 of Colombo’s 150.

The two seasoned local campaigners Angelo Mathews and Isuru Udana’s performances were below par by their own standards, as neither could fins any sort of consistency. Udana was terrific with the bat in the first game but would’ve wanted to have a greater impact on the side’s fortunes. Mathews disappointing season was made worse by the fact that he ended up picking up a hamstring injury which will keep him out of the Tour of South Africa.

As it was in most of the other franchises, Colombo too were hit with player withdrawals prior to the beginning of the tournament. Among those who pulled out were Manvinder Bisla, Faf du Plessis and Mohammed Hafeez. Canadian batsman Ravinderpal Singh was ruled out due to testing positive for COVID 19. Having these three options would perhaps have allowed Colombo to rotate their line-up in the league stage as both Laurie Evans and Andre Russell finished the tournament with injuries having played nearly all the league games.

The Head Coach position too exchanged hands numerous times, with Dav Whatmore pulling out, his replacement Kabir Ali then being unable to attend due to a positive COVID test and his replacement Herschelle Gibbs also leaving due to family commitments.

A look at the Colombo Kings squad would tell you they had a strong spin bowling contingent. Qais Ahamed made it impossible for Jeffery Vandersay to break into the team – the latter played one game and bowled one over in the whole tournament. Amila Aponsu (3 games, 1 over) and Tharindu Kaushal (5 games, 11 overs) were also unable to find a permanent spot in the playing XI, with Priyanjan stepping up to the role of backup spinner.

Evans finished as the top-run scorer for the Kings with 289 runs. He also managed to hold onto the distinction of being the only man to score a century at LPL 2020. The right-handed Englishman was looking in dangerous touch when he was forced to retire hurt due to what appeared to be an abdominal strain in the last league game of the tournament and unfortunately had to sit out the semi-final.

An Andre Russell who is fit to bowl, is a man everybody wants in their team. A sight to behold when in full flow, he produced a couple of match-winning performances in the league phase. Deceptively quick, he was used sparingly by the skipper Mathews but when he did bowl, he picked up crucial wickets. His inability to bowl in the semi-final may have cost the Kings the game.

The leggie from Afghanistan was the lynchpin in the Kings bowling attack and his ability to pick up wickets in the middle overs helped them choke many an opposition. He was within touching distance of the top of the wicket-takers table but perhaps his most exciting performance came with the bat when he brought Colombo back from the dead in the final league game against the Dambulla Viiking with an unbeaten 50 off 22 deliveries.

Ultimately the Kings will rue the fact that they had saved one of their worst batting performances for the semis. With the tournament structure as it was in this edition, it didn’t matter that they won 6 games in the league phase once the 4 teams moved to the semi-finals and they would certainly have benefited from a play-off system such as the one used in the IPL.