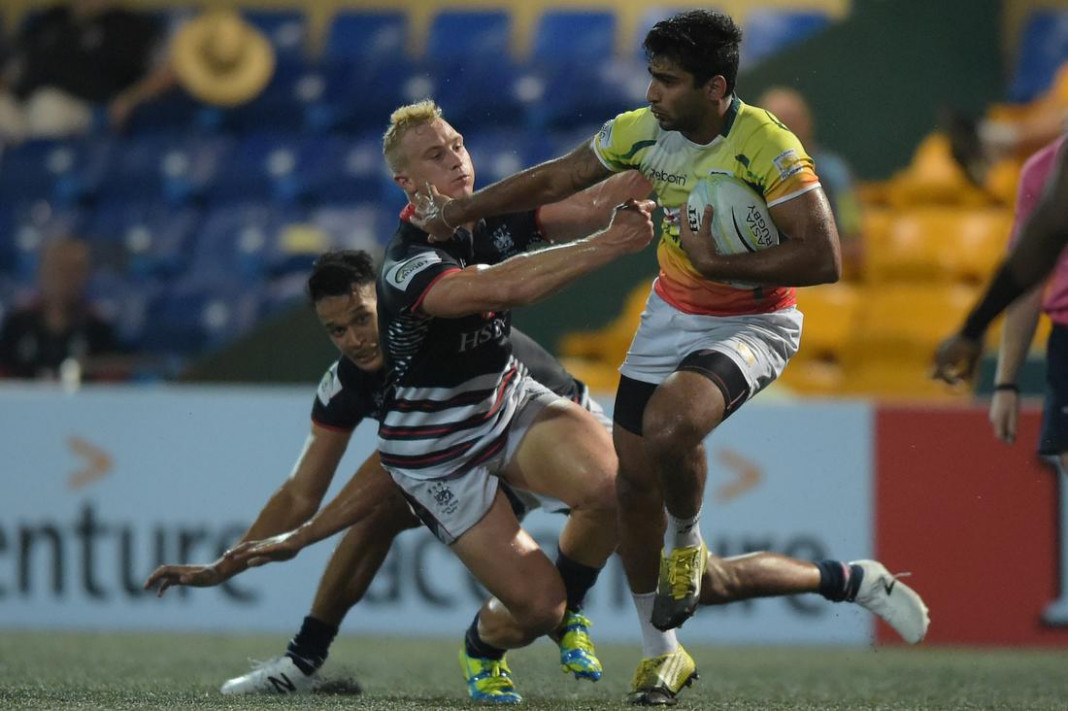 After a pulsating semifinal against China where Sri Lanka pulled off a last minute win, the “tuskers” took on Asian heavy weights for the cup, Hong Kong. The hosts had already beaten Sri Lanka in day one quite convincingly but the islanders proved no pushovers as the hosts had to battle to the last minute to clinch victory.

Sri Lanka got off to a flying start when Dulaj Perera broke through the center field but was brought down only a few meters from the try line. Skipper Dhanushka Ranjan  who came in support  collected the ball off the ensuing ruck and managed to power his way forward and ground the ball on the try line despite the best efforts of two Hong Kong defenders. Dulaj Perera made a stunning conversion to give an early 7nil lead for the underdogs. (SL 07- HK 00. )

Despite the early set back the hosts never panicked and they started to find their rhythm immediately. Taking advantage of their far superior physical strength, the hosts started to gain territory through structured phase play. Sri Lanka tried their best and were successful to an extent but the pressure eventually paid off  for the home side as they scored in the 5th minute through James Cunningham who fell over, mid right. The conversion was missed and Sri lanka led by a mere 2 points. (SL 07 – HK 05).

The hosts came back barging their way through once again and the “tuskers” just couldn’t handle the onslaught conceding territory. Christopher Maize then finished off the 1st half with a try, brushing aside a few defenders to score mid right. Scrum half Ben Rimene converted to give Hong Kong a five point lead at the break.

The half time break probably came at a good time for the Lankans as it gave them a brief respite from the surging wave of attacks the hosts put up. Looking determined to take back the initiative the “tuskers” managed to turn over possession off their own kick off .

The ball was sent out wide and a neat inside switch pass to Jason Dissanayake gave him the enough space for him to fend off the defender and run along the touchline to score near the corner flag.

Barley a minute later off the ensuing restart, the “tuskers” managed to turn over possession yet again and once again the ball was sent out wide to Danushka Ranjan who was lurking on the wing.

Not requiring any invitation, Ranjan showed off his speed and power to breeze past the oncoming defenders and touch down at the corner flag. Both conversions by Perera were not successful but the Lankans were now in the ascendancy. (SL17 – HK 12)

Hong Kong however showed their experience and made a few changes. Not panicking, the hosts once again opted to play the game through organization and structure in contrast to their opponents who had the flair.

Hong Kong kept coming at the Sri Lankans who couldn’t match up to the physical battle in the tackle and breakdowns. Veteran Lee Jones powered his way through from close range and Rimene converted as Hong Kong regained the lead in the 12th minute (SL 17- HK 19).

In the dying moments of the game the hosts were awarded a penalty which Ben Rimene put over with ease as his side gained maximum points from the 1st leg.
Full time 22-17 to Hong Kong

Sri Lanka new 7s captain, Dhanushka Ranjan proved to be source of inspiration scoring a try and setting up the winner late inside injury time and book a place in the cup finals of the 1st leg as Sri lanka beat China 19-17 in their cup semifinal in the Asian Rugby 7s Series which got under way in Hong Kong.

The game didn’t get off to the brightest start the for Sri lanka as china drew first blood in the 2nd minute through an unconverted try which was also helped by some poor defense. However a couple of minutes later Debutant for the senior side Kevin Dixon made spectacular  cross field run covering 60 meters to touch down under the posts. Dulaj Perera added the extras. (SL 07- 05 CHN). The momentum seemed to be with Sri Lanka but against the run of play it was china who scored again when through their prop Bing Gao just before the break. (SL 07- CHN 10)

It took less than a minute for Sri Lanka to hit back when Danushka Ranjan made a powerful run down the left flank finishing it off with a try near the far corner. Perera made a stunning conversion to hand the advantage back to Sri Lanka. (SL 14 – 10 CHN) with almost 6 minutes of play left both teams try to get a grip on the game but fumbled with their opportunities. Sri Lanka were dealt a blow when china’s Zheyn Hu scored under the posts in the 12th minute. The try was converted and china led 17-14. With less than a minute remaining, the “tuskers” who gained possession worked the ball across to the sides of pitch try to find a way through the opposition defense. The ball was sent across to the mercurial Ranjan who made a short burst, drew the defense and passed it substitute Hirantha Perera who was in support who dived over for unchallenged in the far corner to clinch the game and seal a finals birth.