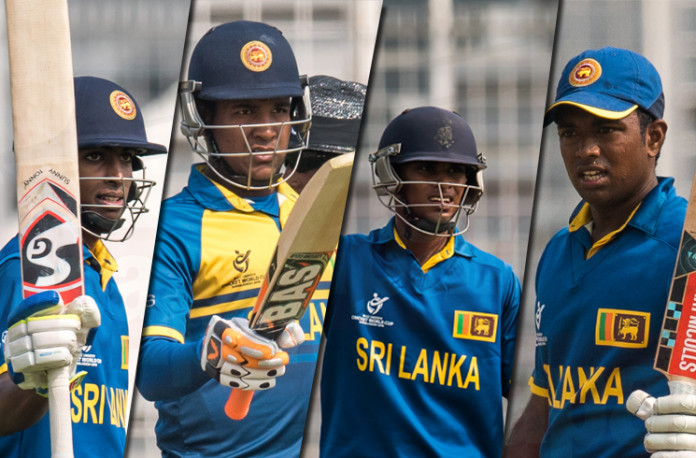 Four excellent half-centuries and a disciplined bowling effort helped the Sri Lanka under 19s make a successful start to their ICC Under 19 Cricket World Cup 2016 campaign as they beat the Canada under 19s by 196 runs in their group B match which was worked off at Sylhet District Stadium on Thursday.

Charith Asalanka elected to bat first after winning the toss. Left-hander Kavin Bandara started proceedings off with two fours in the very first-over. His opening stand with Avishka Fernando, worth 44 runs, ended in the 10th over when the latter was given out LBW off Abdul Hasseb’s bowling. One-drop batsman Kamindu Mendis failed to make a contribution as he was clean bowled in the same over for no score.

Asalanka and Bandara constructed a resolute stand of 109 for the 3rd wicket which laid a solid platform for the Young Lions’ middle order. Skipper Asalanka made runs all around the ground to notch up 76 runs, which included 9 fours, before he was dismissed by Miraj Patel. After afew overs, Bandara perished when he was involved in an ugly run-out in the 32nd over. The DS Senanayake skipper made an 84-ball 64 with 4 fours.

Anandian Sammu Ashan and Isipathanian wicket-keeper batsman Vishad Randika stepped on the accelerator with a partnership of 92 in 87 balls for the 5th wicket. In-form vice-captain Sammu notched up yet another half-century and remained unbeaten on 74 off 61 deliveries with 3 fours and 3 sixes while Randika made 51 in 47 balls.

Richmondite Wanindu Hasaranga powered his way to a 13-ball 28 as Sri Lanka made 50 off the last 3 overs to post a commanding 315 on the board. Apart from the top three, the batsmen maintained a strike rate of above 100.

Chasing 316 runs to win, Canada lost Thursaanth Anantharajah in the very first over when he was trapped LBW by a full-length Asitha Fernando delivery. Yet another Sri Lankan, but representing Canada, Bhavindu Adihetty made a useful 22 at the top of the order.

The inexperienced Canada batting lineup lost wickets at regular intervals as the young Lankans showed the superiority and variety in their bowling attack by using 8 bowlers. Middle order batsman Arslan Khan was the only batsman to show some resistance as he made an unbeaten 42. Left-arm spin duo of Thilan Nimesh and Damitha Silva as well as Pacers Lahiru Kumara and Asitha Fernando took 2 wickets apiece.
Sri Lanka will next take on Afghanistan on Saturday (30th January) and another win will ensure their qualification to the quarter-finals.