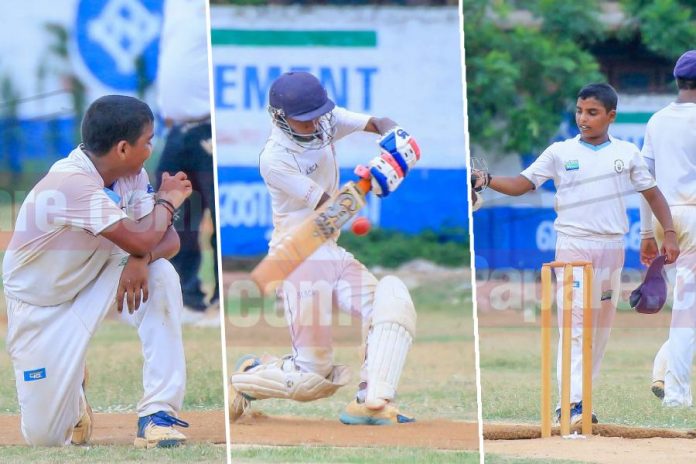 Here are the results of the Singer Schools U13 Division I Cricket tournament first round matches at the end of 03rd October.

The junior battle of the South was played today between Mahinda College, Galle and St. Aloysius College, Galle in the Singer Schools U13 Division I Cricket tournament. The visiting team Aloysius after winning the toss opted to field first. Having the advantage of home conditions Mahinda College Juniors puts up a decent score on board by scoring 176 runs for 5 wickets and declared the first innings completing 45.2 overs. Dinura Kalupahana scored a brilliant century for the home team and well supported by Nikil Jayaweera scoring half century. Hasindu Dilmin was the pick of the bowlers by picking 3 wickets for 30 runs.

Mahinda College bowlers were too good for the visitors when they bowled them out for just 27 runs in 21.2 overs. Tharusha Dilshan demolished the batting line up by taking 5 wickets for no runs while Thusitha Dema and Dinura Kalupahana shared two wickets each for 07 and 10 runs respectively.

The match ended up a draw and Mahinda College gained points by winning on the first inning.

The home team invited the visitors to bat first after winning the toss and the juniors from Gampaha scored decently before they declared their inning for 173 runs for the loss of 9 wickets completing 58 overs. Nethika Alathgama was the highest scorer for Bandaranayake scoring 54 runs while Hashen Wickramasinghe and Dinuga Karunarathne scored 27 runs and 20 runs respectively. Nelith Chathruka chipped in with 4 wickets for 27 runs and Thanuga Palihawadane took 3 wickets for 37 runs.

Chasing down the target it was a solid batting performance by the home team juniors when they ended up for the day by scoring 176 runs for the loss of 6 wickets in 32 overs. Vishash Kuruduwage scored 84 runs and Hasitha Wickramasinghe scored an unbeaten 44 runs. Manidu Herarth took 2 wickets for 44 runs.

First innings points goes to the home team Thurstan Juniors and the match ended up draw.

After winning the toss the home team invited the junior Careyites to bat first and bowled them out for 94 runs in 56.2 overs. Padamathan Kavithan was the top scorer for Carey scoring 21 runs. Pawan Jayawardane managed to take 4 wickets for 23 runs while Osanda Pramuditha and Ramika Lakdun shared 5 wickets between them by taking 3 for 16 and 2 for 27 respectively.

Nalanda College juniors batted till the umpires called it a day and scored 241 runs for the loss of just 4 wickets in 38 overs. Once again it was Pawan Jayawardana who performed for Nalanda by scoring 86 runs not out while Charaka Gunethilake scored 58 runs.

The first innings points was taken by Nalanda while the match ended up draw.