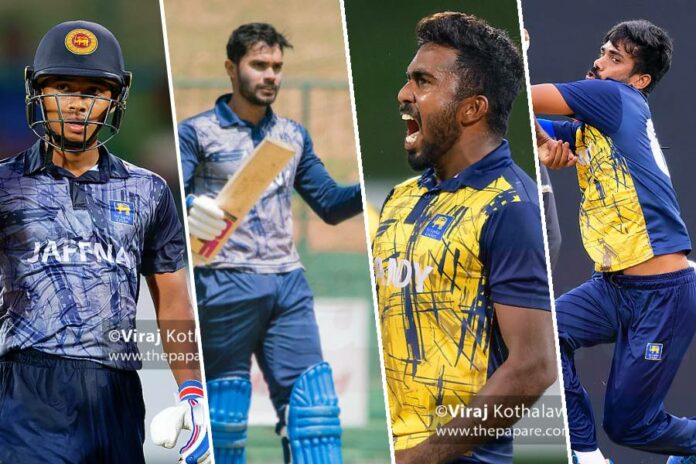 The most elite domestic cricket tournament in Sri Lanka, Dialog-SLC National Super League 2022, putting together the high achievers of the club tournament, came to a close with team Jaffna being crowned as champions.

Amidst all the talk about the lack of quality in Sri Lanka’s domestic cricket, kudos to the SLC for putting up such a tournament. Although the top tier players in Sri Lanka – who were initially supposed to be the core of the tournament – were away on national commitments, the tournament still had its competitiveness with the youngsters taking centre stage.

Some exciting talents took maximum advantage of the opportunity to stun the cricket-loving audience in Sri Lanka as the games were televised by Sri Lanka’s No.1 sports hub, ThePapare.com with the support of Dialog Axiata and the SLC.

Now let’s have a look at the tournament in numbers.

Although Jaffna won the championship, it was Kandy who was the high-riding team throughout the tournament. They won 6 out of their 8 games – the most by any team in the tournament – and topped the league table with 30 points.

Highest team total: The 343 runs Kandy scored against Galle was the highest team total of the tournament. Kandy openers, Lahiru Udara and Niroshan Dickwella put together the highest partnership of List A cricket in Sri Lanka – 233 runs – to elevate their team to this mammoth total.

Largest winning margin by runs: Jaffna defeated Dambulla by 176 runs to record the biggest victory by runs in the tourney. Jaffna made a persistent 255 in that game with the help of 69 runs from Dhananjaya de Silva and undid Dambulla for just 79 runs. DDS picked up 3 wickets to top the bowling chart too. This was also the lowest team total in the tournament.

Largest winning margin by wickets: Team Galle were given a revised target of 197 runs to get in 25 overs in their second game against Jaffna. They needed that win to stay alive in the tournament and boy didn’t they deliver. Youngsters Pabasara Waduge and Dhananjaya Lakshan simply toyed with the experienced Jaffna bowling line up which had the likes of Nuwan Pradeep, DDS, Ishan Jayaratne and Co. Waduge made 92 not-out off 70 deliveries and Lakshan made 70 off 44 to win the game with 8 wickets intact.

Most runs: One of Sri Lanka’s most stylish batters, Dhananjaya de Silva, finished as the highest run-scorer of the tournament. Having been discarded from Sri Lanka’s white ball team, DDS made the best of this tournament, scoring 461 runs at a staggering average of 76.83 with 2 hundreds and 3 fifties to his name.

Behind him was 22-year-old Nuwanindu Fernando, who was magnificent with the bat in hand. He made back-to-back hundreds to be the only other batter to score 2 hundreds in the tournament. He ended with 365 runs to his name and the title for the best batsman of the competition.

Niroshan Dickwella and Oshada Fernando are the ones who were closely behind Nuwanindu. Both batters were playing to recover their lost place in the Sri Lankan team and they did make quite a statement in the tournament. Dickwella piled 339 runs in his tally while Fernando fell one run short of him.

Most wickets: The young and energetic Pulina Tharanga made a telling impact once again in Sri Lanka’s domestic cricket arena. The thrilling leg spinner bagged 19 scalps in 8 outings to stand way above the rest in contention. He was also elected the best bowler of the tournament for his brilliant display of leg-spin.

Fast bowlers dominating the wickets table is a rare sight in Sri Lanka’s domestic scene. But in this tournament, 4 out of the top 5 were seamers. Right-arm speedster Asitha Fernando bowled his heart out in the tournament. He was the second highest wicket-taker with 14 wickets and those numbers don’t really reflect how skilful his seam bowling was.

Lahiru Samarakoon was a surprise package that emerged in this tournament, handy with both bat and bowl. The slightly wrong-footed fast bowler bagged 13 scalps while Lahiru Madushanka ended with one wicket less in his tally.

Highest individual score: It is safe to say that Oshada Fernando found his mojo in this tournament. The right-hander was going through a lean patch in international cricket before smashing over 300 runs in this tournament to become the fourth highest run-getter. His 138 runs against Dambulla at SSC was the most by any batter in an innings.

Best bowling figures: Once again, it is Pulina Tharanga on the podium. His 6 for 29 to wreck Team Galle was sensational. It was also the most wickets in an innings in the tournament.

Most sixes: Kandy’s pinch-hitter, Lasith Croospulle, tops the list for most number of sixes in the tournament with 8 maximums to his name. Galle opener Ashan Randika struck 5 sixes in a single innings against Dambulla to hold the record of most sixes in an innings in the tournament.

Most economical bowler (Min. 35 overs): Having bowled 70 overs in the tournament, left-arm spinner Prabath Jayasuriya gave away only 274 runs to his opponents. An astounding economy rate of 3.91 makes the Colombo bowler one of the most valuable in the tournament.

Most dismissals as a wicketkeeper: There is a reason why Niroshan Dickwella is called the best gloveman in Sri Lanka. He has proved it yet again by registering 12 dismissals to his name in this tournament too. He grabbed 6 catches and effected 6 stumpings in 7 games.

Most catches as a fielder: 22-year-old Jehan Daniel held onto 8 catches in this tournament to stand at the top of that list.

The tournament had its ups and downs, with both veterans and newbies alike showing what they are capable of, a promising sign for Sri Lanka Cricket.

Afghanistan bat first in a must-win game for Sri Lanka