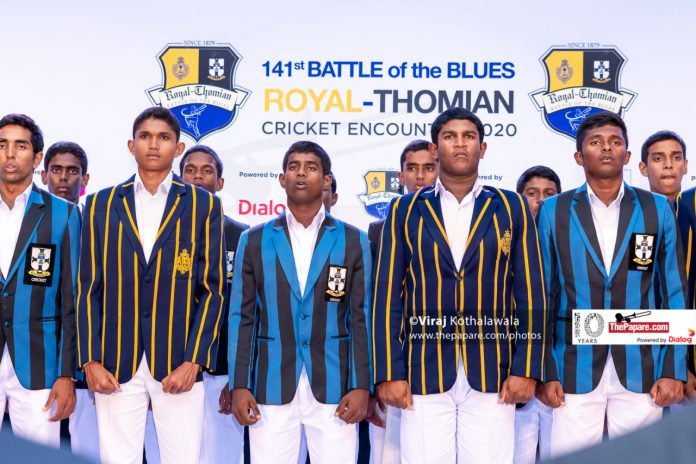 The 141st edition of the Royal-Thomian annual Battle of the Blues encounter will take the spotlight on the 12th, 13th and 14th of March as the indomitable Royal spirit will meet the famous Thomian grit yet again, at the SSC grounds, Colombo.

The ‘Battle of the Blues’ is the most celebrated school-level sports encounter in Sri Lanka and is also distinguished for holding the honour of being the second longest uninterrupted cricket series played in the world, second only to the annual encounter played between St. Peter’s College, Adelaide and Prince Alfred College, Adelaide, Australia, which began just a year earlier.

The two prestigious institutions are playing for the most coveted D. S. Senanayake Memorial Shield which was first presented in 1928 although the Battle of the Blues dates back to 1879.

The overall win-loss tally between the two schools stands at present on 35 wins for Royal and 35 wins for S. Thomas’, with the highly debated match in 1885 where Royal College was all out for 9 runs, with no play on the second day,  considered a win by S. Thomas’ and a draw by Royal.

Royal last tasted victory back in 2016 in a thrilling encounter under the leadership of Geeshath Panditharathne, while S Thomas’ most recent win came last year when Sithara Hapuhinna and co defeated Royal by 7 wickets.

2019/20 season
After their promotion from division 02 last year, the Royalists have fared quite well in the division 01 tournament as they have managed to win 4 out of 16 matches under the leadership of Thevindu Senaratne.

Key Players
Sri Lanka under 19 caps, Kamil Mishara and Ahan Wickramasinghe will be critical to Royal’s success along with Kavindu Madarasinghe and Isiwara Dissanayaka who have had a decent 2019/20 season with the bat.

On the bowling front, spinners Prashan Kalhara and Gishan Balasooriya have been dominating the wicket-takers column as both bowlers have surpassed the 50-wicket mark this season. Seamers, Kavindu Pathirathna, Lahiru Madushanka and Skipper Thevindu Senaratne will also have to have a major role to play with the ball, if Royal College is to make any inroads at SSC.

2019/20 season
Under the leadership of Thevin Iriyagama, the Thomians have been unbeaten in the 2019/20 season, securing 4 outright wins in the 17 matches they’ve played.

Key Players
The Thomians boast a strong batting unit with the likes Ryan Fernando, Maneesha Rupasinghe and Umayanga Suwaris, who was named the Best Batsman of the last big match, in their lineup. All of them have surpassed the 500-run barrier this season. Another aggressive batsman to look out for is Ravindu De Silva who excelled at the recently concluded Under 19 World Cup in South Africa as the 2nd highest run scorer of the tournament.

Their bowling attack will be led by the star spinner Dilmin Rathnayaka who has secured 64 wickets in the season and Sri Lanka under 19 cap Yasiru Rodrigo though he has missed most of the season due to national duties.

Both teams will rely on their batsmen who have been impressive throughout the season so the bowling attacks will have the added pressure to bring in the x- factor to change the tone of the game at SSC.

Considering the season’s form, it is hard to pick a clear favorite for this year’s clash, but one thing that can be counted on is the quality of cricket through the 9 sessions of play as both schools will eye a victorious start to the new decade.

All the action from the 141st Battle of the Blues will be brought to you live on ThePapare.com, Dialog tv and Mytv on all 3 days from 9.00am onwards.