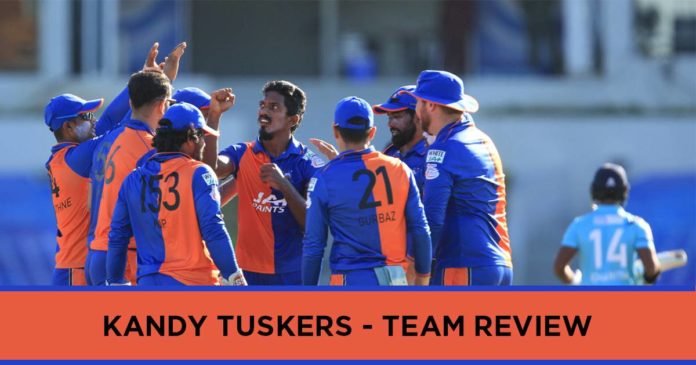 The Kandy Tuskers came into the Lanka Premier League 2020 depleted, however, threatened to cause some upsets in the early stages of the tournament before falling away to finish 5th in the table and subsequently were knocked out after the league stage.

The Tuskers had a disappointing run in the tournament, winning just 2 games of the 8 in the league stage, yet could still have made it through to the semi-finals if they had a better net run-rate than the Galle Gladiators. A number of big losses put paid to that idea though, as they became the first team to be eliminated. However, if there is anything to boast of, a silver lining, a consolation, it’s the fact that their two wins came against the two eventual finalists of the tournament, the Gladiators and the Stallions.

Watch – The Steyn gun is raring to go!

The campaign started off in promising fashion, against one of the tournament favourites, the Colombo Kings. However, having blazed their way to 219, then reduced their opponents to 168/6 (who were then left needing 52 to win off the last 3 overs) the Tuskers let the game slip into a Super Over and it was all downhill from there. An iffy decision by the standing umpire came in the Super Over, but the Tuskers only had themselves to blame for letting the game slip out of their grasp.

Another near miss came in their 2nd game, this time against the Dambulla Viiking. Chasing 195 to win, the Tuskers looked reasonably placed at 84/3 in 9.4 overs when the rains came down, catching them short of the Duckworth-Lewis par score of 89. The wicket of Kamindu Mendis in the previous over, turned out to be the turning point as the par score rose with his dismissal.

A win finally came in their 3rd encounter, against the team that proved to be their arch nemesis, the Galle Gladiators and then they managed to somehow keep themselves alive till their last game, courtesy a win against the eventual Champions Jaffna Stallions. But 4 heavy defeats on either side of that second win, pushed them to the bottom of the table.

Rahmanullah Gurbaz kicked off things for the Tuskers with a swashbuckling half century in the tournament opener alongside captain Kusal Perera, a pairing that surely gave hope to all Kandy supporters. Another man who started off phenomenally was Brendan Taylor, whose 51 against the Gladiators took Kandy to their 1st win of the tournament. However, none of them could really string together any consistency as the tournament wore on.

Kamindu Mendis was perhaps the biggest disappointment for the Tuskers. Much has been said of the ambidextrous youngster, however, things just didn’t turn out the way he would have wanted and he ended the tournament with 51 runs and 0 wickets in 5 matches.

Overseas signings Irfan Pathan and Munaf Patel proved to be beyond their best while Seekkuge Prasanna and Dilruwan Perera were not able to produce anything of significance during the tournament.

A tumultuous pre-tournament phase saw the Tuskers lose 4 key overseas signings in Chris Gayle, Liam Plunkett, Wahab Riaz (pulled out of the tournament) and Sohail Tanvir, who was ruled out after testing positive for COVID 19. The signing of Dale Steyn seemed like a godsend, but due to his late arrival, unfortunately, he only featured in the team’s final 2 games.

Test caps Vishwa Fernando and Lasith Embuldeniya warmed the bench for much of the tournament, while Priyamal Perera was given just one game. Another one to miss out was Kevin Koththigoda, who was surprisingly not snapped up in the initial draft and was only brought into the Tuskers squad later on in the tournament.

The Afghan pacie stole the headlines after a verbal duel with the Gladiators’ Mohammed Amir and Shahid Afridi, but also led the way with the ball for the Tuskers in the 1st half of the tournament. He was one of the leading pacemen of LPL 2020, before unfortunately having to leave midway through the tournament.

Mendis was the top scorer for the Tuskers and managed to hold the middle order together on a number of occasions. He also showed glimpses of why he is such a highly rated batsman in all forms of the game but would perhaps be somewhat disappointed with not kicking on to make any big scores at the LPL.

Gunaratne was overall the best performer for the Tuskers, leading the wicket column and also contributing some valuable runs lower down the order. After conceding 20 off the last over of the opening game that led to a super over, Gunaratne turned his campaign around with some impactful performances in a number of games, particularly in the 2 games the Tuskers won.

Losing two games which they should have won early in their campaign, was ultimately what eliminated the Tuskers from the LPL. Who knows, if they had pulled through to win both, or even one of those games, we could’ve been having a very different conversation at the end of the tournament.