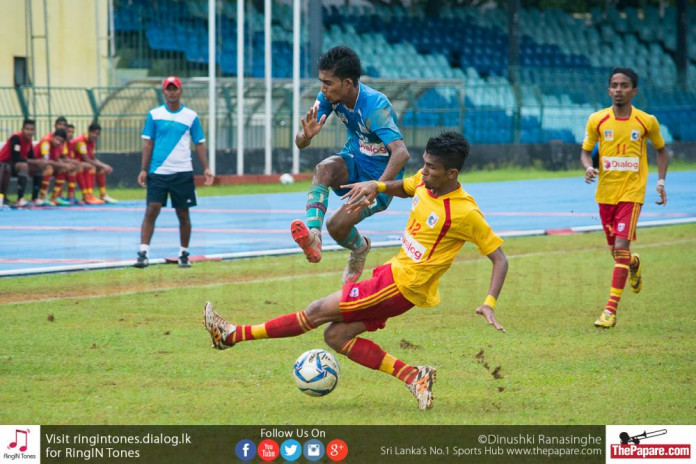 Crystal Palace ended the season on a high with come-from-behind 2-1 win over the Airmen, to secure the 5th spot in the Super 8 table, on a gloomy day at the Sugathadasa Stadium.

Without the experience of Charitha Ratnayake and Dasun Paranavithana at the back, they got off to the worst possible as Air Force went ahead just 5 minutes into the game. Centre back Buddhika Silva missed a clearance which allowed Nipuna Bandara to fly down the wing and put in a cross which Kavindu Ishan headed home. The airmen continued to dominate the early stages of play as soon after that Ishan had fierce half volley tipped round the post by keeper Ranga Navaratne.

Towards the end of the first half Crystal Palace came back in to the game with skipper Shifan Mohamed let loose a pile driver from range only to see it tipped over by Arunasiri in the Air Force goal.

Christopher Erastus then rounded the keeper but from a tight angle and with the Air Force defenders getting back, could only find the side netting. Aba was also denied by the legs of Arunasiri as Crystal Palace built up immense pressure towards the end of the half.

In what was to be the last play of the half, they finally got their reward, as Air Force failed to clear a corner and Erastus smashed home a volley from inside the box to restore parity at half time. In the second half chances were hard to come by for both teams and they both struggled to test the keepers. Air Force had a big penalty shout after Ishan was bundled over by Azmil in the Palace box, but the referee allowed play to go on.

The Airmen then hit the post as a low cross from Nazar took several deflections in the box before hitting the far post and going out of play.

The post then worked against them for the second time as Christopher Erastus pounced on a missed clearance from Kumara Lankesara before unleashing a first time curling effort from 35 yards out on the left hand side, lobbing the keeper and going in off the far post. Erastus had been in good form throughout the Super 8, but this goal undoubtedly the best of them all. Air Force tried hard to find the equalizer but it was just not to be, and their best effort came seconds from the final whistle as Lakmal Gunasinghe had an effort from close range tipped over by Ranga Navarathne as Crystal Palace held on for a morale boosting 2-1 win to bring the curtains down on their campaign.

Jubilant coach Devasakayan of Crystal Palace had this to say: “I’m really happy about the way we played, most of my players were either injured or on painkillers and against a team like Air Force who have good fitness, this was a great result for us. Given the circumstances we encountered I believe our Super 8 campaign was a great success.”