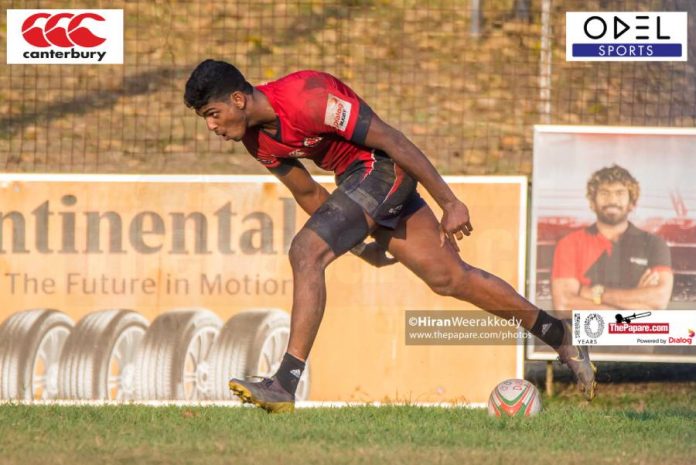 CR & FC managed to triumph over their arch rivals Havelock Sports Club 30 points to 17 in their Dialog Rugby League 2019/20 clash, which worked off at Longdon Place. With this win, the red shirts clinched the ‘Mathysz Trophy’ with an aggregate of 52 points to 47.

Prince Chamara slotted home an early penalty four minutes after the game kicked off, as the red shirts were penalized for rushing up as they were caught offside. The Havies had the chance to further increase their lead but unfortunately skipper Mithun Hapugoda could not dot the ball down on the try line. (CR 00 – 03 HAVELOCKS)

The Havies dominated the possession in the first 20 minutes but the CR defense held firm on their own line despite repeated Havelock charges. The red shirts quickly regrouped; the centre Dinuk Amarasekara threw a timely pass to Kevin Dixon, who sent the top try scorer of the league Janidu Dilshan through for a try on the right wing. (CR 05 – 03 HAVELOCKS)

The red shirts were hindered with self-inflicted disciplinary errors especially while defending the maul as skipper Omalka Gunarathne saw yellow for collapsing the maul, but the park club missed out on capitalizing on their numerical superiority.

CR on the other hand managed to extend their lead further when the try scorer Janidu Dilshan opened up space for the winger Riza Rafaideen, as he cantered across the whitewash. Rafaideen missed out on adding the extras as CR missed the services of the veteran Riza Mubarak. (CR 10 – 03 HAVELOCKS)

The Havelocks were loose at times during the frenetic final phases of the first half, when CR were able to take advantage of the Havies’ mistakes through the boot of Murshid Zubair who landed a penalty through uprights, the red shirts took a ten-point lead to the lemons.

CR got off to the best possible start, as they hit the ground running with two early tries within the first 10 minutes of the second half, leaving the park club scratching their heads in search of answers. Dinuk Amarasekara scored the first try as he fended off three Havies defenders and found the whitewash. A few phases later, Kevin Dixon went through the Havies’ defense as he committed two defenders towards him and offloaded the ball to Janidu Dilshan to score the bonus point try. (CR 23 – 03 HAVELOCKS)

Read More – End of the road for Nalaka Weerakkody

Both teams were short of one man as Theekshana Dassanayake and Sharo Fernando were sent to the sin bin for indiscipline as the game heated up. The Havies finally managed to score with their rolling maul gaining them valuable meters, as Shawket Lahir broke away from the maul and powered himself over the line for the first try for Havies. Santhush Algama added the extras over from a tight angle. (CR 23 – 10 HAVELOCKS)

CR took the game away from the park club when Harith Bandara took a quick tap as he ran through the Havies defense, but was brought down meters short. Skipper Omalka Gunarathne picked the ball from Bandara and bulldozed his way over from two meters out. Riza Mubarak came from the bench and added the extras. In the last move of the game Havies scored a consolation try through Vimukthi Rahula. It was too late for the park club as they suffered their 3rd defeat of the season.