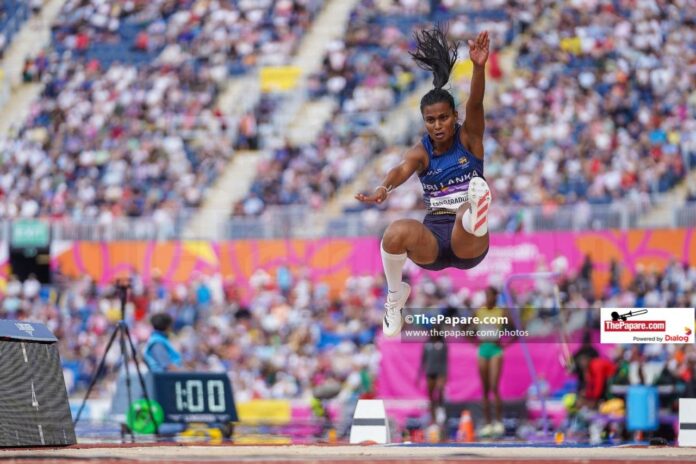 Sri Lanka’s premier long jumper Sarangi Silva managed to qualify for the Final of the Women’s Long Jump, after an impressive performance in the Qualification Round.

Silva has a Seasons Best of 6.65m which she achieved in February of this year – this is also her Personal Best.

Earlier in the day, Middle-distance runner Gayanthika Abeyrathne took to the track for the 2nd time at the games, this time for the 1500m heats. Unfortunately, she missed out on the finals by a margin of just .74 seconds as she finished 7th in Heat No. 2 with a time of 4:17.97. The top 5 from each of the two heats, along with the next 2 fastest finishers went through to the Final. 35-year-old Abeyrathne was well behind her Personal Best of 4:09.12 and her Season’s Best of 4:11.45 set in February of this year.

Read: Sport doesn’t matter… but it does

After an impressive run in the 1st round of the Men’s 400m a couple of days ago, Malinga Kumarage once again took to the track to compete for a place in the Final to be held on Sunday. Kumarage lined up in semi-final 3 alongside a strong field, including British record holder and World Championships Bronze Medalist Mathew Hudson-Smith.

Kumarage, unfortunately did not have the best of races as the National Champ finished with a time of 47 seconds flat, in 7th place. Hudson-Smith took the race with a time of 45.77 and Jamaica’s Nathan Allen finished second with a time of 45.99, the pair taking the two automatic qualification spots: the first two and the next two fastest going through to the final.

Sri Lanka’s Steeplechase record-holder Nilani Rathnayake took part in the Final of the 3000m Steeplechase late last night as the final Sri Lankan Athlete to take to the track on Day 8 of the competition. Unfortunately, she could not produce anything near her Personal Best as she finished 7th with a time of 10:00.34. Jackline Kepchoech of Kenya set a new Games Record of 9:15.68 as she took Gold ahead of Elizabeth Bird of England and Peruth Cherutai of Ethiopia.