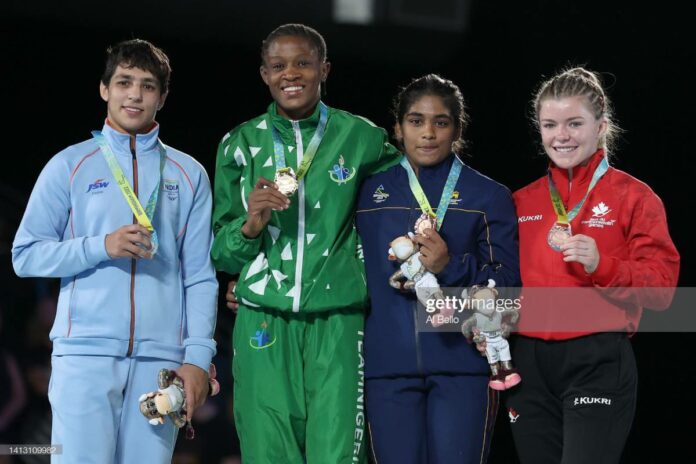 18-year-old Nethmi Poruthotage took the first medal on offer on the Wrestling mat earlier today, as the youngster grabbed Bronze in the Women’s Freestyle 57kg event.

Poruthotage also now holds the distinction of being the youngest Sri Lankan to medal in Games history. The youngster was up against a seasoned campaigner in Irene Symeonidis of Australia, who was runner-up in the Oceania region in 2019. The scores read 10-0 to Poruthotage as she won in 1 minute and 51 seconds, the official decision – Victory by technical superiority – without any point scored by the opponent.

She met with defeat earlier in the day, going down 10-0 to Indian Anshu Malik in the Semis after she received a walkover against Cameroon’s Emmilienne Essombe.

Suresh Warnakulasuriya was the other Sri Lankan wrestler to take the mat on Friday, finishing with a loss and a win apiece. His defeat came at the hands of Canadian Alexander Moore, while he defeated Mauritius’ Jean Frederic Marianne 86kg pre-quarters.

Gayanthika Abeyrathne bowed out of the Games with a 7th place finish in the Women’s 1500m Heats with a time of 4:16.97, which was not enough to take her through to the finals of the event.

Sarangi Silva did well to qualify for the Final of the Women’s Long Jump, with a leap of 6.42m. She went through as one of the non-automatic qualifiers with the 10th best jump in the qualification round. The final will be held on Sunday (7) at 11.35 pm SL time.

Kalinga Kumarage’s time in Birmingham ended when he finished 7th in Semi-Final 3 of the Men’s 400m with a time of 47.00. Nilani Rathnayake also finished 7th in the Final of the Women’s 3000m Steeplechase, producing a time of 10:00.34.

Sri Lanka’s Mixed Doubles pair of Sachin Dias and Thilini Hendahewa took one step closer to their dream of a medal, defeating Robert Sommers and Johanita Scholes of South Africa in straight sets 21/18, 21/8 in their quarter-final encounter. The semis are scheduled to be held tomorrow at 5.10pm SL time against English pair and past medalists Marcus Ellis and Lauren Smith.

Dias’ brilliance continued in the Men’s Doubles alongside partner Buwaneka Goonethilleke as the pair beat the Maldives pair of Ahmed Nidal and Ajfan Rasheed 21/12, 21/8. They will face Malaysia’s No. 2 Doubles pair of Peng Soon Chan and Kian Meng Tan in the Quarterfinals later today.

Both Dumindu Abeywickrama and Niluka Karunaratne lost their tough Men’s Singles ties to Srikanth Kidambi of India and Jia Heng Teh of Singapore respectively in straight sets.

Read: Sport doesn’t matter… but it does

Sri Lanka’s Men’s pair gave Aussie medal hopefuls Chris McHugh and Paul Burnett a real scare in the quarters as Malintha Yapa and Ashen Rashmika clinched the 1st set 21/16. The Aussies came storming back to win the next two sets 21/16, 15/9 and take their spot in the semis.

The Women’s pair of Chathurika Weerasinghe and Deepika Bandara were no match for Canadian pair Sarah Pavan and Melissa Humana-Paredes – 21/9, 21/11.

Chanithma Sinaly and Shamil Wakeel had a good day on the court, finishing off Amanda Haywood and Shawn Simpson of Barbados in the Plate quarter finals 11/7, 11/9.

Unfortunately, that’s where the good fortune ended for Sri Lanka as Wakeel and Ravindu Laksiri lost their Men’s Doubles Round of 16 tie 11/7, 11/7, while Laksiri and Yeheni Kuruppu were also outdone by Ashley Khalil and Jason Ray Khalil of Guyana 11/10, 11/3.