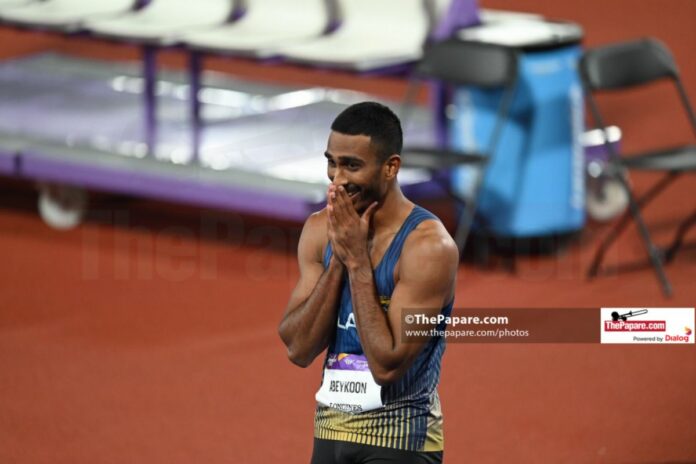 It’s just before 2.00 am in Sri Lanka as the athletes are introduced for the Men’s 100m Final at the Birmingham Commonwealth Games.

In Lane No. 2 is the fastest man in South Asia, Yupun Priyadarshana Abeykoon. The Sri Lankan was the fastest qualifier in the Heats of the event but had looked stiff just a couple of hours before the final, as he scraped through as one of the 2 non-automatic qualifiers.

In homes all around Sri Lanka, people are waking up from the rushed nap they’d snuck in after watching the semis just before midnight, tvs are being switched on, pop-up and ad infested streams are being frantically loaded onto laptops and phones. Elderly parents are being woken up by those who’ve stayed up, not risking a little shut-eye, in case they fell asleep and missed the tiny 10-second window of a potentially history-making sprint. Facebook, Twitter timelines, Whatsapp threads, all quiet with a kind of pregnant anticipation of what’s to come.

As the Athletes take their places, the camera pans to each one of them, with their Personal Bests in the event flashing at the bottom of the screen. Abeykoon is the 4th fastest man among them, his 9.96s behind Ferdinand Omanyala’s 9.77s, Akani Simibe’s 9.84s and Benjamin Azamati’s 9.90s and marginally ahead of home-town hero Nethaneel Mitchell Blake’s 9.99s.

Abeykoon, notorious for his not so perfect starts, is going to need a very good race if he’s to challenge for a medal. By his own admission, the goal was always just to get into the final at the Games and by being among those 8 athletes lining up in front of a packed house on Wednesday night in Birmingham, he’d already met his target, whatever came next was a bonus.

The crowd goes deathly quiet in the stadium, there’s a collective intake of breath by every Sri Lankan watching and bang. The sprinters are off.

Abeykoon is in front, or is he, it’s almost impossible to separate the 8 athletes at the 50m mark. Then Omanyala pulls ahead, Abeykoon looks like he’s in 2nd place or is it 3rd, 4th or 5th as he crosses the finishing line? Who can tell. The doubts start creeping in, one dares not hope until the confirmation comes up on the screen, there have been too many shattered dreams of late.

The World’s eyes are on Omanyala, the 3rd fastest man in the World this year, the man whose chances at the World Championships last month were destroyed by the bureaucracy of acquiring a Visa to the United States, the idea of a Kenyan Sprinter – what an anomaly.

But in Sri Lanka, there are quiet cheers in homes, silent fist pumps, heads tilting up towards the heavens, big smiles and undoubtedly a few tears. Those Whatsapp threads? Well, they’ve exploded. Messages fly through from new friends to old, between colleagues, family, partners. As photographs start coming in from Birmingham, those are fired across on social media platforms – Abeykoon with a look of disbelief on his face, with his face in his hands, a touching embrace between him and Para-Athlete Palitha Bandara, who had just had a Silver medal winning Discus Throw. The nerves have been replaced excitement and joy.

In just a couple of hours, these same Sri Lankans are going to wake up to a regular Thursday in a bankrupt country. Some of them will lug themselves to work in overcrowded busses or trains, some will return to fuel queues and all of them will have to sit through the regular powercuts.

Sport is a great many things to many people, but now especially, it is an escape from reality, to some, a single source of joy, it’s how so many of us experience community, connection, a sense of belonging.

This medal isn’t going to ease the cost of living, it’s not going to change the fact that Sri Lanka is facing one of its worst economic crises. In the grand scheme of things, sport, doesn’t matter… but somehow it does.