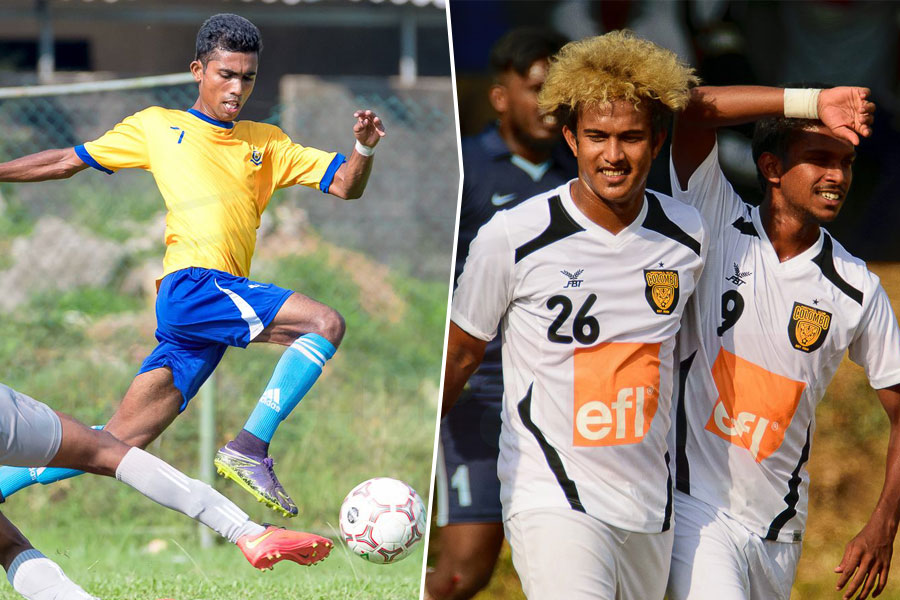 Air Force SC secured a quarter final spot in the FA CUP 2016/17 after comprehensively defeating Matara City 3-0 at the Navy Base, Welisara.

Kavindu Ishan scored a hat-trick against his home town club while a poor midfield led down Matara City’s shot at the FA Cup dream.

Air Force SC booked their place in the round of 16 by defeating Civil Security 4-3 on penalties..

Commencing the game, both teams played attacking football in the opening first few minutes, trying to break the deadlock quite a few times.

A neat move involving with Chathuranga Fernando from the left nearly opened the score for Air Force. The cool headed left winger Kavinda Ishan took his first shot a goal in the 09th minute, but it was denied due to off side.

Harsha Fernando who was brilliant in the left-back role throughout the game displayed his class when ran in with the ball from the left flank neatly passed in to Kavindu Ishan, who smashed it in to the left bottom end to score the opener in 11th minute.

Air force played a complete dominating game with the ball afterwards maintaining possession which was a delight to watch by any neutral. Sampath Perera’s men entirely changed phase of the Matara City’s game plan by forcing them to defend the whole game.

In 3 minutes after a fantastic through ball sent by Kalum Perera found Kavindu Ishan again in the front who cut out beating a diving goal keeper and tapped in the ball for Air Force’s 2nd.

A lack of finishing from Bryan Weerappuli was too costly for Matara City through the game, which started from a counter attack where he was very slow.

The combination between Chathuranga Fernando, Dilshan Fernando, Harsha Fernando and Ishan which created a destructive diamond formation from the left was tactically successful throughout the game, proving Sampath Perera a tactical master stroke.

Chances kept coming in favor of the Air Force when a long pass sent by Ishan at Nipuna Bandara who lobbed it with Nuwan Welgamage, received it back for shot at goal but the shot was wide & also another move when Harsha Fernando who ran in to the penalty area unselfishly passed it to Kavindu for a shot, but the ball missed the net by inches.

With a poor first half performance, Matara City returned to the field intending to create upsets, were completely let down again by Bryan Weerappuli who received a through ball but failed to score dragging his shot wide.

Ishan who made things harder to the men from Matara created a magical chance for DK Duminda to put them 3-0 up but unfortunately went off target.
In what was a very controversial incident in the game Kavindu Ishan was bought down by his jersey in the penalty box by M.G.Ganesh was not awarded much to the fury of the Air Force bench.

As play moved on, in the 89th minute Kavindu Ishan netted in a scorcher to complete his hat-trick.

“Since this is a knockout tournament, from game to another I change my strategy. I changed the game plan for this match which worked out successfully. On the other hand it’s very humid and hot but as expected my team performed very well. We will commence our practices next Tuesday and will have be well prepared to face our next opponent.”

“My team gave a satisfying fight but was not quite enough, especially when you’re playing a team like Sri Lanka Air force who are very fit. We came in for away match and our mistakes which led them for two early goals. We are in a rebuilding phase and we will do great next season.”

Colombo FC defeated Pelicans SC 5-0 under the scorching sun in Kurunegala to qualify for the quarter finals.

Colombo FC took the initiative inside the first 15 minutes when Zarwan Johar calmly slotted two penalties to give the visitors the advantage while a red card to A.Fernando in the 12th minute sent the hosts down to 10 men.

Nagur Meera then added the 3rd as Colombo FC went into half time with a 3-0 lead.

It was laid back approach from the Champions League winners in the 2nd half with the game in the bag.

Danushka Madushanka would go onto add the 4th before Mohamed Mufees scored a header on the stroke of full time.