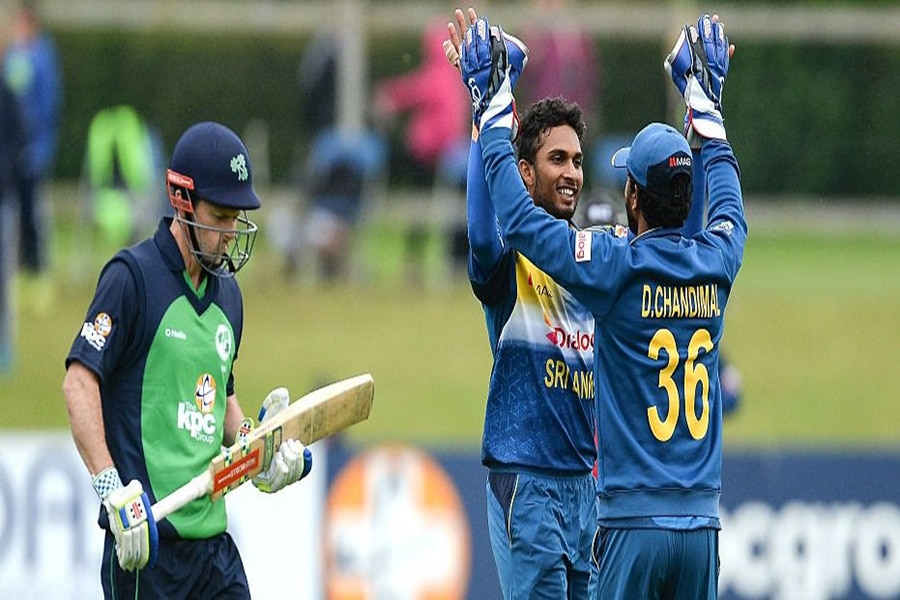 Sri Lanka lead the two-match series 1-0, the second and final game will be worked out at the same venue on Saturday. Chandimal struck a well-calculated 100* and took 4 victims behind the stumps while debutant, Shanaka became the third Sri Lankan to take five wickets on ODI debut.

Earlier after being asked to bat first, Kusal Janith Perera and Danushka Gunathilake, Sri Lanka’s newest opening pair started off brightly with the former stroking his Jayasuriya-like short-arm jabs over the mid-wicket region to the fence twice in the 5th over.

The two left-handers added 42 before Gunathilake loosely jabbed at a Barry McCarthy delivery just outside the off-stump and the edge flew straight to first slip. Perera fell in the next over as he closed the face of the bat too early to give a simple chance back to McCarthy as the debutant restricted Sri Lanka to 47 for 2 inside the first powerplay.

Skipper Angelo Mathews came in and upped the run-rate with a casual 53-ball 49 before he was castled by Max Sorensen in the 42nd over. Debutant Dasun Shanaka played a rollicking 42 from 19 balls, including 24 in five deliveries from Sorensen to give real impetus to the visitors’ late surge.

Chandimal’s first ODI century after five years had 50 singles, 10 twos and 6 boundaries as he neatly anchored the Lankan innings to remain unbeaten on 100 and push the final score to 303.

Chasing a mammoth 304 runs to win, the hosts’ started off steadily claiming regular boundaries in the first powerplay as their opening duo, Paul Stirling and William Porterfield bludgeoned 53 before Shanaka sneaked one through the defenses of Stirling.

The gentle right-arm seamer struck twice inside five overs as Ed Joyce and John Anderson chased down wide deliveries but only able to nick it to the wicket-keeper.

Skipper Porterfield and Kevin O’ Brien were plotting a surprise victory for the hosts’ as they made 73 and 64 respectively but the Lankan seamers led by Dasun Shanaka bowled wicket-to-wicket and defended the mammoth target.

Firstly, Porterfield mistimed a cover-drive and holed out to Kusal Perera at mid-off to become Eranga’s only victim. O’ Brien batted in his usual manner taking the bowlers to the cleaners with his aggressive stroke-play. Sadly for the Lankans, they dropped around 5 chances, especially of O’Brien which could have cost them if the Irish batsmen played to their true potential.

With the rain interrupting play, the target was revised to 293 runs from 47 overs but the Sri Lankans cleaned up the Irish tail after Pradeep caught O’Brien LBW in the 38th over. Skipper Mathews chipped in with two wickets in the end while Shanaka completed a memorable double, 42 and five wicket when he castled Sorensen in the 40th over. 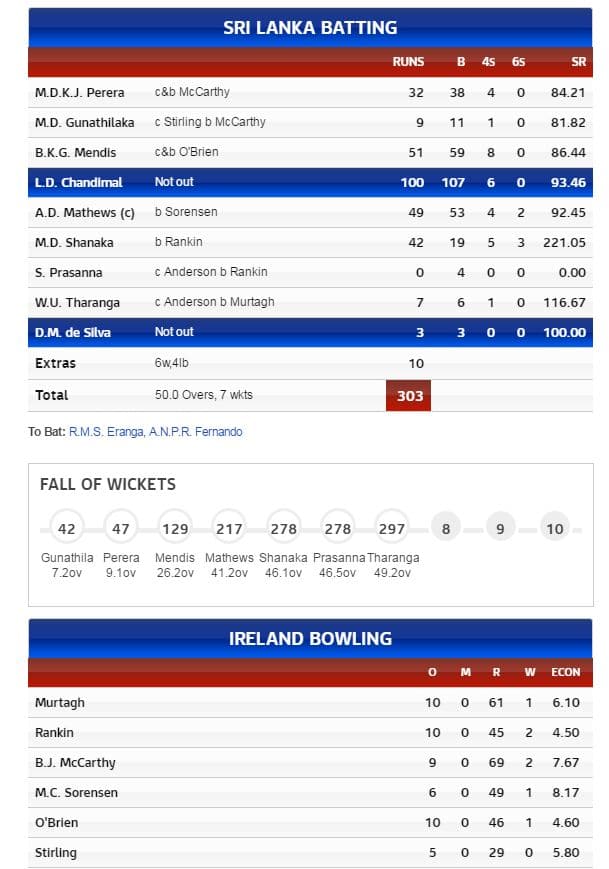 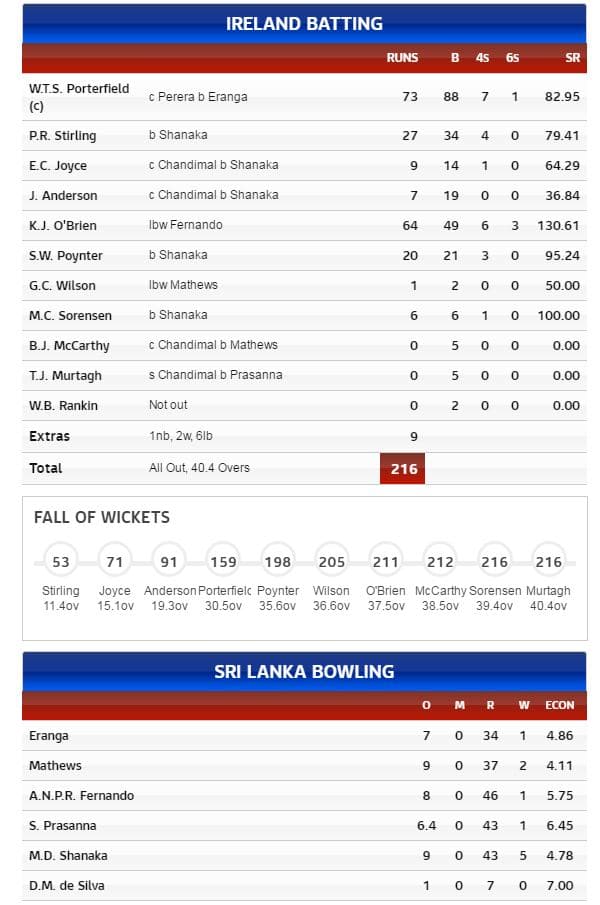