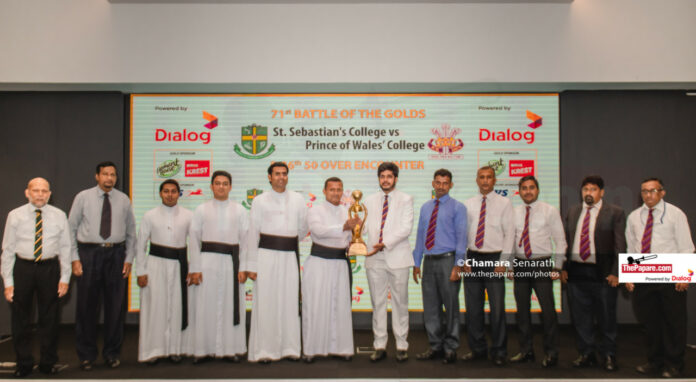 The 71st Battle of the Golds – Moratuwa will get underway on the 14th and 15th of January 2022 at the De Soyza Stadium in Moratuwa. The One-day encounter which is being played for the 36th time will follow at the same venue on the 16th of January.

The Cambrians will be led by the middle-order batsman, Dinura Fernando while the Sebastianites will play under the captaincy of stumper of the side, Sukitha Prasanna.

A crowd capacity of 50% of the seatings has been permitted for the game.

This big match was last played in 2019 for the 69th occasion which ended in a draw while the 34th one-day ended in favour of the Cambrians.

The tally between the two schools presently stands at six wins for the Cambrians and three wins for the Sebastianites. St. Sebastian’s College is the present holder of the cup, having last won it in 2011 under the captaincy of Sanitha De Mel.

In the limited over encounters, the Sebastianites lead with 17 wins to the Cambrians’ 14 with one tie and two abandoned games.

Cricketers from both schools have represented the game at the highest level, including 1996 World Cup winner Romesh Kaluvitharana and Sri Lanka Captain Duleep Mendis. The current players representing Sri Lanka include Oshada Fernando, Vishwa Fernando, Avishka Fernando, Praveen Jayawickrama and Amila Aponsu, all of whom are from St. Sebastian’s and Kusal Mendis and Lahiru Thirimanne are from Cambrians.

The coaches of the teams, support staff, umpires and match-officials will operate from a bio-secure environment for 7 days strictly in adherence to COVID-19 protocols under the supervision of the Regional Health Services.

As the principal sponsor, Dialog Axiata has made arrangements to LIVE stream the Limited Overs match via Thepapare.com, Dialog VIU mobile app and will also be shown LIVE on Dialog TV Channel 140.