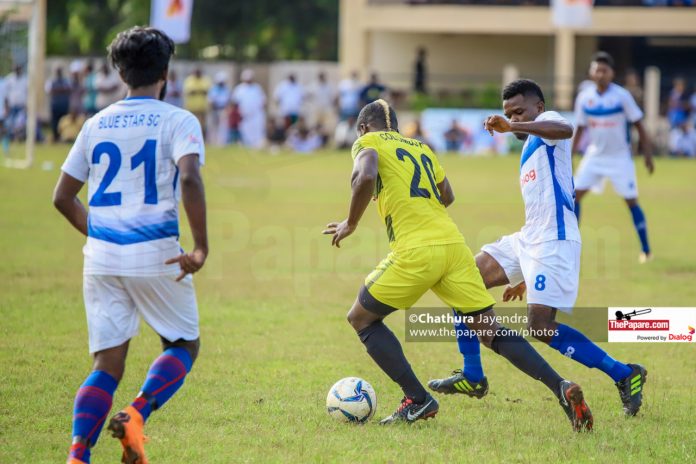 The initial match was hampered by crowd troubles and subsequently had to be abandoned after some of the crowd who invaded the pitch, to celebrate the Blue Star equalizer, assaulted the referee Mohamed Ashad.

22-days after the ugly events that unfolded at the Vernon Fernando Stadium in Kalutara the match recommenced from the 78th minute at the new venue and new referee (Nivon Robesh) assigned by the Football Federation of Sri Lanka.

As expected, though the time to be played was small, on a ground which suited the refreshed Colombo FC attack, it was a tough ask for Blue Star who needed desperate defending and luck to walk away with the three-points.

The men in yellow had multiple efforts and chances created from the likes of Bodric Dimitri, Zarwan Johar, Mohamed Fazal and Mohamed Rifnaz. The closest Colombo came was of Dimitri, whose deflected effort crashed off the upright and eventually cleared as the stranded goalkeeper Manjula Fernando looked on.