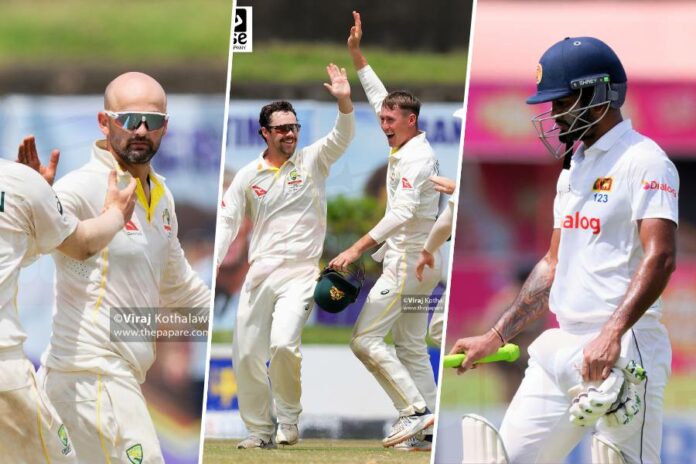 Sri Lanka’s second innings lasted only 111 minutes and 22.5 overs, lowest in their Test history as Australia won the first Test match by 10 wickets before the lunch break on day three at the Galle International Stadium.

Sri Lanka’s poor shot selection, mainly the sweep stroke brought the downfall as Travis Head and Nathan Lyon picked up 4 wickets each to bundle out the hosts for 113 runs inside one session.

Sri Lanka avoided the innings defeat by just 4 runs. In the fourth innings, David Warner needed only 4 balls to finish off the game.

Head, who had never picked up a Test wicket before today, ended with 4 for 10 in just 2.5 overs. Lyon started off taking the under edge of skipper Dimuth Karunaratne for 23. What followed next was absolute madness from the Sri Lankan batters as no batsman showed resistance to the turning ball.

Providing solid support for the two off-spinners, right-arm leg-spinner Mitchell Swepson dismissed Pathum Nissanka and Oshada Fernando for 14 and 12 respectively. Fernando came into the side as a Covid replacement for Angelo Mathews. The senior batter was tested positive for Covid-19 last evening after showing symptoms at the end of second day’s play.

Travis Head spun the ball sharply as he managed to go through the gap between the bat and pad of Dinesh Chandimal and Jeffrey Vandersay. Surprisingly, Dhananjaya De Silva shouldered a Travis Head delivery whilst Kusal Mendis, Ramesh Mendis and Niroshan Dickwella fell whilst attempting the conventional sweep and the reverse-sweep.

Earlier, Asitha Fernando cleaned up the tail quickly on day three morning as Australia were bowled out for 321, giving them a 109-run lead. Cameron Green was named player of the match for his brilliant 77 on day two.

The second Test match in the ‘Warne-Muralitharan’ Trophy will be played on the same venue from 8th July.