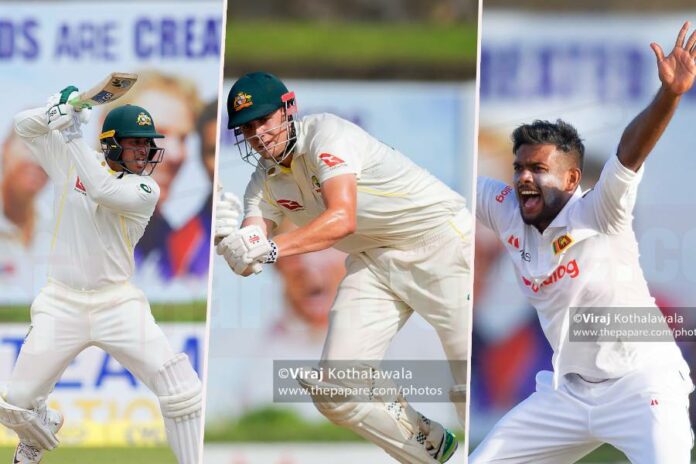 Cameron Green and Usman Khawaja hit 70s on a rain-interrupted second day’s play in the first Test match, as Australia took a 101-run lead against Sri Lanka in Galle.

After their bowlers bundled out the hosts for 212 on the opening day, the visiting batters put their team into the ascendency as they finished a shortened 44-over day two on 313 for 8, scoring 215 runs for the loss of only 5 wickets.

Sri Lanka struck in the first ball of the second over on day two when Dhananjaya De Silva took a brilliant air-borne catch off his own bowling to dismiss overnight batter Travis Head for 6.

Usman Khawaja, the highest run-scorer in Tests in 2022 with 822 runs at an average of 117.42, made a valuable 71 off 130 deliveries with 7 fours before he became Jeffrey Vandersay’s first Test wicket courtesy a good catch by Pathum Nissanka at short leg.

Wicket-keeper batter Alex Carey joined Cameron Green and they batted brilliantly on spin-friendly conditions to add a match-defining 84-run stand for the 6th wicket. They scored at a healthy rate as they consumed only 93 balls. Most of their scoring shots came off the conventional sweep and reverse-sweep as none of the Sri Lankan spinners were able to bowl a maiden so far in the Australian innings.

In the first session of the day (Lunch-Tea), Australia mustered 135 runs in 27 overs at 5 runs per over. Dinesh Chandimal took a brilliant catch after the Tea break to end the ominous-looking Green-Carey stand as Ramesh Mendis continued to be the only spinner who posed some questions at the Aussies.

Green was trapped LBW by Mendis and Mitchell Starc was caught and bowled by Vandersay as Sri Lanka took two crucial wickets towards the latter stages of the day. However, Skipper Pat Cummins made some lusty blows (26 runs off 16 balls with 1 four and 3 sixes) towards the close of play to push the lead above 100 runs.

Earlier, strong winds and rain created havoc in the first session. Plenty of temporary stands were destroyed due to the scary winds whilst the rain made sure the start of play was delayed by close to four hours.