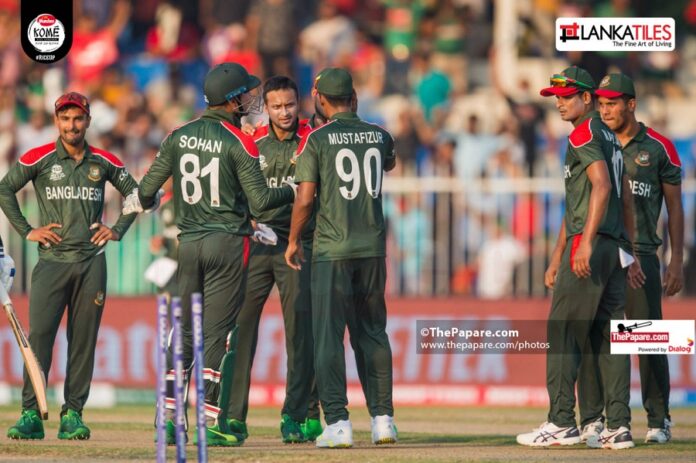 Bangladesh crashed to a five-wicket defeat against Sri Lanka in their first Super 12 match. Despite posting a very competitive looking 171-4, Sri Lanka managed to overcome a sticky start to their reply and eventually overhauled the target with 7 balls remaining. It was a forgettable day in the field for the Tigers, as crucial dropped catches and strange bowling decisions ultimately led to defeat.

A week is a long time in cricket

Exactly one week ago, Bangladesh suffered a shock loss against Scotland, the match seemingly in their grasp, before a spirited Scotland side won by 6 runs. The loss was met with incredulity amongst fans back home. It was a wakeup call that galvanised Bangladesh, leading to a hard fought victory over Oman and a crushing defeat of PNG. In the space of a week Bangladesh have transitioned from under achievers to serious contenders in the eyes of many. By virtue of qualifying as runners up in their group, they have entered the Super 12s in a group containing mainly non-Asian opposition, with indifferent form against the spinning ball. This has seemingly elevated their threat.

The haphazard batting displays on the first day of the Super 12s, only added to the sense that Bangladesh could cause a major upset in the tournament. However, by losing against Sri Lanka in the stifling Sharjah heat, Bangladesh have come full circle. Their shortcomings plain for all to see and progress beyond the Super 12s looking like a forlorn battle.

Bangladesh began the day with uncharacteristic calm, their openers negotiating the powerplay with increasing confidence. Their blueprint for success has been based on setting a defendable target and then letting the bowlers restrict the opposition, so they would have been unperturbed being asked bat. Rather than finding themselves a couple of wickets down after a handful of overs, as has been the norm in this World Cup, they were 41-1 at the end of the powerplay.

Naim began his innings playing mostly orthodox shots, not overhitting the ball. His obvious class became more apparent, as he mixed languid drives with more aerial shots. He reached his second fifty of the competition, from only his third game, off 44 balls. When Mushfiqur arrived at the crease, in his customary number four position, Naim played the anchor role in a fruitful partnership with Mushfiqur. The pair added 73 runs off 51 balls for the third wicket.

Mushfiqur’s unbeaten 57 off 37 balls was the most pleasing aspect of the innings for Bangladesh supporters. His dip in form and demotion in the batting order against Oman, has created some speculation over his future, but against Sri Lanka he rolled back the years. He unfurled his array of sweeps, nailing a couple of slog sweeps into the stands, backing it up with intelligent running between the wickets. With wickets in hand, going into the final few overs, a just criticism would be that an even higher target could have been achieved than 172, but the finishers stuttered.  Another 10-15 runs would have made a significant difference to the outcome of the match, perhaps it’s a small issue in the grand scheme of things, but on such points of difference can greatness be achieved.

Along with Mushfiqur, Liton was the other top order batsman who was short of runs and confidence. He made a promising 16 before he chipped a catch to wide mid-off, but the most interesting thing about the dismissal were the events that occurred in the aftermath. The wicket taker, a testosterone fuelled Kumara, confronted Liton and the pair had to be separated when the Bangladesh opener gestured towards Kumara with his bat. What was said during the exchange remains a mystery but it’s likely that the match referee will want to find out more, with a punishment a real possibility to at least one of the protagonists.

Liton’s match got worse as he took the field, he’s a regular behind the stumps with the gloves on, but the discipline of catching in the deep requires different skills, which he clearly needs to improve on. He dropped Rajapakse and Asalanka in the deep, both straightforward catches, but he barely got his hands to the second chance. They were critical drops in the context of the game, as Rajapakse formed a match winning partnership with Asalanka, 86 runs off 52 balls, to decisively take the match away from Bangladesh. After enjoying a successful 2019 World Cup, Liton is among a clutch of players still searching for consistency and the ability to raise their game to the next level, his performance in Sharjah will do little to help his confidence.

The key factor behind Bangladesh’s loss was undoubtedly the mismanagement of bowling resources at vital times during Sri Lanka’s run chase. Things began in promising fashion with Nasum, playing for the first time in the tournament, bowling Perera in the first over. But neither Nasum, Mahedi or Saifuddin were able to exert any sustained control over the Sri Lankan batsman in the powerplay. And so of course it fell to Shakib, who else, to turn the game on its head with a double wicket breakthrough in his second over. Sri Lanka’s 4th wicket fell in the next over, Hasaranga offering a catch to midwicket off Saifuddin. At 79-4 off 9.4 overs, Sri Lanka were wobbling, but rather than administer a knockout blow, Bangladesh allowed their opponents to steady themselves and get back into the contest.

It was eerily similar to the previous Sunday when Scotland were also allowed to recover from 53-6 to eventually win the match. On this occasion, Shakib didn’t reappear until the 17th over and he was absent from the attack for 6 middle overs. By the time he was asked to bowl again, the damage had largely been done, a particularly expensive 16th over from Saifuddin had leaked 22 runs, as the Sri Lankan batters caught sight of the finish line.

It was a surprise to see Mahmudullah take the ball during those crucial middle overs, mainly as he has bowled so infrequently in the past few months, in all forms of the game. Similarly, Afif has enjoyed scant success, even as a part time bowler. Orthodox thinking clearly dictated the move; the off-break bowler turning the ball away from the left-handed batter, always being a favoured tactic. But during this juncture, common sense should have prevailed, the need to stay on top by utilising the best bowlers, Shakib and Mustafizur, was more important than keeping the batters in check with a formulaic plan. In any case, the lack of spin actually imparted on the ball by Mahmudullah and Afif, made the idea largely redundant. The decision making was in sync with a team not entirely used to winning big games and unwilling to risk anything in the quest for victory.

Bangladesh’s collective brain fade – the bowling changes were undoubtedly decided by the senior group of Shakib, Mushfiqur and Mahmudullah rather than just the captain – was epitomised by Nasum being asked to bowl the 19th over, with 9 runs still needed off 12 balls. The final scorecard shows both Mustifzur and Shakib not bowling their full quota, a clear indication that something went very wrong. The loss will not only damage Bangladesh’s confidence (it’s the second time a team has come from behind to beat them) but also makes progress beyond the Super 12 phase an uphill task. They will face a buoyant England in Abu Dhabi on Wednesday with little or no margin for error.