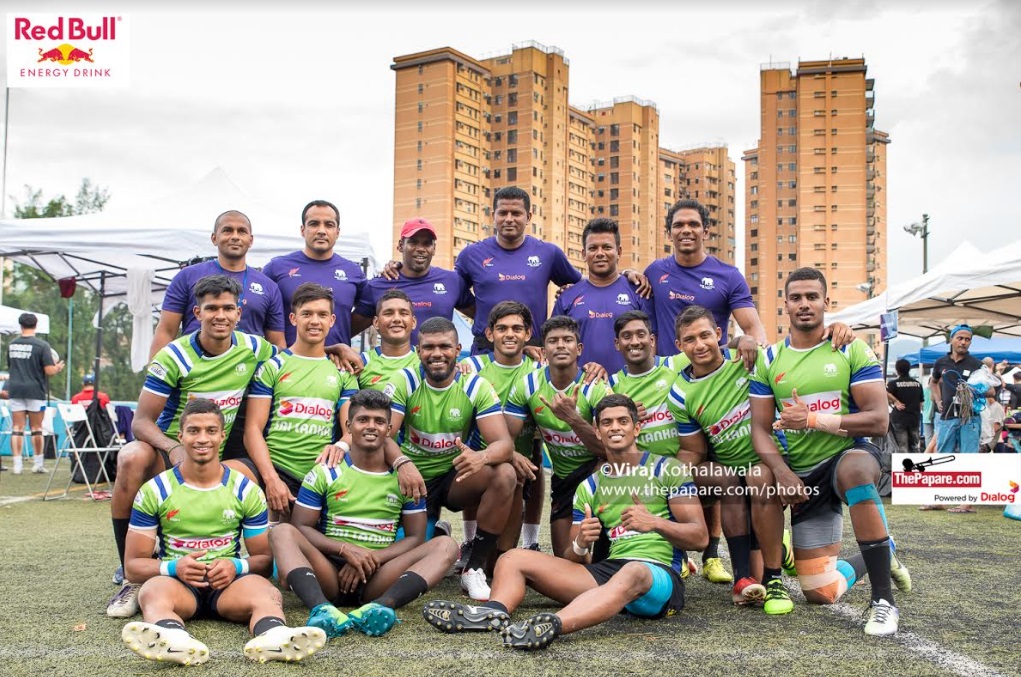 Sri Lanka defeated Singapore 26-12 with a clinical performance to finish 3rd at the Asia Under 20 Sevens series at Kings Park, Hong Kong.

The Tuskers enjoyed plenty of possesion in the game, however, they made too many errors and missed too many one-on-one tackles as Singapore side exposed their faults in the first half to take a surprising lead.

It was a nightmare start for the Tuskers, who conceded a quickfire try in the opening exchanges, falling 7-0 behind in the blink of an eye, but they only had themselves to blame as the try was courtesy of an error of their own making. Luca Mignot tried to get a static Singapore backline going with a long cut out pass drawing in the defense before Xavier raced in under the posts to give Singapore a dream start. Luca Mignot added the extras. (SL 00-07 SGP) 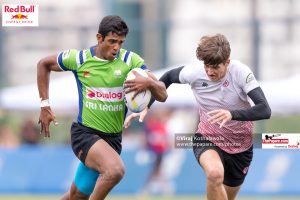 The Tuskers hit back in the fifth minute as Janidu Dilshan got the offload away for Gemunu Chethiya, who made a mini-break and released Harith Bandara on his inside for a clear run to the line, capping off a well-worked team try involving superb interplay between backs and forwards. Bandara converted to make the scores level. (SL 07-07 SGP)

Singapore had an instant response as the danger man Luca Mignot did excellent work in managing to find space out wide to Xavier before cutting back inside to collect the offload running in to the left corner for his brace. He failed to add the extras of his own try as the hosts took a 12-07 lead into the interval.

Sri Lanka came out for the second-half looking to apply more pressure and that they did on the 8th minute, from a lovely set-piece move that started inside their red zone. Naveen Henakankanamge put Janidu Dilshan through and he raced over on the right wing for a superb finish weaving way through the middle. This time Chathura Senevirathne made no mistake with the kick as Sri Lanka went into the lead. (SL 14-12 SGP) 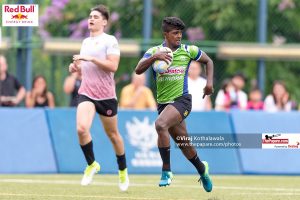 Singapore seemed to recover from their difficult start to the second half and began to build some pressure. But Harith Bandara’s run and pass off the back of the scrum to Gemunu Chethiya allowed Awishka Lee to finish off a move he started shattering all the initial pressure that was built by Singapore. Janidu Dilshan added the extras to extend the lead. (SL 21-12 SGP)

Dinuk Amerasinghe put the game out of reach with the Tuskers’ fourth try when he bashed over from close range after a good offload from substitute Randy Silva. Randy failed to add the extras to the try he created. (SL 26-12 SGP)

South Korea continued with their impressive form when they claimed a deserved 22-17 win over Sri Lanka to advance into the Cup finals of the Asia U20 Sevens series at King’s Park, Hong Kong.

The game was very scrappy, in part due to the torrential rain, with errors aplenty but South Korea ran out winners in terrible conditions. 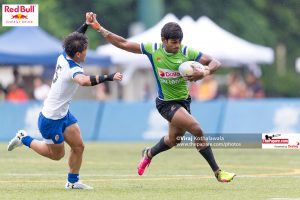 Sri Lanka were fast out of the blocks and raced into a 12-0 lead inside the opening few minutes. The Tuskers made a terrific start and after taking the ball through phases, they opened the scoring in the 1st minute when captain Naveen Henakankanamage crossed for the opening try. Chathura Senevirathne’s conversion fell astray. (SK 00-05 SL)

Soon after, Sri Lanka scored the second try when they opted for the scrum after a knock-on at the restart. The ball was switched to the blindside from the set-piece, where the Korean sweeper was in a one-on-one situation. He was guilty of rushing up too quickly on defense, allowing Gemunu Chethiya to wriggle his way free and offload to Awishka Lee to dot down in the left-hand corner before the scrambled defense could get to him. Harith Bandara made no mistake with the conversion this time around. (SK 00-12 SL)

South Korea replied immediately and using their big men, the ball was shifted from left to right where Gyeongsu Kim made the clean break, thanks to non-existent defending, before spinning the long pass out wide for the big Hyeonseong Shin, who had an easy finish on the overlap. Kang converted for a 12-7 cut back in the deficit. (SK 07-12 SL)

The dual playmaking axis of Gemunu Chethiya and Janidu Dilshan were causing several problems for the Koreans and the latter’s intelligent cross-kick after spotting space created a chance for Chethiya to scamper over for the third Sri Lankan try. Harith Bandara hit the upright to be unluckily denied of the conversion. (SK 07-17 SL)

The Referee brought the game to lemons at 17-7 with the Junior Tuskers in the lead.

The second half started precariously with both sides battling to gain the ascendancy.

South Korea eventually got the rub of the green in the 8th minute when they launched a flowing move and after taking the ball through numerous phases, Geon Lee offloaded to Hweewoong Kim who crossed for a deserved try. With Kang’s conversion straying, Korea made it a 5-point game. (SK 12-17 SL) 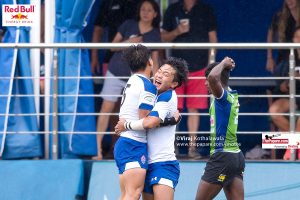 Territory was very much with Sri Lanka leading up to the 10th minute mark but crucially the South Koreans avoided leaking another score as they weathered the storm. That ultimately came back to haunt the Sri Lankans as the Koreans took their chance when it came. Hweewoong Kim was again involved after a Seungjae Ko carry found replacement Seongdeok Choi, who made it 17-all. The missed conversion led the game to extra time, sudden death. Sliding further Thulaib Hassen was shown a yellow card as Sri Lanka were made to play with 6 men. (SK 17-17 SL)

It didn’t take long before the Koreans were camped deep inside Sri Lanka’s territory again in extra time as they continued to string the phases together and heap pressure. With seemingly no way through, it took a little bit of ingenuity with the delayed pass from Gyeongsu Kang to unlock the Sri Lankan defence and set loose the big Hweewoong Kim through the gap and over the whitewash for the score as Korea won the semi-final. (SK 22-17 SL)

Sri Lanka got the job done but were made to graft for their 22-12 win over Singapore in their final group stage match of the Asia U20 Rugby sevens in King’s Park Hong Kong.

In a tough and uncompromising encounter, the two sides went hammer and tongs at each other in a bid to secure victory, but the Junior Tuskers finished stronger and eventually outscored their unbeaten group opponents four tries to two. 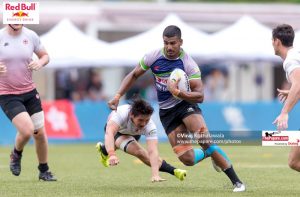 The result means Sri Lanka will move into the top position in pool B, remaining unbeaten with victories against China, Chinese Taipei and now Singapore – while Singapore, who were in first place before the start of the game, are now in second position.

Sri Lanka drew first blood in the first minute after a Awishka Lee attack close to the halfway line went awry. This, after the restart stabbed deep into Tusker territory as Janidu Dilshan neatly collected the loose ball pouncing on the scrambling defense. However, Janidu had the likes and speeds of his captain Naveen Henakankanamage on his shoulder who eventually let loose Awishka Lee to race away and dive over under the posts. Harith Bandara added the extras with ease. (SL 07-00 SGP)

Singapore did not take long to reply, two minutes later action crossed territories after a flowing move in which Singapore launched a counter attack from inside their half. Luca Mignot made a fine break down the right-hand touchline before being illegally brought down resulting a penalty, however he did well to offload to Bao Yuan who stepped past Harith Bandara before dotting down. Mignot failed to add the extras (SL 07-05 SGP)

Sri Lanka upped the ante on attack and spent large parts of the next 5 minutes camped inside the Singapore half. Heshan Jansen cantered in for their opening try after running onto a pass from Naveen Henakanakanamge deep inside the Singapore red zone. Chathura Senevirathne failed to add the extras from the left corner. (SL 12-05 SGP)

Both sides continued to attack as the half progressed but could not score further points during that period and Sri Lanka held a 12-5 lead at the interval.

The Tusker’s made the better start to the second half and two tries in quick succession during the early stages of the half proved decisive in the end. Naveen Henakankanamage finally got his act together when he scored a fantastic individual try. Janidu Dilshan made the break before a series of short passes and offloads between backs and forwards saw the ball eventually arrive in Naveen’s hands, the winger showing impressive strength to haul a couple of defenders with him over the line Chathura Senevirathne failed to add the extras as Sri Lanka made it a two try cushion. (SL 17-05 SGP) 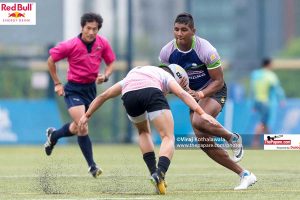 With around two minutes left on the clock, the Junior Tuskers were rewarded for a fantastic passage of play with their fourth try. After excellent work by Theekshana Dasanayake and Dinuk Amerasinghe at the breakdown securing the turnover, Heshan Jansen spun the pass out right to Gemunu Chethiya, who made an incisive break and did well to suck in the defense and throw in a no-look pass to Janidu Dilshan, before showing good upper body strength to power his way over the line despite the attention of Singapore defenders on his tail. (SL 22-05 SGP)

With thirty seconds to go, Mignot held the ball up well, before playing a pop pass for Ethan Yeun who ran the perfect line to break through and dot down for his second. (SL 22-12 SGP)

But it was only a consolation try, as Sri Lanka went onto remain unbeaten and will meet South Korea in the semifinals of the tournament later today.

So foul and fair a day for the Junior Tuskers