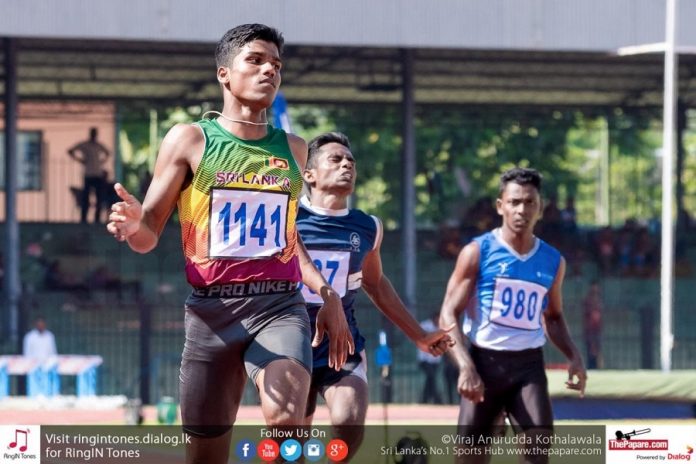 The annual meet is considered a bridging event between the School and National level with aspiring athletes eagerly taking part in the competition. The competitions are held in two age categories in Under 20 and over 20 with the upper age limit being 28 years. Also, another unique feature of the meet is that a winner of a competition cannot take part in the same event next year and must skip a year to be eligible to compete.

Aruna Darshana, Sri Lanka’s ace quarter miler who is representing the Matale District at the meet, entered the NYSF record books as he managed to run a new record time in the Under 20 Men’s 200m breaking the record held by S Pererea of 22.16secs. Aruna clocked a record time of 21.33secs despite the soggy underfoot conditions while Pasindu Kodikara who has being Aruna’s closest and main competition, was again promising as he also managed to better the previous record clocking 22.13secs representing the Kurunegala District. The gulf between the top two runners and the others were evident with the third placed Suraj Kavinda of Kalutara District clocking 22.54secs more than a minute behind Aruna.

In the Under 20 Boy’s High Jump, Tharindu Dasun of Galle created a new meet record clearing a height of 2.12m. He bettered the previous record of 2.11m held by R A T O Karunarathne of Urban Youth since 2013. P S T Fernando of Puttalum and D M P D Kaushalya of Monaragala were placed 2nd and 3rd respectively with both clearing 1.95m

The final meet record of the day came in the Boy’s Under 20 800m. Isuru Lakshan representing Puttalam District raced to a new meet record time in the heat of the event clocking 1:55.20secs,  bettering the previous record held by C Kushantha of Badulla District. However, in the final Lakshan ran a much slower time owing to the heavy downpour and the soggy underfoot conditions and only managed to clock 1:59.46secs. C  Aravindan of Badulla District who has also risen to the limelight as one of the leading young 800m runners was placed second clocking 2:00.39secs while Sasidu Deshan of Gampaha was placed third 2:01.16 secs.