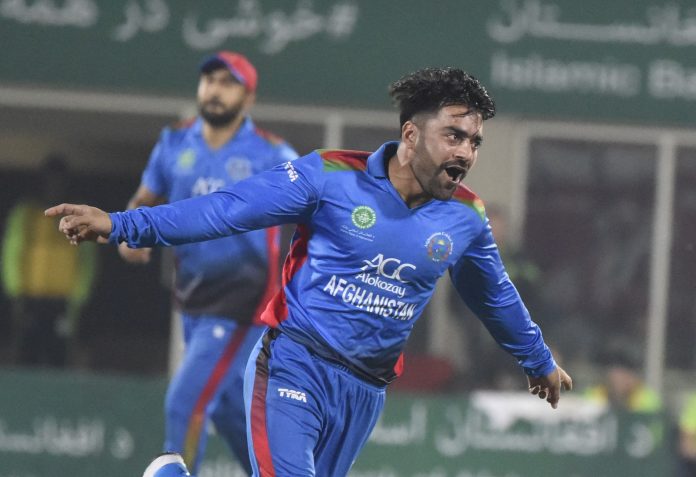 Leg-spinner takes four wickets in as many balls en route to his second five-wicket haul in the T20 format.

The all-round contribution of Nabi – whose explosive 36-ball 81, economical work in the middle overs with the ball, and stunning boundary catch at long-on – deservedly won him the Player of the Match award.

But while his pedigree as one of the world’s most consistent short-format all-rounders was once more in evidence, the headlines will go again to Rashid, whose four wickets in four balls en route to a second five-wicket haul in the format provided the signature moment of a high-class contest.

They weren’t the only standout performers. Kevin O’Brien’s brilliance with the bat put the result in the balance for much of this pulsating context.

The Irish may have fallen 32 runs short, as the task of hauling in Afghanistan’s immense 210-7 proved just too much, but when O’Brien was in full cry anything seemed possible.

He was dominant from the start, pulling Zia Ur Rehman over mid-wicket and repeating the shot two balls later, this time along the ground. When O’Brien muscled the first ball of the sixth over for a maximum – one of 16 struck in the match – Ireland were rattling along at 11-per-over, for the loss of only Paul Stirling.

Andy Balbirnie had joined O’Brien at the fall of Stirling’s wicket and for much of the innings the pair were irresistible, sharing a 96-run partnership before, in the 14th over, a well-disguised Zia Ur Rehman slower ball slid through Balbirnie’s checked drive to open the door for Afghanistan.

When a stunning direct hit at backward point by Najibullah Zadran to remove the dangerous Stuart Thompson swung the match in their favour, thereafter the stage was set for Rashid.

On 74 from 47 balls and with Ireland still in touch with the rate, O’Brien went to clatter the leg-spinner through the offside but only succeeded in offering a thin edge to the keeper, Shafiqullah Shafaq, to take a smart low catch.

It was a somewhat anti-climactic end to a classic innings by the Irish opener and with his departure went Ireland’s hopes of hauling in a famous victory. Rashid had broken the back of Ireland’s reply, and he duly claimed his first T20I hat-trick with the first three deliveries of his third over, the 18th of the match.

Nabi’s intervention with the bat earlier in the piece was critical. He joined the fray with Afghanistan having stalled following another lively start. From 46-0 after four overs, Ireland restricted the top order thereafter, with Boyd Rankin cranking it up to remove the destroyers from the second match, Usman Ghani and Hazrat Zazai, in the same over.

Initially in partnership with Asghar Afghan, Nabi soon set about the Irish seam attack. His fifty came from just 28 balls but it was Nabi’s subsequent assault that took Afghanistan up towards the 200-mark, with his next eight deliveries yielding 31 runs.

In the final analysis, Ireland’s over-reliance on a seam attack was found wanting in conditions a world away from Malahide, as Nabi’s muscular brilliance and penchant for standing back in his crease and elevating good-length balls in an arc from cover to mid-wicket took the game away from the tourists.

The all-rounder’s assault gave Rashid plenty of runs to play with. From such a position he rarely disappoints.

Video – A Test series win in South Africa equals to...