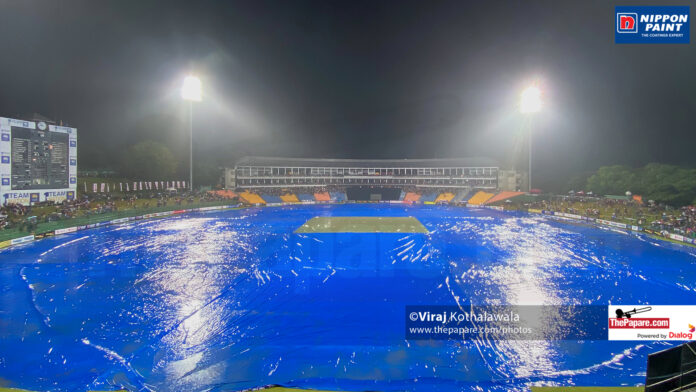 The second ODI match between Sri Lanka and Afghanistan was called off due to persistent rain in Pallekelle on Sunday.

Only 2.4 overs were possible in Sri Lanka’s chase of 228 as persistent rain brought a premature end to the game. The officials decided to call off the game at around 8.56pm local time.

Both teams, Sri Lanka and Afghanisthan shared five points each in the ICC ODI Super League while the visitors, Afghanistan continues to hold onto the 1-0 lead gained after the 60-run victory in the first game. The third and final game of the series will be worked off at the same venue on Wednesday.

After opting to bat first, Afghanistan failed to convert a healthy start given by Rahmanullah Gurbaz and Rahmat Shah, who both made fifties as they lost their last 9 wickets for less than just 93 runs. They were bundled out for 228 in the 49th over by a spirited Sri Lankan bowling attack.

Previous game’s centurion, Ibrahim Zadran survived on the very first ball he faced due to an inside edge after umpire Ravindra Wimalasiri adjudge him LBW off Kasun Rajitha. However, his luck was short lived as he chopped on one off Lahiru Kumara’s delivery to give an early breakthrough for the hosts with the score on 22.

Rahmanullah Gurbaz and Rahmat Shah continued their good form with a solid partnership for the 2nd wicket. They added 113 runs off 121 balls to set a solid platform for the visitors. Despite racking up runs at a healthy rate, Sri Lanka did not give away many loose deliveries.

Gurbaz, once he started to struggle with cramps, found Maheesh Theekshana at deep long-off as part-time spinner Dhananjaya De Silva got an important breakthrough.

Theekshana kept things tight and as a reward for his economical bowling, well-set Shah played across the line and was trapped LBW as Sri Lanka started their comeback with the ball taking two wickets inside two overs.

Najibullah Zadran and Gulbadin Naib did not trouble the scores much as Theekshana and Hasaranga kept attacking the stumps as Afghanistan were soon found 5 down for 165 after being in a strong position at 135 for 1 at one stage.

Mohammad Nabi held the lower middle order and looked to combine with skipper Hashmathullah Shahidi to revive the Afghan innings. But, against the run of play, Dhananjaya Lakshan’s direct hit found Shahidi short of his crease as Sri Lanka further ceased control of the game.

Kasun Rajitha, who had a brilliant opening spell, bowled well in the death to restrict Afghanistan to 228 He ended with impressive figures of 3 for 31.