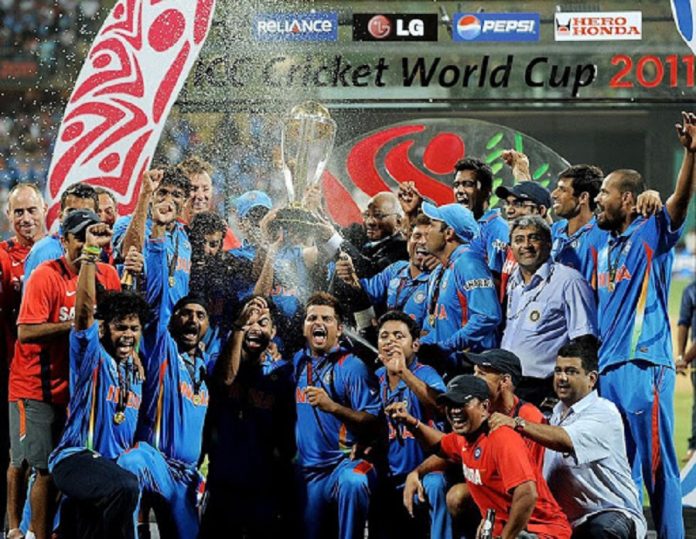 It was India’s moment of glory. Twenty eight years after earning the crown for the first time, the dazzling team led by MS Dhoni secured the title for the second time. Not only had they marked the end of Australian World Cup domination, they themselves deprived Australia of another successive title before causing heartbreak for the Sri Lankans in the final. The whopping local hype along with frenetic media coverage surrounded the star team that became the first to lift the trophy on home soil.

The World Cup was moved to the subcontinent after 16 years and was jointly hosted by India, Sri Lanka and Bangladesh. Although Pakistan was scheduled to be a co-host, the attack on the Sri Lankan team at Lahore in 2009 compelled the ICC to revoke the decision. Formats were altered from 2007 as it revealed the dangers of much fancied teams making early exits, where a single upset could risk their chances of reaching the next round. The 14 teams were in two groups while 49 games, in 13 venues were held to reckon the ultimate winner. The DRS made its debut in this edition.

The opening contest took place between co-hosts India and Bangladesh at Mirpur on 19th February. India posted a mammoth 370/4 which was highlighted by the terrific 175 that came from opener Virender Sehwag’s willow. His breathtaking innings which took a mere 140 balls, was supported by youngster Virat Kohli’s unbeaten ton. A commendable fight back by Bangladesh saw them reaching 283/9 in their 50 overs.

When India took on England at Bangalore, it was expected to be a closely fought contest. Taking first lease of the wicket, Sachin Tendulkar made a vintage 120 as India amassed 338. The staunch reply saw the English skipper Andrew Strauss forcing the Indians to taste their own medicine. With a concrete 170-run stand with a steady Ian Bell, Strauss flayed his way to a splendid 158 off 145 balls. But England’s decision to take the powerplay at 281/2 backfired when both perished to Zaheer Khan in the same over and the match was again hanging in the balance. India, exploiting the situation, sent Paul Collingwood and Matt Prior back too, leaving England requiring 50 in 5 overs. As Graeme Swann, Tim Bresnan and Ajmal Shahzad took charge, English hopes were revived. Needing 29, two sixes were muscled off the penultimate over bowled bowled by Piyush Chawla. Still with 14 to get, Munaf Patel’s final over conceded 13 runs, ending the breathless encounter in a thrilling dead heat.

An Irish miracle, an English nightmare

For a person who would hardly believes in miracles, the Chinnaswamy hosted another spectacle, three days after the stalemate. This time too it was featured England, but they were up against the giant-killers, Ireland. It was seemingly a mismatch, as England mounted 327/8 courtesy of Jonathan Trott, Kevin Pietersen and Ian Bell’s half tons.

Adding insult to injury, the Irish chase was impeded at 111/5 down halfway, but a miracle was about to unveil in the next one and a half hours. Out came Kevin O’Brien, the ‘pink headed’ sturdy figure from Dublin to turn the game on its head. With the powerplay on, he began to launch his ballistics. Despite his injured knee, O’Brien and Alex Cusack stole 62 runs off the powerplay. The offensive continued as a stunned and hapless English side saw O’Brien who took 30 balls to reach his 50, needing only another 20 deliveries to reach a sublime century, the fastest in World Cup history. As O’Brien’s fireworks mesmerized the clamorous crowd, the duo annexed a miraculous 162 in just 17 overs for the 6th wicket, renewing Irish hopes of causing another upset. After Cusack departed for 47, O’Brien continued his rampage, helping them to reach 300 in the 46th over.  With thirteen 4s and six maximums, by the time O’Brien departed for 113, England had already lost the plot. John Mooney and Trent Johnston eventually secured the phenomenal victory in the last over. It was the highest successful run-chase in World Cup history. A sensational win for Ireland, and for England, a bitter pill to swallow.

On March 6th, England played South Africa in Chennai. Batting first, England were bowled out for a paltry 171 with Imran Tahir and Robin Peterson taking charge with their agile spin, claiming 7 wickets between them. At one point the South Africans were cruising at 124/3 until a sudden breakthrough by James Anderson, dismissed AB de Villiers before Faf du Plessis was run-out by Bell. Anderson’s next over rattled JP Duminy’s stumps while Robin Peterson was forced to the exit by Michael Yardy. Suddenly it was 127/7 with Dale Steyn and Morne van Wyk battling their way out of the situation. The pair grappled with a 33-run stand until van Wyk’s edge off Bresnan clattered his stumps. Stuart Broad then took over from Bresnan to capture the final two wickets, causing an inexplicable 6-run loss for South Africa.

The shattering loss however was avenged a week later with an epic run-chase against the hosts India at Nagpur. India’s 296 was spearheaded by Tendulkar’s classic 111 that came in 101 balls. His opening stand with Virender Sehwag produced 142 runs in 17 overs. South Africa’s strong reply saw Hashim Amla scoring a steady 61 while Jacques Kallis’ 69 set the tone for another thriller. After Kallis was run-out, de Villiers took charge with a rapid 52 in 39 deliveries. South Africa needed 73 off the final ten overs when du Plessis and Johan Botha commenced the operation. 23 priceless runs were added by Botha in 15 balls and after he was dismissed by Munaf Patel, Peterson arrived at the middle to finish it off. With a well composed du Plessis at one end, he thumped two fours and a maximum to see them home in the final over. An exciting win for the South Africans in perhaps one of the best World Cup run chases.

At the end of the group stage games, no unbeaten side stood at the tournament. The Australians, who were enjoying a sequence of a record 34 unbeaten games, were finally subdued by Pakistan in Colombo. The Pakistanis themselves were opponents in Australia’s last defeat in a World Cup game back in 1999. Pakistan, despite their loss to New Zealand, led Group A, followed by Sri Lanka, Australia and New Zealand. Group B was topped by South Africa while India, England and West Indies also sealed quarterfinal berths.

Rise of the Asians

The three subcontinent teams left in the tournament, India, Pakistan and Sri Lanka exploited ideal conditions to breeze their way to the semi-finals. At Mirpur, Pakistan crushed West Indies by 10 wickets. Shahid Afridi’s spin snatched 4 for 30 as they bowled out the Windies for 112 which was easily chased down.

Ahmedabad saw defending champions Australia exit at the hands of India. A competitive 260 was reached with a timeless century by their erudite skipper Ricky Ponting. The Indians were 187/5 at one point when Yuvraj Singh and Suresh Raina came in to propel them to victory with two overs to spare.

New Zealand became the only non-Asian team to book their place in the semi-final when they beat South Africa by 49 runs at Mirpur. Batting first, New Zealand made a modest 221/8 with Jesse Ryder top scoring with 83. At 108/2, the South Africans were in the driving seat, when things took a turn. Jacob Oram’s catch at mid-wicket dismissed Kallis for 47 while a suicidal run-out sent AB de Villiers back to the pavilion. Oram, who was dropped in the previous game, then stepped in to claim 3 wickets as South Africa’s final 8 wickets crashed for a mere 64 runs. Oram finished with 4 for 39, becoming a protagonist in yet another chapter in South Africa’s bizzare World Cup tales.

England’s roller-coaster ride came to an end when Sri Lanka battered them by 10 wickets at Colombo. Batting first, England managed to get 229/6. The target was reached in 39.3 overs with openers TM Dilshan and Upul Tharanga doing the needful with a commanding batting display. Tharanga and Dilshan scored 102 and 108 respectively while the pair cropped 25 boundaries from the English attack.

On 29th March, Sri Lanka met New Zealand in a 2007 semi-final rematch. At a packed RPS, the option to bat first was however countered by tight Sri Lankan bowling. Muttiah Muralitharan, playing in his final home game, trapped the top scorer Scott Styris for 57 in his last ball. New Zealand’s 217 was met with a strong reply as Dilshan’s 73 took Sri Lanka to 160/1. But a shaky middle order gave a short scare before Thilan Samaraweera and Angelo Mathews saw them home eventually.

A mouthwatering encounter between India and Pakistan took place on the following day. Not only did it pour in thousands of ardent fans to Mohali, but also attracted an estimated 1 billion viewers around the globe. India batted first, scoring 260/9 with Tendulkar’s masterclass, yielding 85 runs. Wahab Riaz took 5 for 46. Pakistan’s reply was hindered by regular wickets as their batsmen failed to capitalize after having a good start. Despite Misbah’s half ton, Pakistan were all out for 231, giving the Indians a 29-run win.

A Century in vain, India reign

India and Sri Lanka were appearing in the first ever all-Asian World Cup final, with a title apiece and losing the remainder to Australia, both teams were eyeing their second title. The first half of the show was stolen by Mahela Jayawardene’s stylish century. With his partner Kumar Sangakkara at the other end, Mahela’s delightful strokes stunned the local presence at the Wankhede. Moreover, under intense pressure it was well maneuvered, taking 49 balls for his fifty and just 39 more for an elegant century. He became only the sixth player to score a century in a World Cup final while Thisara Perera and Nuwan Kulasekara’s late cameos took Sri Lanka to 274/6.

The home team’s reply was restrained early when both openers Sehwag and Tendulkar were sent back by Lasith Malinga. But it proved to be the certain end of Sri Lanka’s grip on the game as Gautam Gambhir teamed up with Kohli and later the skipper MS to take the game away from the Lions. The 109-run stand saw Gambhir scoring 97. After his departure, Dhoni was joined by Yuvraj to finish the game. Slamming 91 in 79 balls, the skipper himself scored the winning runs with a six over long on. It was a vivacious 6-wicket win for the Indians who lifted the trophy after 28 years, forcing the Sri Lankans to settle for silver in yet another World Cup final.