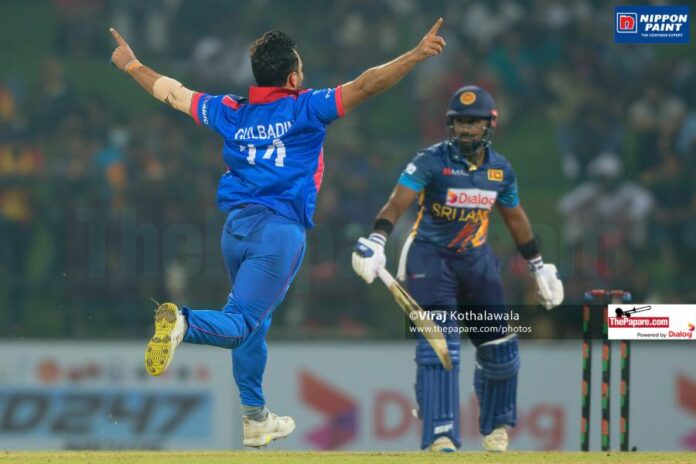 20-year-old Ibrahim Zadran scored his second ODI century as Afghanistan defeated Sri Lanka by 60 runs in the first ODI match of the three-match series in Pallekelle on Friday.

Zadran was ably supported by his opening partner Rahmunullah Gurbaz and one-drop batter Rahmat Shah, who made 53 and 52 respectively. Zadran’s brilliant 106 came off 120 deliveries. He scored 11 elegant fours. After opting to bat first, Afghanistan made 294 for the loss of 8 wickets. In reply, Sri Lanka’s innings lasted only 38 overs as they were all bundled out for just 234.

For the hosts, Pathum Nissanka top scored with a fine 85 whilst Wanindu Hasaranga put up a solid all-round effort of quick-fire 66 with the bat and picked up 2 wickets with the ball.

In the afternoon, Gurbaz and Zadran scored 60 in the first powerplay after the former were dropped on 13 by Dhananjaya De Silva at first slip. Gurbaz was the aggressor before he was caught plumb in front by Hasaranga. They added 84 runs for the first wicket.

Zadran and vice-captain Shah took time to up the ante in the innings as the Lankan spinners stemmed the run-flow. However, they made 118 runs for the 2nd wicket before Lahiru Kumara, the most impressive seamer for the hosts edged out Shah.

Ibrahim Zadran was then joined by hard-hitting Najibullah Zadran as the Afghans looked to maximize excellent batting conditions. Ibrahim fell soon after reaching his hundred. However, Najibullah Zadran made some lusty blows in the final 10 overs to take the Afghanistan score to an above par total. The visitors lost 6 wickets in that period whilst scoring 81 runs.

Dinesh Chandimal and Dhananjaya De Silva, both started off positively with some crisp, elegant boundaries – three each to keep up with the required run-rate but they were undone by the Afghan seamers Fazalhaq Farooqi and Gulbadin Naib.

Pathum Nissanka from the other end, continued his merry way, accumulating runs at a brisk pace. Charith Asalanka edged to the first slip, whilst skipper Dasun Shanaka holed out at deep square leg as Sri Lanka were suddenly 5 down for 137 runs.

Sri Lanka were always up with the required run-rate but lost too many wickets in regular intervals. Nissanka’s excellent innings came to an end in the 30th over when he chopped one onto the stumps. His brilliant 85 which came in just 83 balls had 10 fours.

Soon after Nissanka fell, Hasaranga put the pedal down and smashed the bowlers all around the park to keep Sri Lanka in the hunt. He reached his fourth half-century but soon ran out of partners as Afghanistan continued to take scalps.

This is the first bilateral series between these two countries. They have faced each other only in World Cups or Asia Cups before. The 3-match series is part of the ICC Cricket World Cup Super League as teams chase automatic qualification for the 50-over World Cup next year in India.

With this loss, Sri Lanka will still be on 62 points from 19 games in the 10th position, whilst Afghanistan have accumulated 110 points from 13 matches and they’re on the verge of direct qualification.

The second game will be played on the 27th of November at the same venue.