Home Features The Tango in Colombo 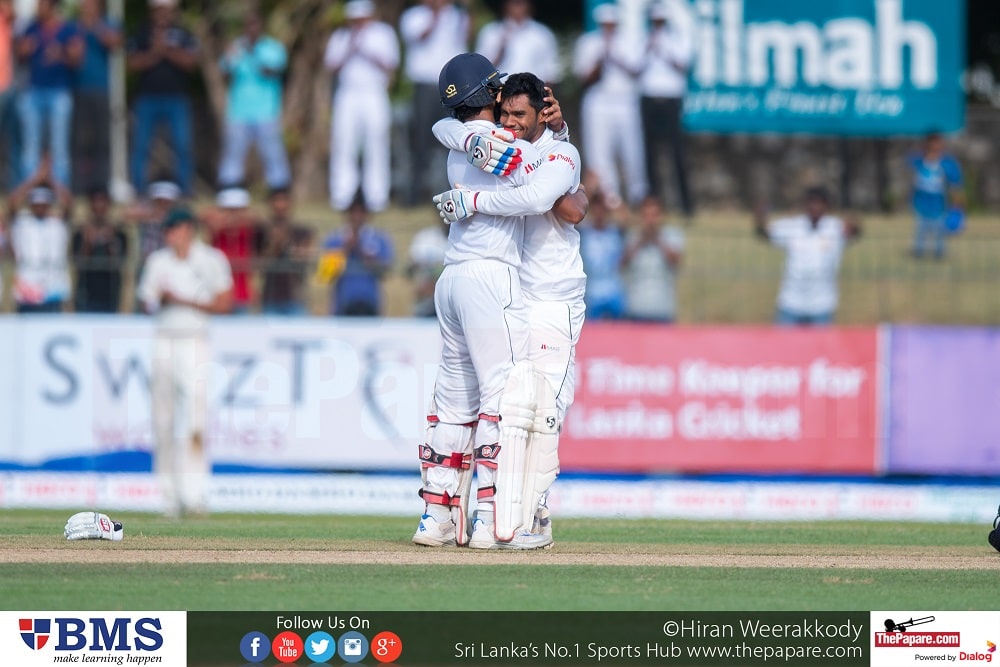 It is after lunch at the SSC in Colombo. Sri Lanka have been carpet bombed in the first session. They begin at 55-5. Dinesh Chandimal and Dhananjaya de Silva are trying to get Sri Lanka to something. Anything. On Twitter and online forums, Sri Lanka’s first innings blues are being highlighted. And rightfully so.

Chandimal is stretching, scratching and trying to sort out his game. He’s got 7 off 34 balls; unfamiliar territory for a batsman who likes to bat with gusto. The third over after lunch is from Mitchell Starc. Australia’s go-to bowler this series. He has 3 for 10 off 8 overs. He is searching for his fourth and Australia’s sixth to break into the tail and end another hot day in the office as quickly as possible.

Chandimal edges the fifth ball of the over for four through gully. It’s a wide ball outside his off stump. He doesn’t need to play it but he plonks his foot down and chases the wide ball. He does the same in the 6th ball. An even wider ball. Mitch Marsh fails to hang on to a tough chance. Chandimal looks lost. These are shots he likes to play, this is not the time to play them but he plays them anyway. He is riding his luck.

Starc’s next ball is to de Silva. A short ball, probably through frustration for having Chandimal dropped in the last over. It’s a 145 kmph ball. De Silva barely moves as he pats the ball executing a pull shot to fine leg.

Two balls later the ball is fuller, de Silva meets it with his wrists. He barely seems to touch the ball. But it is racing to the fence. It is sublime timing. De Silva pulls out this shot several times during the day. Each time is mesmerizingly easy on the eyes.

Another two balls later De Silva is straight driving Starc with ease past mid-off with that youthful smile on his face.

Two overs of Starc to two players. It’s like we are watching two different matches.

Chandimal has 6 Test hundreds to his name. His slowest one was at a strike rate of 50. In his two best innings, the 161 not out against India at Galle in 2015, saw his 100 come up at a run a ball. A few months ago, at Chester-le-Street, his century came at a strike rate of close to 60. Both these centuries also came in the 3rd innings of the match. In situations where Sri Lanka were seemingly completely out of the game.

Against India at Galle, Sri Lanka was facing a 192 run first innings deficit and were 3 for 5. In England, Sri Lanka were 397 behind and being asked to follow on. In both these games, Chandimal could play his free-flowing game that got him into the side in the first place. With Sri Lanka completely backed into a corner Chandimal found his voice.

Today was different. Sri Lanka had won the toss and decided to bat. It was by no stretch a 26 for 5 wicket. But here they were looking set to repeat another horrific first innings. Chandimal couldn’t afford to chase wide balls and have a go. Well, he tried really hard not to anyway. No one is perfect. Today Chandimal batted dirty. His strike rate was non-existent. His 204 ball homage to the great stoic efforts included only 43 scoring shots. He made Nathan Lyon look like a demi-god bowling fire at him.

No one doubts Chandimal is a high-class talent. But there has always been roaring debate inside his head. Should he be the free-flowing batsman he was in his U-19 days? Or should be bat according to the teams needs and match situation? Or is attacking the best form of defense? Is his natural game at all times the best solution? Then there were the rumours that coaches had gotten in his head about technique.

Today Chandimal looked like he fought all those demons every single ball. There were loose shots, tentative prods and lucky escapes as he battled his way to the most unChandimal half century of his career. But he helped take Sri Lanka from 26 for 5 in the 17th over to the close in an epic 188 partnership with De Silva. Whether he defeated the demons, only he will know but in the grand scheme of things, this might be one of the most important innings he has ever played. Not just for Sri Lanka’s sake but for his own.

Dhananjaya De Silva has batted in five innings in his Test career so far. And in truth, he has looked like he could have scored something substantial in each instance had he not thrown it away. In each of those innings, beautifully personified in the extended display he put on today, his batting has been characterized by soft hands, those tangible extra seconds he has to play the ball and his manor from heaven timing.

But between the full repertoire of strokes and all that timing, his composure at the crease is what has stood out every time he took guard. De Silva’s batting is so uncomplicated, so organised and repeatable that every ball sort of melds into one. There are no idiosyncratic ants in his pants movements before he takes guard. Just a simple tightening of the gloves and bat on shoulder, bat on the ground, ready to receive the ball.

Even in his shot making, there is no undue flourishes or extravagance. It is just pure batting. Every ball is just played on its merit. Forward when it is full, back when it’s short. With hands so soft that it feels like that his bat is apologizing to the ball for making contact with it.

Then on 47 he lofts Mitch Marsh over the off side to reach his fifty. For a minute you are left wondering whether that was some trick of the eye. Because a few seconds later, De Silva is tightening his gloves, bat on shoulder, taking guard.

On 83, Lyon gets one to jump at De Silva, he keeps it out calmly and angles it down just out of reach of the short leg. The next ball is the same line and length, De Silva just turns it away past the same short leg for a single. It’s as if the ball before never even existed in his mind. In the next over John Holland is trying to bowl over the wicket outside his leg stump. He bats up to the first two. Next ball he’s down the wicket and whips him out of the foot-marks for four. The next ball he pads it away again.

His hundred came off a poor ball from Steven Smith. And that smile he wears on his face got wider. There may have been a few tears too. But he had moved through his first Test 90s like he had batted all day. If there were any butterflies they were impossible to notice inside the zen aura that surrounded him.

Sri Lanka is not safe in this Test match yet. And while they may be chasing a whitewash this recovery and the manner in which they’ve done it will be more pleasing for Mathews and Sri Lanka than anything else.  Chandimal battled his own demons and managed to find a way through his valley of haunts. de Silva reached his potential in just his fifth attempt. And two batsmen have contributed to a partnership that signals another arrow in the quiver of a side that has found its feet