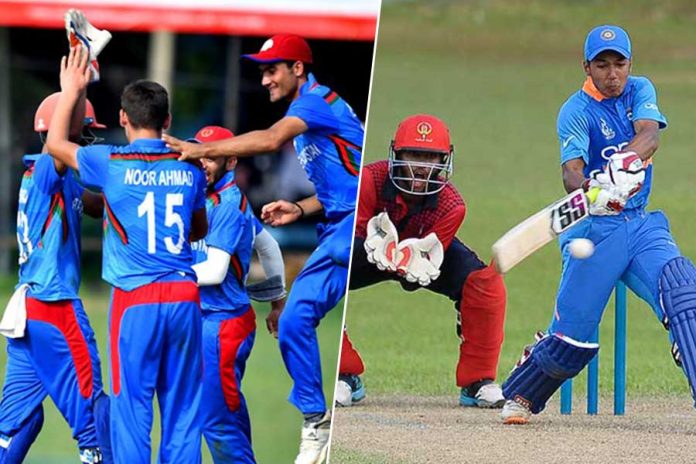 U19 Asia Cup 2019 kick-started today, 5th September, in Colombo amidst the troubles from weather. Afghanistan U19s defeated the much-fancied Pakistan U19s in the tournament opener while India won against Kuwait U19.

Afghanistan U19 vs Pakistan U19

Early morning showers permitted only 46 overs of cricket per side at P. Sara Oval. Pakistan skipper Rohail Nazir won the toss and elected to field first. Accordingly, Afghanistan got a composed start to their innings with captain Farhan Zakhil opening the batting with Sediqullah Atal. The pair put on a 42-run stand before a collapse.

Sediqullah Atal top-scored with 29 runs to his name while the number 3 batsman, Rahmanullah scored 27 runs.

Wickets fell at regular interviews as the Afghanistan U19 team settled for 162 runs for 9 wickets. Leg spinner Fahad Munir and Amir Ali bowled beautifully for Pakistan as the duo went back with 3 wickets each.

The battle between these neighbours got intense as the Pakistan U19 team started to look very ordinary with bat in hand. Wickets started stumbling right from the start as they succumbed for just 78 runs in the 20th over.

No batsman went past the 20-run mark as leg spinner Shafiqullah Ghafari picked up 3 wickets for 15 runs while Noor Ahmad, Abidullah Taniwal and Fazal Haque picked up 2 wickets each.

Unpredictable weather meant that the game could only get underway after 2 pm. India won the toss in the 23-overs per side match and elected to field first on a slow CCC wicket.

The boys from Kuwait posted a decent 110 runs against the giants in the region to start off their Asia Cup campaign. Meet Bhavsar scored 28 runs while Akash Singh and Purnank Tyagi claimed 3 wickets each.

Being the defending champions, India announced the start of their tournament loud and strong by bashing the minnows effortlessly with a 7-wicket win. Though they looked slow at the start they caught up with it and got past the line in 19.1 overs.

Arjun Azad smoked an unbeaten 60 to take his team to victory with ease. India scored 114 runs for the loss of 3 wickets in 19.1.