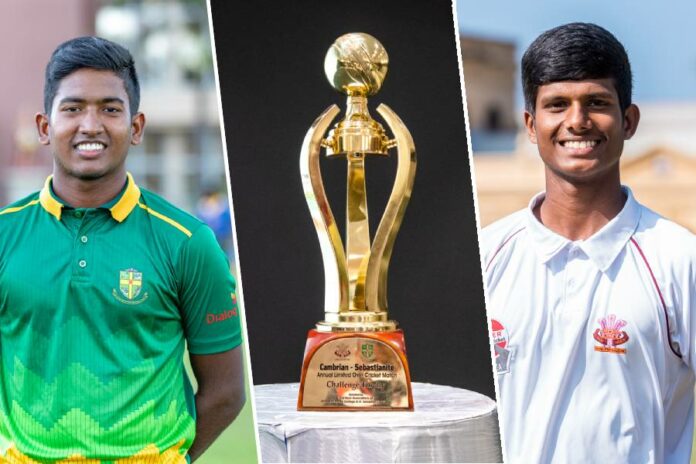 On the back of a shortened season, Prince of Wales vs St. Sebastian’s College come into the 71st Battle of the Golds fresh.

The Sebastianites are being led by the fourth-year coloursman, Sukitha Prasanna, who also does the glovework for the team. Prasanna is the second-highest run-getter of the side and brings in a heap of experience having been in the scene for a long time.

On the other end, it is the third-year coloursman, Dinura Fernando, who is in charge of the Prince of Wales team. The right-handed batter had a decent season last year having made 243 runs in his 7 outings.

The two teams will collide on the 14th and 15th of this month in their 71st two-day encounter while it will be followed by the one-day encounter, which is being played for the 36th time at De Soysa Stadium in Moratuwa.

>> All set for Prince of Wales-Sebastians battle

On the batting front, it is the elegant left-hander, Omesh Mendis, who leads the way for the Cambrians. Mendis has scored at an average of close to 50-runs a game as he ended the season with 389 runs to his name in 8 matches.

Along with Mendis, batters like Anupa Bandara (349 runs), Tharindu Amarasinghe (313 runs), Sumalka Fernando (272 runs), Pasindu Pathum (216 runs) and the skipper will join in to make POW a strong batting outfit.

Although it is comprised of many freshers, the bowling seems to be the stronger suit for the Cambrians given that they have a vast number of all-rounders who can offer you vital overs.

The chief wicket-taker for the Sebastianites, Achala Perea, a fresher, was an absolute surprise package for the opponent batters. The right-arm off-spinner’s wickets tally is rather impressive as he bagged 22 scalps in just 5 games last season.

The frontline leggie of the team, another fresher, Sumalka Fernando, stood second in the wicket-takers list with 18 wickets to his name.

These two will be their go-to bowlers on a fair De Soysa track while bowlers like Prince Fernando and Meshith de Silva could be of high value.

As mentioned above, it was a rather quiet season for the Sebastianites and it will be really tough to face this Cambrian bowling attack for this set of batters who come in without enough time at the centre during the season.

The highest run-maker, Savindu Rodrigo, scored 180 runs this season for the Sebs while the other two batters to pass the 100-run mark were Yashan Avishka who scored 120 runs, and the skipper Prasanna with 161 runs, all in 6 matches each.

Having said this, the numbers don’t necessarily depict the capabilities of these players. Players like Sukitha and Savindu could be dangerous on their day.

The bowling don’t matchup to their arch-rivals in terms of numbers. Crishane Perera and their experienced spinner Kalana Sandeepa were the major takers for the Green & Golds with 10 wickets each in 5 games.

The left-arm spinner Sandeepa has been among the most wicket-takers in previous schools cricket seasons and is vastly experienced. He will be key to the Sebastianites fight for glory.

The win tally of the two-day encounter stands at 6 to 3 in favour of the Cambrians while the Sebs take the pride of having more wins in the one-day encounter with the tally at 17 to 14.

The last time a result was produced in the Battle of the Golds was back in 2011 when Sanitha de Mel lead the Sebastianites to the big match title.

As the principal sponsor, Dialog Axiata has made arrangements to LIVE stream the Limited Overs match via thepapare.com, Dialog VIU mobile app and will also be shown LIVE on Dialog TV Channel 140.

Can the Cambrians take the trophy back to the Prince of Wales, will this inexperienced Sebastianites outfit be able to retain it?