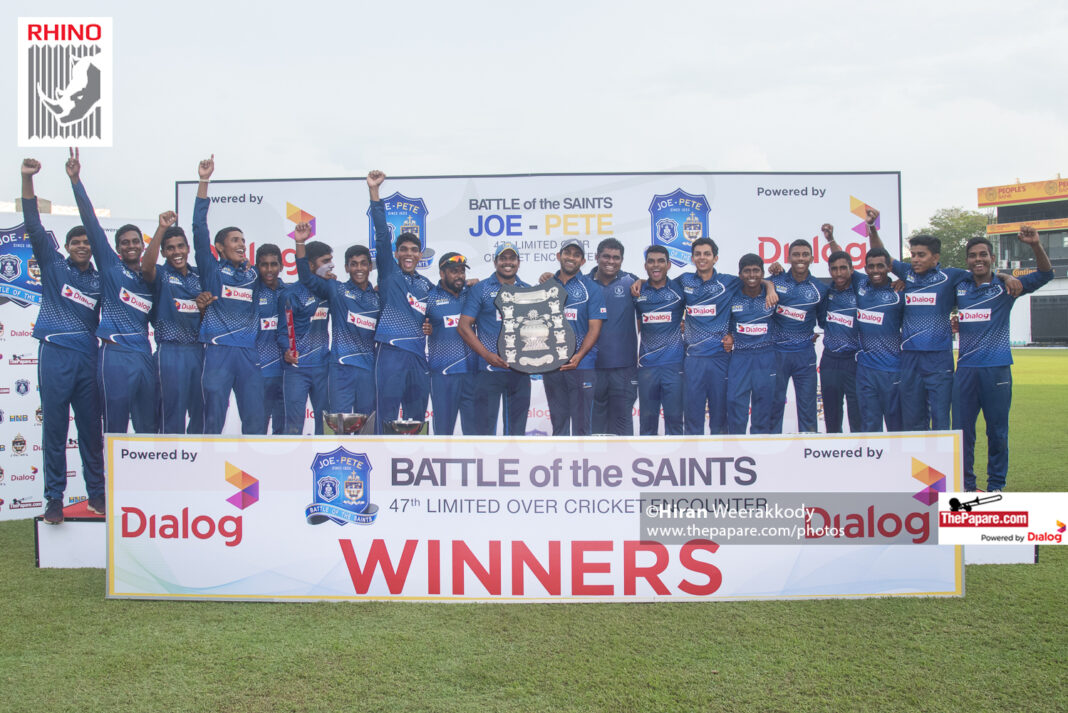 Off-spinner Amarasekara picked up a five-wicket haul as St. Peter’s were bowled out for 115 after Mithira Thenura and Hiran Jayasundara’s 101-run stand took St. Joseph’s to a match-winning total of 200 runs.

After St. Joseph’s opted to bat, Danal Hemananda gave the best possible start for St. Peter’s College with the ball. He got the first wicket of Yesith Rupasinghe, who flicked it straight to mid-wicket for a duck. Two balls later, fresher Hirun Kapurubandara was trapped plumb in front as the Josephians were two down for no run.

Skipper Sheran Fonseka and young Hiran Jayasundara commenced their rebuilding phase adding 36 runs for the 3rd wicket off 60 balls before the former was caught at extra-covers off Chamelkar De Silva in the 11th over.

Mithira Thenura and Hiran Jayasundara produced the best stand for the match – 101 runs in 163 balls to put St. Joseph’s in driving seat. Both the right-handers ran between the wickets quite well to unsettle the Peterites. Thenura made 52 off 89 balls with 3 fours before he became Chamelkar’s second wicket. Soon after Mithira’s wicket, Jayasundara fell while attempting a slog-sweep as St. Joseph’s were 5 down for 150 in the 40th over. Jayasundara played 101 deliveries for his 58.

Dinal Anuradha, coming in for the side in place of Sahan Dabare, held the Josephian late order with a fine 39-ball 30 as St. Joseph’s managed to post 200 on the board. Left-arm seamer Hemananda ended with impressive figures of 4 wickets for 35 runs during his 10-over spell.

Chasing 201 runs to win, St. Peter’s lost their opening batter Vishen Halambage for a duck and then the one-drop batter Lahiru Dawatage for 9 as seamer Deshan Senevirathne took the first two wickets. Nimuthu Gunawardene was caught and bowled by Yesith Rupasinghe as the Peterites were three down for 28.

Senior opening batter Shenal Botheju batted for 73 minutes as he compiled a knock of 48 off 59 balls but his dismissal off Amarasekara in the 17th over, opened up the brittle Peterite middle order, who crumbled under pressure. Skipper Nipunaka Fonsekara tried his best to resurrect the innings but he managed only 31 runs. Amarasekara bowled brilliantly on a pitch which offered plenty of assistance to the spinners. Apart of Amarasekara’s five-fer, Yesith Rupasinghe and Deshan Senevirathne picked up two wickets apiece.

St. Joseph’s managed to retain the Rev. Fr Peter. A. Pillai Memorial Challenge Shield for another year having won the last two encounters in 2018 and 2019. The Josephians extended their wins in the Joe-Pete limited-overs series to 24, while the Peterites have won on 20 occasions. Two matches ended without a result, while one game ended in a tie.