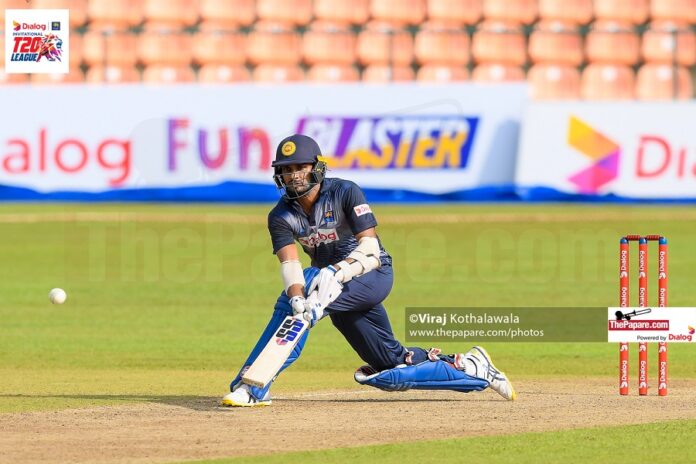 The SLC Grey team recorded their second win in the Dialog-SLC Invitational T20 League 2021, defeating the SLC Reds by 35 runs.

Once again, the coin was in favour of team Grey. Given the fact that the surface was not so batting friendly, the Greys were able to post a comfortable target of 154 runs.

It was yet another sloppy start from Team Grey as the top four batters only made 38 runs altogether, and there was not much of a contribution from the other batsmen either – it was just a sole fight from Dasun Shanaka, who played a fighting knock of 48 runs off 38 balls.

The most from any other batsman was just the vital 20 runs from Pulina Tharanga made down the order.

At the end of the first 10 overs, the Greys were tottering at 61 for 5, and thanks to their Skipper, they were able to post a formidable score.

The pick of the bowling from Team Red was the leg spinner, Seekkuge Prasanna. He bowled a shocking spell of 2 for 9, which saw a brilliant 15 dot balls in it. He was well supported by the left-armer Prabath Jayasuriya, who bagged 2 scalps for 29 runs.

Team Red had a terrible evening with bat as only one of their batsmen crossed the 20-run mark.

Oshada Fernando played a lone hand of 52 runs, but to no avail.

Bowling from Team Grey was on the money right from the word go. Speedster Nuwan Pradeep, young offie Ashain Daniel and fast bowler Lahiru Madushanka all accounted for 2 wickets each, while almost all the bowlers used kept the economy rate under 7 runs.

Being strangled with no runs, the batters from Team Red kept throwing their wickets away cheaply. They were silenced for just 119 runs for the loss of 9 wickets at the end of their quota of overs.

Team Grey are currently cruising undefeated at the top in this tournament.