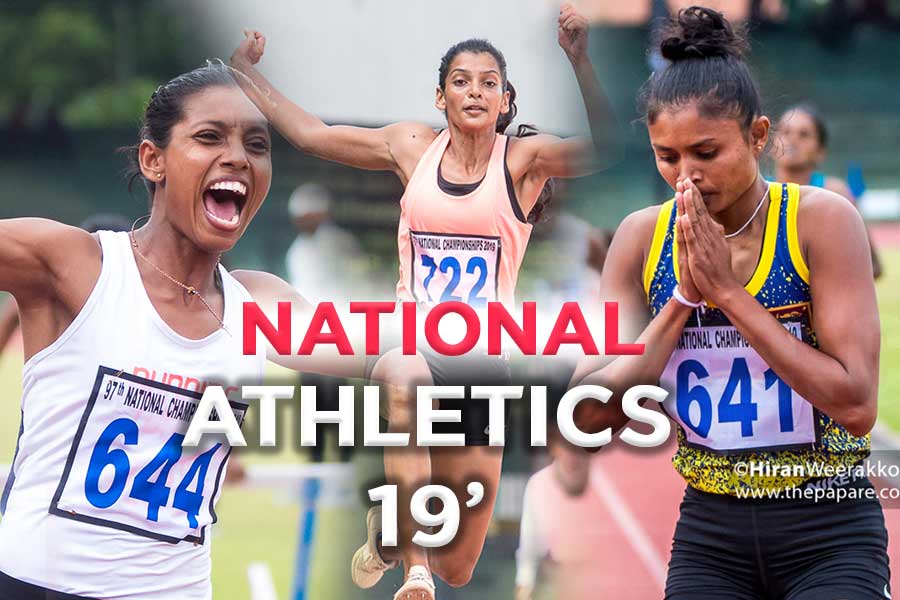 The 97th National Athletic Championship 2019 ended on a high note with 6 New Meet Records, 3 Sri Lankan Records and one equalled Meet Record. After three days of back to back performances, the competition concluded today, 18th August 2019, marking the beginning of the National Athletic Season for the year 2019.

National Record holder Nilani Rathnayake set the pace in the competition with a stunning performance in the women’s 3000m Steeplechase event.  Nilani sustained a timing of 9:50.74 mins for which she was awarded the Best Women’s Performance.

In the Women’s 5000m event, Liyanarachchi left the track with just five laps remaining, giving off an easy win to Hiruni Wijerathne, who managed a time of 16:54.9mins. Wijeratne, the National Marathon champion, further clocked a time of 35:30.0mins in the 10,000m event. The Men’s 5000m event and 3000m Steeplechase event was secured by RMS Pushpakumara, who remained the National Champion for the fourteenth consecutive year.

Liyanarachchi’s third event saw her secure a New National record of 4:15.86 mins in the 1500m event. The record was previously held by NMC Dilrukshi, renewed by Nimali after nine long years. In the 800m event the emerging junior Dilki Kumarasinghe battled hard to a close finish but Liyanarachchi ultimately came out on top.

Ishara Sandaruwan established a New Meet Record in the Men’s Pole Vault event. The previous Meet Record was bettered by a centimetre at 5.01m.

Sumedha Ranasingha, ranking among the top 50 Javelin Throwers in the World was hounded by his fellow competitor RPWL Dayarathna. In the run-up for the South Asian Games 2019, Sumedha barely manage to grab the Gold with a performance of 80.76m, establishing a New Meet Record.

The title for the Overall Best Performer of the National Championship 2019 was claimed by Amila Jayasiri, the current National Record holder with leap of 8.06m in the Men’s Long Jump.

The competition in the sprint events was rather memorable with Shehan Ambepitiya retiring from athletics after making his last move in the 200m event. The once Fastest South Asian Junior athlete bid farewell, passing over the baton to his fellow training buddy Vinoj Suranjaya De Silva who is back at his pace as the fastest 200m runner in Sri Lanka.

The Men’s 100m event saw the tightest of finishes, with sprint king Himasha Eshan taking the title on the third decimal point to defeat Vinoj after both athletes crossed the line at 10.49s.

With an unfortunate injury striking the current Champion Rumeshika Rathnayaka, Lakshika Sugandi snatched the ‘fastest woman’ title, clocking a time of 12.08 seconds in the Women’s 100m.

The 97th National Athletic Championship 2019 was a memorable one with many stand-out performances, comebacks and goodbyes. Stay logged to www.thepapare.com/athletics for more updates.