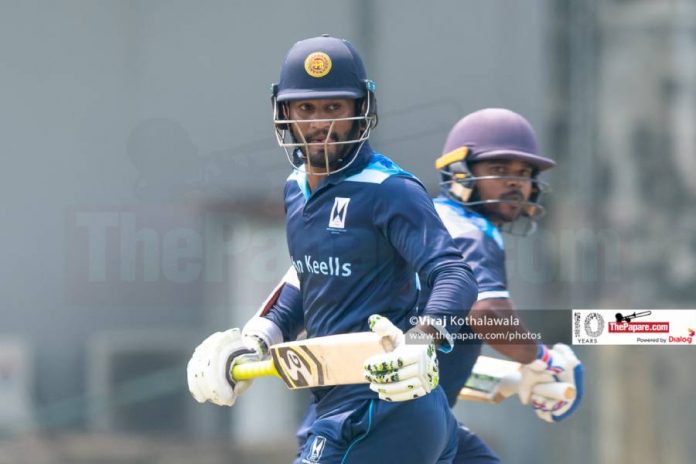 The first semi-finals of the 27th Singer MCA Premier Knock-out Championship 2020 was worked off today, 19th November, at MCA Grounds. John Keells Holdings locked horns with LB Finance for a spot in the finals.

Overnight showers on the previous day made it a tough job for the grounds men at MCA who put in a lot of hard work to get the game underway. The soggy out-field let the game start only at 1.00 pm reducing it to a 32-over affair.

LB Finance won the toss and opted to field first, which was a no-brainer with the conditions. Although it had been under covers for so long and there had been heavy showers throughout the previous night, the wicket looked very dry and flat in nature. But, also it was extremely slow and sticky which put the JKH batsmen in trouble.

Right from the beginning the batsmen were finding it difficult to get their timing right and to muscle the ball square of the wicket.

But, runouts were more of a concern than anything for JKH. Opener Lahiru Milantha was the first to run himself out who was joined by two more JKH batsmen.

It wasn’t the kind of start any team would fancy, which JKH got. Both openers were back in the dugout within the first 5 overs with the score barely past 10. Then back to back wickets at 25 and 26 with Manoj Sarathchandra miscuing one to Kusal Mendis and Test cap Roshen Silva running himself out.

Arguably, Sri Lanka’s most ranked cricketer at present, Test and ODI captain Dimuth Karunaratne held his nerve and put up a valuable partnership with Roscoe Thattil to instill hope in the JKH camp. However, Karunaratne consistently found it hard to get his timing right and being unable to maneuver the field in a shortened game got him frustrated and he tried to get out of jail by going over the top of extra-cover; His efforts didn’t get enough elevation in it. And to make things worse there was LBF’s best fielder Dhananjaya de Silva in that position. De Silva launched himself up-right at the hard-struck ball in a flash and held on to an outstanding catch to get Karunaratne walking back.

Thattil who saw a slow start then got his timing right and played some delightful strokes, mixing it with the very own cheeky little nudge around the corners to add 32 runs to his name. He was the another member of the run-out few in the team.

JKH managed to post only 138 runs before losing all their wickets with 1 ball to go in the innings. Sahan Arachchige delivered a bit of tidy off-spin to top the bowling chart with 2 wickets to his name.

LB Finance skipper promoted himself right up the order after seeing the darkness rolling in above him. But his hopes to finish the game early did not come true as the weather gods had other plans. Right at the conclusion of the 5th over of the LB Finance innings the skies opened up forcing the match officials to push this game to the reserve date which is tomorrow, 20th November. The game will resume from where it was stopped today. LB Finance were at 33 for no loss in 5 overs when the game was brought to a halt.

Match will resume tomorrow from where it was stopped today.