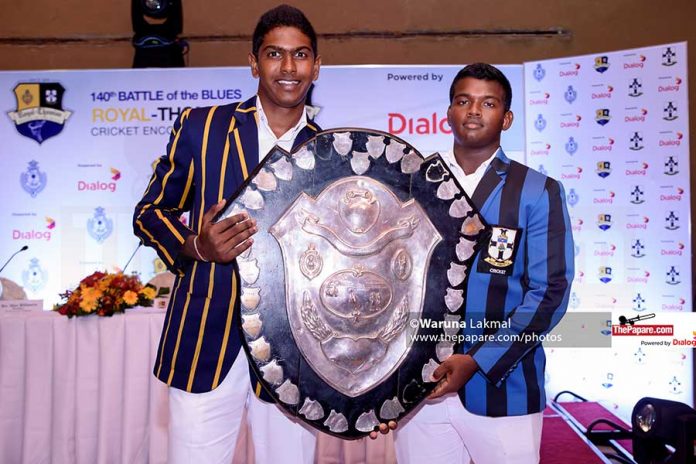 Sri Lanka’s blue-ribbon schools’ cricket encounter, the ‘Battle of the Blues’, between Royal College and S. Thomas’ College will take center stage for the 140th consecutive year when the teams battle it out for the Rt. Hon. D.S. Senanayake Memorial Shield on the 7th, 8th and 9th of March at the SSC grounds, Colombo.

The ‘Battle of the Blues’ is one of the most celebrated school-level sports encounters in Sri Lanka and has a rich and colourful history spanning 140 years. It is also distinguished for holding the honour of being the second longest uninterrupted cricket series played in the world, second only to the annual encounter played between St. Peter’s College, Adelaide and Prince Alfred College, Adelaide, Australia, which began just a year earlier. The first match in 1880, in which only the boys took part, was played on the Galle Face Green, at the present location of the Taj Samudra Hotel. This was the commencement of the centenary series.

When the greatest Royal side took on the weakest Thomian side

The official press conference to announce this year’s encounter was held on Wednesday  (20th February) at the BMICH in the presence of the two heads of schools, B.A Abeyrathne, Principal Royal College and Warden of S. Thomas’ College, Rev. Marc Billimoria, Group Chief Marketing Officer Dialog Axiata PLC Mrs Amali Nanayakkara and other sponsors, players, prefects, teachers and members of the media.

The overall tally between the two schools at present stands at 35 wins for Royal and 34 wins for S. Thomas’; the highly debated match in 1885 where Royal College was all out for 09 runs, with no play on the second day, is considered a win by S. Thomas’ and a draw by Royal. 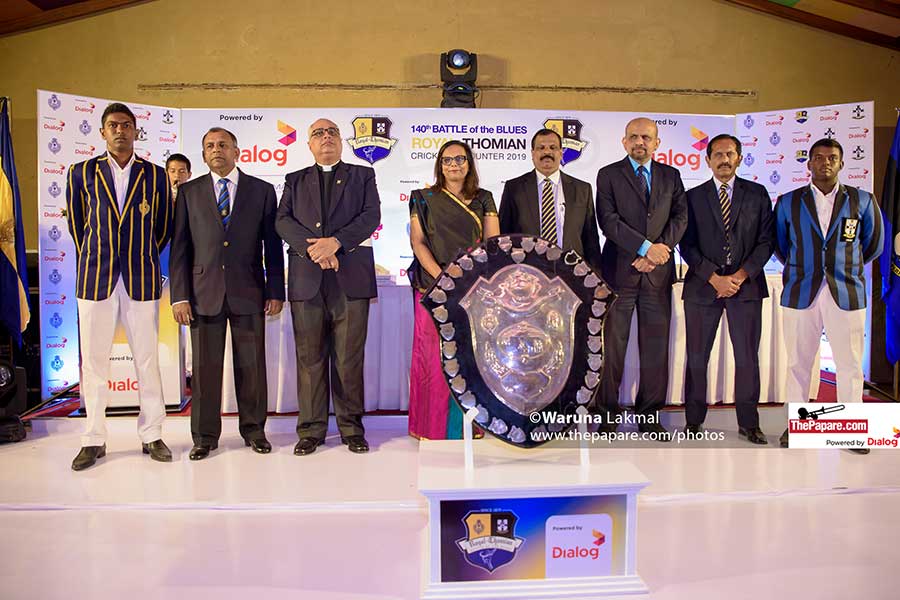 The playing fields of the ‘Royal–Thomian’ have the distinction of producing cricketers who later became eminent heads of state, with S. Thomas’ producing the father of the nation, Rt. Hon. D. S. Senanayake MP and his son, Hon. Dudley Senanayake MP as Prime Ministers of Ceylon, while Royal Produced Hon. General Sir John Kotelawala MP as Prime Minister and the first Executive President of Sri Lanka, H.E. J. R. Jayawardene.

The shield at present sits as the crown jewel in the Principal’s trophy cabinet at Royal College. Interestingly, both the teams will be led by wicket-keepers this year. Left-handed opening bat and stumper Sithara Hapuhinna will captain the School by the Sea, while middle-order batsman and wicket-keeper Kavindu Madarasinghe will lead the Reid Avenue boys.

Since 2015, Dialog Axiata PLC has kindled a successful partnership as the official sponsors of the ‘Battle of the Blues’, extending its commitment to the oldest and grandest schools’ big match in the country.

The proceedings were directed in consultation with the Principal of Royal College and the Warden of S. Thomas’ College, to support the development of cricket to a school in need of cricketing resources.

Since the inception of ‘Play for a Cause’, 3,977,000 rupees worth of cricket gear has been donated to fourteen deserving schools.

Once again, the TV umpire technology will also be in place in order to assist the on-field umpires on all line-calls (Stumpings, Run-Outs) throughout the course of the match.

Both the 140th Battle of the Blues encounter and 44th one-day encounter will be telecast live on Dialog Television Channel No.77, ThePapare.com and My TV.

Cambrians edge past St. Sebastian’s to win the 36th One Day...