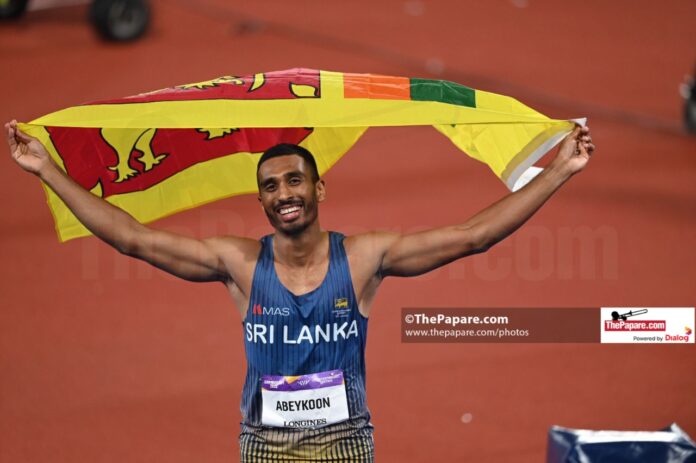 Yupun Abeykoon was crowned the 3rd fastest man at the 2022 Commonwealth Games as he won Bronze in the Men’s 100m event today (4) at the Alexander Stadium, Smithfield, Birmingham.

Abeykoon managed a timing of 10.14s (-0.9m/s) to clinch the Bronze medal in the final. He missed the Silver medal by just 0.01 seconds to Akani Simbine of South Africa. Kenyan juggernut Ferdinand Omanyala won the Gold comfortably with a timing of 10.02s.

In the semifinals earlier in the day, Abeykoon competed in the 3rd heat and placed 4th with a timing of 10.20s. He was challenged by the athletes from lanes number 8, 1 and 6 but Abeykoon held his composure to complete the race in 4th place.

Abeykoon progressed to the final as one of the two fastest non-automatic qualifiers. This was the first ever instance of a male Asian athlete qualifying for the 100m finals in Commonwealth Games history. The top two athletes of each semifinal (3 semifinals) progressed to the grand final while the last spots in the final went to the next fastest athletes.

The next Sri Lankan to compete in the track and field will be Gayanthika Abeyrathne in the 1500m first round and Sarangi Silva in the Long Jump qualification on 5th August.