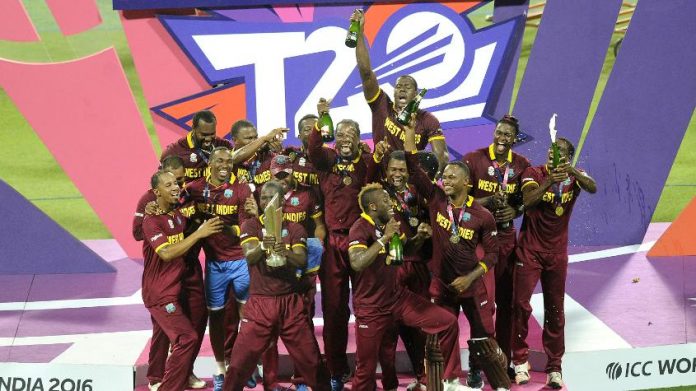 The renaming decision is aligned to the Global Cricket Strategy which will be launched in early 2019, in which the shortest format will not only be used as the vehicle to globalise the game, but to also enhance its profile and status and ensure its status is at par with the pinnacle events of the other two formats.

The ICC Board had already approved that all T20s between its Members will be granted T20I status. It then introduced a regional qualification process that provides a pathway to all its 104 Members with an opportunity to play and win the World Cup.

The renaming of the event is also aimed at cementing the importance this event holds in the international cricket calendar and ensuring parity across all three formats of the game.

The decision to rename the event was backed by international captains, while South Africa’s Faf du Plessis announced that the event in the last quarter of 2020 in Australia will be his final ICC event.

“Representing your country in a World Cup is a huge honour, and winning the ICC Cricket World Cup in 2015 on home soil was an incredible feeling. Now, we get the chance to take on the world’s best T20 teams in Australia as part of this showcase event.

“There’s still plenty of preparation ahead for the tournament, but we’re looking forward to the challenge and playing in front of our fans in Australia.”

India women’s team captain Harmanpreet Kaur, whose side is ranked in top-five of the shortest format, said: “This is an exciting tournament that teams get to play. It has brought together the best from around the world over the years and so I think the change in name is a natural progression.

“I’m sure this tournament will only grow in popularity in the coming years with the thrilling brand of the game that has been on display in different editions of the tournament.”

Bangladesh women’s team captain Salma Khatun said: “This has always been a global tournament and one that teams look forward to, but the renaming gives it a different feel and I welcome it. T20I cricket is the most popular form of the game with countries all over the world playing the format.

“We also have a fine qualifying system for this tournament, so I think it is a prudent step to term it as a World Cup. Our players look forward to playing in future editions and congratulate the ICC for enhancing the image of the tournament over the years.”

England women’s team captain Heather Knight, whose side is ranked second in the shortest format, said: “We’ve always loved playing in this tournament and with the increasing focus on T20I cricket, it is bound to become even more fiercely contested. It has always been a global event and we’ve see a number of countries perform in it across the years so the change in name makes sense.

“It’s always been a World Cup to us and I’m sure to other teams as well so we look forward to playing in the ICC Women’s T20 World Cup in 2020.”

New Zealand captain Amy Satterthwaite, whose side is ranked third in the women’s T20I rankings, said: “It’s a natural progression to call the pinnacle event in T20 cricket a ‘World Cup’ in my opinion. Twenty20 cricket is exciting both to play and for the fans; it’s a great vehicle to take our sport to an even wider global audience.”

Pakistan men’s team captain Sarfaraz Ahmed, whose side is ranked number-one in the MRF Tyres ICC Men’s T20I Team Rankings, said: “By renaming the World T20 as T20 World Cup, the ICC has enhanced the reputation, value and prestige of this extremely difficult and challenging tournament. This event has previously been referred to differently in marketing and digital campaigns, television broadcast, media reports and, as such, there was no clarity on where this event was ranked amongst the other ICC events. I am sure this amendment will give the event its due credit and well-deserved identity.

“Pakistan is the best T20I side in the world and I am sure we will be an even better and stronger outfit when the ICC Men’s T20 World Cup takes place in the second half of 2020. After next year’s ICC Cricket World Cup, we will shift our attention to the 20-over format and will aim to add another T20 World Cup to our collection.”

South Africa men’s team captain Faf du Plessis said: “Playing in any World Cup always holds higher stature to the fans and cricketers aiming to be selected, so this change will definitely get more people interested in the respective men and women’s World Cups.

“The 50-over World Cup is the pinnacle event that all players strive towards, but I think the T20 World Cup will be the perfect platform for players to put up their hands for the 50-over format. Every player dreams of playing in a World Cup in their career and this will give them that extra opportunity.

“Personally for me, the ICC Men’s T20 World Cup in 2020 will probably be my last ICC event after the World Cup in 2019, so it does give me one last opportunity to vie for a World Cup medal if it doesn’t happen in 2019.

“It will give players who often call time on their careers after a 50-over World Cup another shot at glory.

“Every format has an important part to play in the growth and sustainability of World Cricket. The Test Championship is going to revolutionalise the way that bi-lateral series are contested and will give relevance and stature to every Test series, this is going to help keep this format relevant and entertaining.”

The Windies men’s team captain Carlos Braithwaite, whose side will defend the title they won in Kolkata in 2016, said: “I think the change in name is a brilliant initiative, it will now make the women feel equal and part of the entire spectacle, without segregation of gender, it’s The Cricket World Cup, because cricket is played by both genders.

“The growth of T20 cricket has been remarkable. I’m not sure how many people could have predicted how far the game or the format would’ve risen when it was first introduced, but certainly it has taken the sport to new markets, pushed it to new levels. As a result of this, the other two formats in cricket have benefited because players now come with an attacking nature, and it’s continuing to push the bat vs ball debate, with batsmen continuously trying to find new ways to conquer bowlers, and as a result, bowlers are getting smarter, so it’s pushing the level of cricket being played now.”

“We are particularly delighted about the rebranded event’s potential to attract significant investment as well as more young girls and women in Zimbabwe to the game, thanks to the huge attendances and television audiences associated with a World Cup event.”