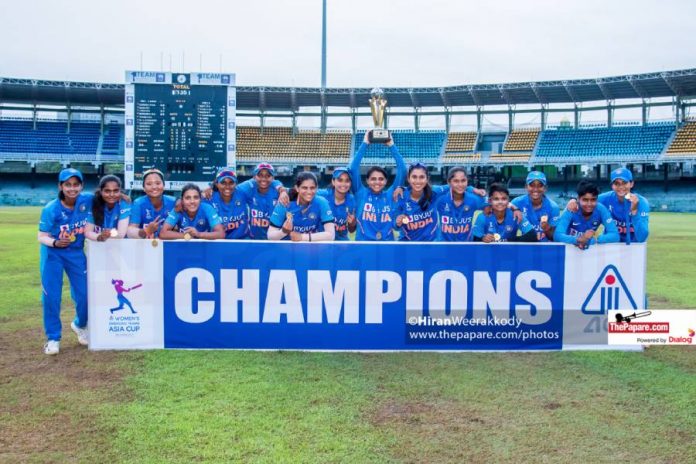 India women secured the inaugural Women’s Emerging Teams Asia Cup 2019 championship as they registered a 14-run victory against Sri Lanka today (29) in the final at the R Premadasa International stadium.

The Indian Emerging team qualified to the final beating Sri Lanka and Pakistan in the group stages, while Sri Lanka sneaked past Bangladesh with a victory against them and a higher net run rate.

Indian skipper Davika Vaidya won the toss and decided to bat in the crucial fixture, but soon the Sri Lanka bowlers were all over the visitors as they were reduced to 5 for 54 in the 19th over. 18 year old spinner, Kavisha Dilhari, who has already played 10 internationals for Sri Lanka, was the chief destroyer of the Indian top order as she ran through the Indians with 3 wickets, including the valuable scalp of opposition captain Devika Vaidya.

After the initial burst by the hosts, the Indians recovered well to post a total of 175 at the conclusion of 50 overs as their last 4 wickets contributed 90 runs with match defining knocks from Tanusree Sarkar (47) and Simran Bahadur (34). 17-year old from Seenigama Sachini Nisansala came to the party late in the innings with 2 wickets too.

The Sri Lanka innings could not be started in due time as the rains arrived and delayed the start of the 2nd innings by more than an hour. The Sri Lanka innings was eventually reduced to 35 overs and they were given a revised target of 150 runs according to the D/L method.

As it was in the group stages, the Sri Lanka top order, except for skipper Harsitha Madavi failed again in the chase, leaving it all to the skipper and lower order batters. Madavi, who scored back to back half centuries in the first two group stage games, took the responsibility of guiding Sri Lanka home again and made a composed 39 off 64 ball while managing important partnerships with the lower order.

Who will be the champions?

All rounders Lihini Apsara and Madushika Lakmali chipped in with useful cameos but that didn’t help Sri Lanka to cross the line as they fell short by 14 runs, handing India the inaugural Women’s Emerging Asia Cup victory. Tanujar Kanwar and Devika Vaidya registered 4 wickets each in the game.

Century and 9 wickets for Mihiranga Fernando