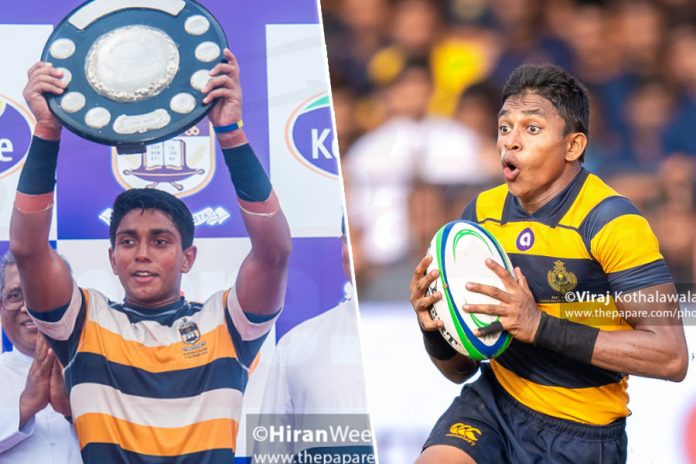 With one week to go in the Singer Schools Rugby League, the question that has been doing the rounds is as to who will walk away with the 2019 title. With an exciting second round nearing its end, two schools, Royal College and St. Peter’s College are in contention for the 2019 title.

It will all come down to the final fixture where Royal hosts St. Joseph’s at Royal Complex on the 29th.

ThePapare looks at all the possibilities for each of the schools in this year’s Singer Schools Rugby League.

Here’s how the points table stands after 9 weeks of action. 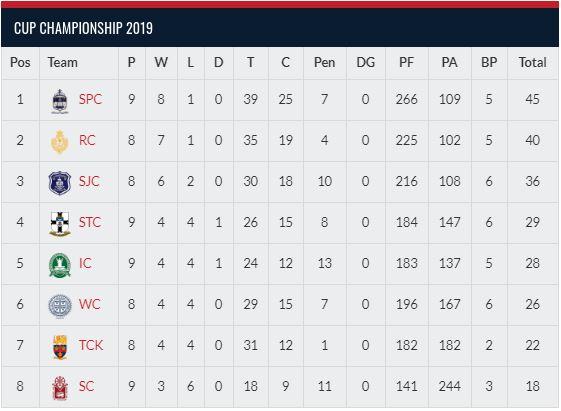 Due to the overlap as a result of the Bradby second leg weekend, Royal, St. Joseph’s, Trinity and Wesley have one more game to play while the rest of the teams have completed their quota of 9 games.

St. Peter’s who finished with just a single loss to S. Thomas’ in the first week, are on top of the table with a total of 45 points, which includes 5 bonus points. Last week’s 23-21 win against St. Joseph’s has given them the best possible chance of winning this year’s crown.

St. Joseph’s will have to win their final week game against Royal College at Royal Complex.

If Royal win the game against St. Joseph’s, but don’t get a bonus point (for scoring 4 tries or more), St. Peter’s will be crowned champions, because it was St. Peter’s who won the match between the two sides.

The two-time reigning champions from Reid Avenue have a chance to enter the history books to be crowned as league champions for a third consecutive time. No team in the 21st century has had the privilege of winning the league title for three back to back years.

For Royal to be 2019’s league champions:

Royal College has to win their final league game against St. Joseph’s with a bonus point (score 4 tries or more) if they are to defend their title. Currently at 40 points, a bonus point win will take them to 46 points, a single point ahead of St. Peter’s.

If Royal end up winning the game but fail to take the bonus point, St. Peter’s will be crowned champions since the Peterites were winners in the game between the two sides.

If Royal wind up on the losing side, they will be pushed to 3rd place if they do not get the two losing bonus points (scoring 4 tries or more & losing within 7 points or less).

If the Royal-St. Joseph’s encounter ends up in a draw, the league will still go in favour of St. Peter’s.

The favourites at the end of the 1st round had their unbeaten run halted by Wesley College in the second week of the second round. Since then the path has been rough for the Josephians, who succumbed to their arch-rivals St. Peter’s College last weekend at Bambalapitiya.


With the loss, the Josephians have no option but to forget their league title hopes, but to see where they could finish at the end of the season.

For St. Joseph’s to finish 2nd, they need to win their final game against Royal without conceding two bonus points.

St. Joseph’s, who currently have 36 points, can built up to 41 points, if they get the win. Even if Royal earn themselves 1 losing bonus point, St. Joseph’s will still occupy the second spot based on the outcome of the Royal-St. Joseph’s game.

St. Joseph’s runner-up spot will be further cemented if they get bonus point on the day (score 4 or more tries).

If Royal end up getting two bonus points despite losing, St. Joseph’s will have to be content with a 3rd place finish this season.

A slight chance existed for Wesley to go towards a 3rd place finish in the Singer Schools Rugby League, provided St. Joseph’s lost to Royal on Saturday. However, their loss to Science last week dashed their hopes, with their aim now being to finish 4th.

Since both S. Thomas’ and Isipathana have completed their 9 games, a win against Trinity College on the 29th will ensure that Wesley get the chance to finish on top of S. Thomas’ with a total of 31 points. If they do, this will be Wesley’s best ever finish after finishing 4th in 2017.

A win for Trinity against Wesley will mean that they will be elevated from 7th to 6th in this year’s league table.

Isipathana College, a team that has always being amongst the top teams, might be pushed further down if Wesley end up beating Trinity. Just like last year, Isipathana are 5th in the league table but a Wesley win, will mean that Isipathana finish 6th.

Isipathana has not dropped below the top 5 since 2013.

Last ditch Nanayakkara penalty seals it for the Petes