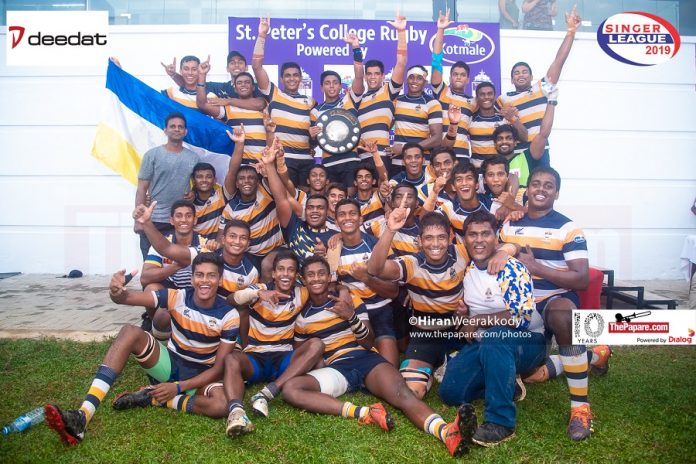 Thenuka Nanayakkara pierced the posts from in front to defeat St. Joseph’s College 23-21 in the penultimate week of school’s rugby league action and helped the Peterites regain the Fr. Basil Wiratunga Shield after a lapse of four years.


The league title, however, hangs in the balance as Royal College will require a bonus point win in the final week if they are to retain the Schools Rugby League and deprive the Peterites of a steal.

The Josephians kicked off what was a do or die encounter for both sides — with the league title on the line, and the Fr. Basil Wiratunga shield up for grabs.

It took the Josephians just five minutes to get on the board with Santhush Algama notching over an early penalty as Mohomed Nizran was caught impeding a kick chaser. (SPC 00-03 SJC)

Visiting five-eight Algama slotted home from in front to regain the lead soon after, however the first half was heading towards a lackluster end with neither team able to make further inroads until after the final hooter.

It was the visitors who struck the final blow, with a try from Tehan Karunanayake. Joes halfback Rashane Goonawardena set up the winger past the 35-minute mark, following a trade mark number 8 break from Josephian captain Tharindu De Alwis.

Algama made no mistake with the resulting conversion, drastically changing the Peterite halftime team talk.

A stern half time talk made the difference for the hosts as they came out hitting the ground running.

Indiscipline let down the visitors time and time again, this time, hooker Thangiah penalized for shoulder charging his opponent. Nanayakkara made no mistake, cutting the lead further from the tee. (SPC 8-13 SJC)

Mohamed Nizran was the next to get on the scoreboard as the lanky lock-forward found his way to the try line, diving over from the tail of a maul. Nanayakkara continued his splendid game with the boot, regaining the lead for the home team. (SPC 15-13 SJC)

Indiscipline cost both teams on the day, this time as the hosts flanker Y.N Fernando saw yellow in the 54th minute of the game. The visitors scored off the resulting penalty as Hashitha Wijesekara barged his way over the line from close range.

Algama failed with the conversion as the resulting kick bounced off the uprights, with just 3-points separating the two sides. (SPC 15-18 SJC)

A see-saw second half saw the lead continue to change hands as neither team let each other get out of reach.

Shenol Silva punished the Josephians for not clearing their lines following their try as the fleet-footed winger pierced the fragile visiting defense to score the all-important third try, as the fixture of the week continued to live up to its billing.

Nanayakkara failed to add the extras, once more, from the 15-meter line as the Josephians fell back once again by two points with a little more than 10-minutes left on the clock. (SPC 20-18 SJC)

The home side was penalized in front of the posts as the game took yet another twist with time rapidly running out. A no brainer, to opt for points, Santhush Algama made no mistake from close range, as the visitors grabbed a single point lead, in what was a thrilling game of rugby on a Saturday evening.

Joes second try scorer Wijesekara went from hero to zero as a sudden rush of blood, saw him being sent off the field for an unwarranted penalty.

This single man advantage played into the hands of the hosts as they pinned the visitors down in their own half with time running out.

The Peterite flankers jackaled over at the break down, winning a decisive penalty on the stroke of full time. Nanayakkara made no mistake with the final kick of the game to win the Fr. Basil Wiratunga Shield and keep their hopes of a Schools’ Rugby league title resting in the hands of the Josephians – If Joes beat royal on the final match day, St. Peter’s College will be crowned league champions.