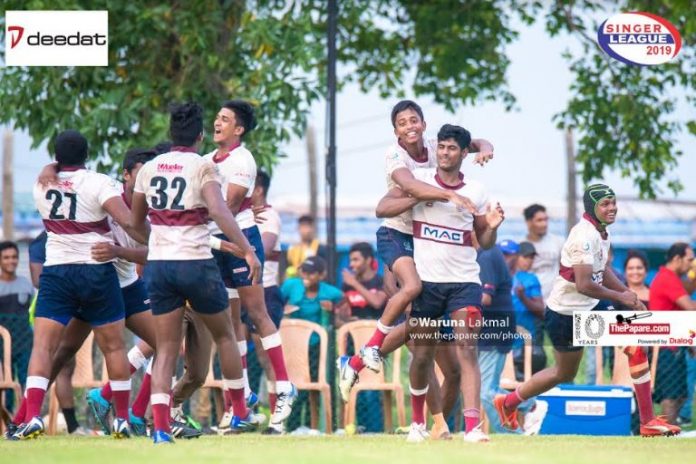 Science College created a big upset as they defeated the high-riding Wesley College 26 (4T,2C) points to 21 (3T,1C) in their  2019 Singer Schools Rugby League encounter played at the Air Force grounds in Ratmalana earlier this evening.

The Double Blues made a lot of changes as a few seniors were benched as coach Paul Toia gave some much-needed game time to the youngsters. Dulaj Madagedara kick-started the last game for the boys from Mount Lavinia.

Science got their first chance of the game when they were awarded a few penalties. Wesley managed to defend some attacking moves from Science College but they couldn’t halt the powerful pick drive from Rashmika Kariyawasam as he opened up scoring for the home side. The conversion was on the spot by Kavindu Cooray as he perfectly judged the windy conditions. (SC 07 – 00 WC)

Wesley were clumsy with their handling as errors happened regularly in the game which continued to be a stop-start affair although Wesley were lucky not to concede more than one try.

It was some cheeky thinking from the skipper Murshid Zubair who initiated a grubber kick and Shehab Packeerally picked up the ball and opened it up to Tharusha Jayaweera, as he finally made a timely offload to his skipper and he went over for the Double Blues. Zubair converted his own try to bring the game to a deadlock. (SC 07 – 07 WC)

ThePapare Most Popular Schools Rugby Player is back!

Science replied straight away as some silky hands from the Science backs opened up space to the second rower Thsira Meegoda and he bamboozled the experienced fullback Zubair with a superb sidestep to scored the second try for Science in the last play before the break.

Wesley came back strongly in the second half as they played few phases patiently in the close quarter and the prop forward Dineth Dinuja barged his way through the Science defence to score for the Double Blues. Skipper Zubair managed to add the extras to take the lead for the first time in this game. (SC 12 – 14 WC)

Wesley were caught napping as they didn’t play for the referee’s whistle whereas the Science scrum-half Rasanga Weerasinghe made a long cut out pass to Imash Pitiyage, who made a cheeky kick and managed to collect it to score a superb try for the home side. Cooray made a peach of a kick to add the valuable extras to further increase their lead. (SC 19 – 14 WC)

The nippy scrum half Weerasinghe made another big impact on the game as he made a box kick and it was collected by Hasaranaga Akmeemana and a crucial offload to the speedster Navindu Silva was good enough for him to rip through the Wesley defence to score the bonus point try. (SC 26 – 14 WC)

Wesley replied straight away scoring through the experienced campaigner Samuel Ogbobor as he touched down under the post to keep the game alive. Zubair quickly added the extras but a superb defensive performance by Science meant they managed to clinch their first victory in the second round and end their 2019 campaign on a high.