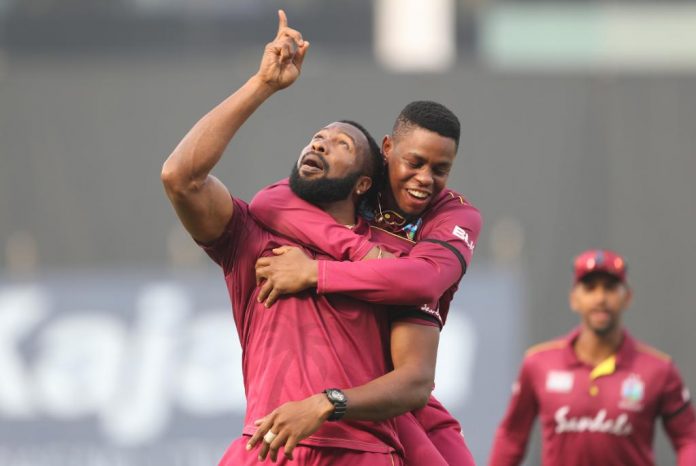 Gareth Delany and Kieron Pollard shined with the bat and ball respectively, but it was the rain that had the final say in the second T20 International played between West Indies and Ireland on Saturday, 18 January.

The game was called off after rain intervened for the third time in the day, with West Indies’ placed at 16/1 in the third over of their revised chase of 152 in 19 overs. Lendl Simmons showed some intent early on, dismissing Paul Stirling for a six and a four in the first over, before the bowler had the last laugh as the right-hander mistimed a slog to Harry Tector at deep mid-wicket. Opener Evin Lewis (2*) and Shimron Hetmyer (4*) remained unbeaten.

Earlier West Indies skipper Kieron Pollard won the toss and put Ireland in to bat. Sheldon Cottrell conceded just a single in the first over before Romario Shepherd, the debutant had Kevin O’ Brien caught off a leading edge at mid-off to earn his maiden T20I scalp. It started to drizzle soon after and play resumed after an hour long break. Cottrell then had Stirling caught by Hetmyer at the deep square leg fence for 17 to round off a fine opening spell.

The highlight of the day though came through the blade of Gareth Delany, who whacked four consecutive sixes off Hayden Walsh, the leg-spinner, during the tenth over of the innings. Walsh overpitched twice, Delany lofted it over his head; the bowler went short, and the right-hander flat-batted him to the same part of the ground, before finishing it off with a full-blooded pull over mid-wicket to put his team at a strong position of 87/2 at the halfway stage.

However, Pollard, replacing Walsh an over later, produced a fine spell to put breaks on the scoring. He first had Delany caught at long-off to cut short his entertaining 22-ball-stay on 44, before accounting for the well-set Andy Balbirnie (36) in his next over. He then dismissed Gary Wilson (5) and George Dockrell (2) in quick succession as Ireland slumped to 133/6. Another rain interruption, though a shorter one, had the game reduced to a 19-over affair and Sheldon Cottrell’s miserly final six balls yielded just three singles followed by a caught behind and two run-outs.

Pollard was the most successful of the pack, returning with 4/25, while Cottrell finished with an impressive 2/10 in his four overs. Ireland, on virtue of their thrilling win in the high-scoring series opener have maintained their 1-0 lead, with the decider to be played on Sunday, 19 January at the same venue.